Posterior reversible leukoencephalopathy syndrome (PRES) is a cranial disorder linked to hypertension usually presenting with symptoms of headache, nausea and vomiting, seizures and visual disturbance. We present a rare case of PRES jointly managed by neurology and neurosurgery with an EVD and antihypertensive therapy in a 46 year old female who presented with hydrocephalus at Newcastle Upon Tyne Hospitals. Cases of PRES presenting in this way were rare with only 8 cases being described in the past. These cases tend to be in a much younger patient subset who were more often male. Management has varied in the past described cases and more literature is required to reach a concensus.

Posterior reversible leukoencephalopathy syndrome (PRES) is a brain disorder that affects the cerebral white matter and usually presents with symptoms of headache, nausea and vomiting, seizures and visual disturbance [1]. It tends to be found in patients with renal failure, extreme fluctuations of blood pressure, eclampsia, autoimmune conditions or who are taking cytotoxic drugs/immunosuppressants. The pathology has not yet fully been described however it seems to be linked to endothelial dysfunction [2]. Very few cases have been described in which PRES has presented with hydrocephalus, particularly in adults [3]. We present a case of PRES which presented with hydrocephalus in a 46 year old female managed in Newcastle Upon Tyne Hospitals.

The patient is a 46 year old female who presented with a 3 day history of vomiting and headache. Her CT scan demonstrated hydrocephalus and she was transferred to the regional specialist neurosciences unit for neurology and neurosurgery. She was hypertensive at 273/150 prior to transfer and 188/120 on arrival. An external ventricular drain (EVD) was fitted by the neurosurgical team on transfer and the patients blood pressure was lowered with a combination of amlodipine, bisoprolol and doxazosin. A MRI brain showed patchy and early confluent T2 hyperintensity associated with swelling affecting the pons, cerebellum, midbrain, deep grey nuclei and less extensively the supratentorial white matter consistent with a diagnosis of PRES. After tight control of blood pressure the patient recovered well, the EVD was removed and she was discharged (Figures 1 and 2). 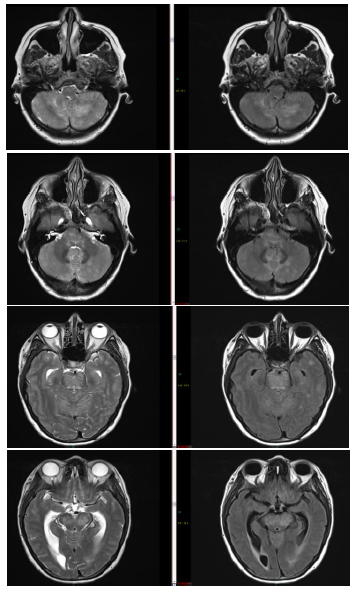 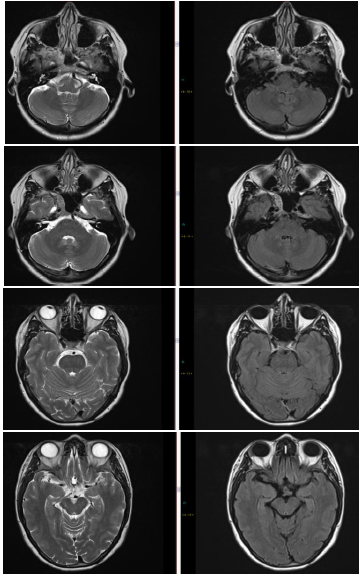 Very few cases of PRES presenting with hydrocephalus have been described, particularly in adults. Searching PubMed with the keywords “posterior reversible encephalopathy syndrome” “PRES” “hydrocephalus” and “adult” yielded 8 papers discussing cases where hydrocephalus was identified in adults. Of these cases, the main precipitating factor was hypertension, with cases reporting immunosuppressive therapy [4], renal hypouricaemia [5] or, in one case, subarachnoid haemorrhage with an over-draining ventriculo-peritoneal shunt leading to PRES [6].

Variations of PRES are also beginning to be described since the first case of PRES was reported in 1996. Since infratentorial variations of PRES, such as the case reported here, have been illustrated with rapid rises in blood pressure, leading to oedema focused around the brainstem and cerebellum. The majority of these cases, however, have been in younger males rather than females, the reason for which is still not understood [7]. Development of oedema in the infratentorial region and especially the brain stem could explain why hydrocephalus develops, where oedematous tissues cause compression of the ventricular system thus blocking outflow. The management described in the 8 cases with concurrent hydrocephalus varied. The patients were treated either medically with surgical intervention such as external ventricular drain insertion [8, 9] or by cranial decompression [3, 10], or medically alone with best supportive care including anti-hypertensive therapy and withdrawal of immune suppressants if used [4, 5, 8, 11].

All treatments had positive outcomes with a seemingly full resolution of oedema within the parenchyma and reversal of hydrocephalus, but comparison between medical and surgical management is difficult to make as there is no long term follow up or randomisation of treatment given. Based on the cases reported, surgical approach alone was not sufficient and the initiating process, be it hypertension, immunosuppression or renal causes, needed to be treated to remove the precipitant. However the question remains that if the precipitant is identified and treated quickly, would the need for surgery be removed, or is decompression still necessary in the short term to prevent long term irreversible changes. Given the rarity of PRES, the chances to perform randomised trial are limited, however more research is required to improve our understanding of the best way to manage the condition when it presents in this way.