Intrahepatic Pseudoaneurysm of Right Hepatic Artery after Gunshot Thoracic-Abdominal Injury. A Case Report and Review of the Literature

Pseudo aneurysms of the right hepatic artery are uncommon, appearing in approximately 1% of hepatic trauma cases, and most are extrahepatic (80%) and have a late-onset [1]. Although they are usually asymptomatic, they should always be treated because of the high risk of complications, especially breakage. We present a case of post-traumatic hepatic artery pseudoaneurysm that was successfully treated using this open surgical technique. Intrahepatic pseudoaneurysm (IHPA) following shotgun injury is rarely reported. Timely diagnosis is crucial. We advise keeping in mind the possibility of IHPA, when dealing with high-grade liver injury. CT is recommended before removal of perihepatic packs, as it may pick up a lifethreatening pseudoaneurysm.

For the treatment of visceral pseudo aneurysms, it is necessary to know all therapeutic options and to evaluate the convenience of each one. In the absence of sophisticated imaging and intra-arterial embolization, we contribute by adding our experience to the case reported in the bibliography. In conclusion, this study shows that IHPA develops in patients after traumatic liver injury. To avoid potentially life-threatening hemorrhages from a hepatic pseudoaneurysm after trauma, it seems appropriate to now manage all surgical techniques in the absence of angioembolization service.

A 53-year-old man presented to the emergency department, following a gunshot wound (GSW). He had a patent airway, but he was tachypneic, agitated, confused, and pale. His blood pressure was 80/40 mm Hg and pulse rate 120 per minute. The right radial pulse was impalpable due to the hemorrhagic shock. There was a 4-cm wound in the anterior-posterior with VI-VII-VIII ribs fractures to the right side, at the posterior arch of the cage, with access to the large amount of blood (500 ml) and air from the two holes, both incoming and outgoing trajectory. The abdomen was tense and tender all over. Abdominal ultrasonography was positive for hemoperitoneum. A right-sided intercostal drainage tube was inserted for hemopneumothorax.

Exploratory laparotomy was carried out (Figure 1). Two liters of blood were found in the peritoneal cavity due to a grade III-IV liver laceration with actively bleeding. The wide rupture of right diaphragm (20 x10 cm with unruly edge) was found; diaphragm suture and its restoration were done. Suturing of the liver did not control the bleeding. Thus, a decision was made to insert perihepatic packs.  (Figure 2). A drain was left near the Morrison's pouch. The patient is sent to the intensive care unit, still intubated and undergoing intensive therapy, stabilizing it in all components to prevent the mortal triad.

On the first postoperative day one liter of blood was recovered from the abdominal drain. The patient begins to stabilize in all parameters and BP -130/80mmHg, but it was temporary and was accompanied by increased leakage from the abdominal & thoracic drainage and with hemodynamic instability and 12 h after surgery was registered by thoracic & abdominal drainage about 1200ml &1300ml hematic leak. On the third postoperative day and before shifting the patient to the operating theatre for packs removal, CT of the abdomen was done; no evidence of IHPA at that time. There were suspicions of intrahepatic vascular damage but the presence of intrahepatic compresses made it very difficult to identify them.

Dering the surgery, we have removed perihepatic compresses and made toilet of the abdominal cavity. The patient was treated in ICU and after 24 hours is extubated. After 3 days he is transferred to the surgery ward and continued treatment & monitoring. When everything was moving towards normal progress towards the patient's improvement, on the 21st postoperative day, three weeks after surgery, in the operated wound, was observed the hematic coagulated secretions in large quantities (Figure 3).  In the US examination was found; a hematoma button in the level of the liver damage which confirmed the Angio –CT; pseudo aneurysm to the right hepatica arteries at the level of the VIII segment (Figure 4, 5).

In this situation we decided to perform permanent stopping of bleeding by Angioembolization tactics, but at our hospital this service does not exist. Before the surgical decision for relaparotomy we were ready to choose the classical way to perform: a- Ligature of the damaged artery if achieved; b- Ligature of the right hepatic artery; c - Segment resection to the right hepatic removed. The patient was operated for fourth time that becomes; we have done ligature of the right hepatic artery the level of the VIII segment of the liver and toilet and drainage of abdominal cavity. Post operator situation of the patient was uneventful and discharge from hospital after two weeks (Figure 6, 7). 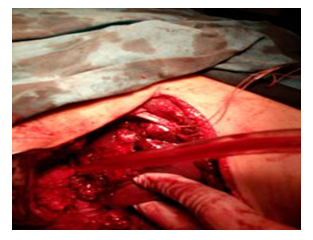 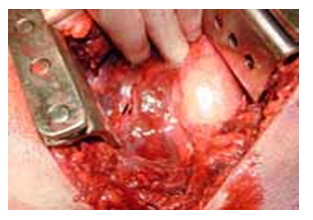 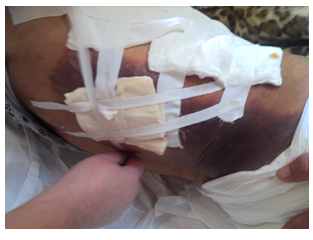 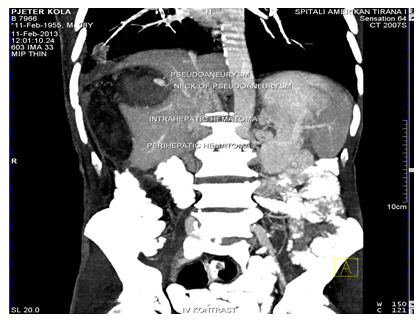 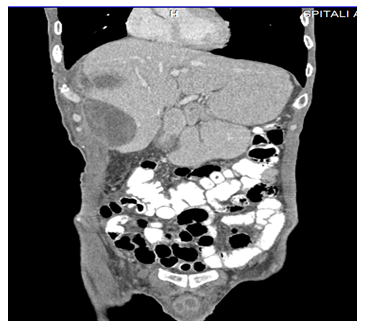 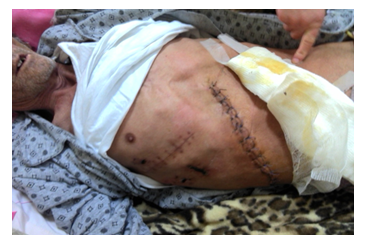 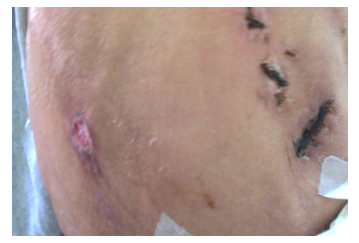 An intrahepatic pseudoaneurysm (IHPA) is an unusual but potentially lethal complication after blunt or penetrating liver injury [2, 3]. A pseudoaneurysm is a false aneurysm that develops from a leakage of an injured artery into the surrounding tissues forming a cavity outside the artery. It can be distinguished from a hematoma as it continues to communicate with the artery resulting in a high-pressure cavity with the risk of rupture [4]. A pseudoaneurysm can develop anywhere in relation to an injured artery, but common sites are hepatic or splenic artery branches following trauma [5]. Previous studies have found that the risk of developing an IHPA after liver trauma is 1, 2-6, 1% [6]. Endovascular embolization is currently the treatment of choice for IHAP in hemodynamically stable patients, while unstable patients or those with failed/absent angioembolization are candidates for surgery [7]. Surgery involves ligation of the offending hepatic artery. When bleeding continues even after ligating hepatic artery, hepatectomy may be warranted to control bleeding.

In present case report, our patient who had IHAP in replaced right Hepatic artery with hemodynamic instability underwent surgical ligation, which controlled bleeding [8]. This Case reports, sounds like a lecture to manage the liver damage after GSW. The basic principle in management of trauma patient with penetrate thoracic-abdominal trauma was performed like as; primary survey; the Damage Assessment; Management of the hemorrhagic shock and the dilemma of when and how??? Secondary primary. The use of DCS techniques in the temporary control of the hemorrhage like as; Pringle maneuvers; Manual compression of the liver; Packing of the liver. This approach has shown a survival rate of approximately 60%, compared to the 11% survival rate of conventionally treated patients in Rotondo and Schwab’s initial study [9, 10].

Duchesne et al. reported improved outcomes with the addition of damage control resuscitation to damage control surgery (74% vs.55%) [11]. On the third postoperative day and before shifting the patient to the operating theatre for packs removal, CT of the abdomen was done. After 48h was operated for the second time to remove perihepatic compresses and made toilet of the abdominal cavity. Nicol et al demonstrated that the duration of packing is not associated with these complications and that a second-look laparotomy should only be performed after 48 hours [12]. The dilemma of when and how can we realize the permanent control of the hemorrhage, of arterial bleeding in the liver, as segmental or lobar level. The best way is NOM to use of interventional radiology when there is possible. The classical surgical Technique we realized the permanent control of the hemorrhage by selective hepatic artery ligation; lobectomy or segmentectomy. With selective vascular ligation, if achieved; Intermittent release of the Pringle clamp with effective suction may allow identification of deep bleeding sites and control by direct suture [13, 14].

In surgery, having real-time management equipment or techniques is good for the trauma surgeon, who does both real-time assessment and treatment of the patient with the world's best proven techniques. But their absence, although for some may be paradoxical, for us they are a justifiable absence, but this does not prevent us, for the benefit of the patient, to use traditional but valuable techniques. Maybe paraphrasing is better to know than to have. Knowledge of traumatized patient management techniques according to the ATLS protocol, and the use of resuscitation surgery principles as part of the DCS principles are far more important in the day-to-day work of any trauma surgeon.

Written informed consent was obtained from the patient for the publication of this case report and any accompanying images.

We have no sources of funding to declare in this study.