Kaposi Sarcoma: Review and a New Promising Treatment with NILS

6University of Medicine of Tirana, Albania

Kaposi Sarcoma is an endothelial malignancy most affecting the skin, mouth, GI tract, and respiratory tract. It can result from immunocompromised conditions such as AIDS, organ transplant, or classic or sporadic in older Easter males and Mediterranean’s, all ages widespread in Africa. It has a typical association with HHV-8 and HIV-1 infection incites flare-ups. KS can be aggressive by involving the respiratory system by causing severe dyspnea and hemoptysis. Herein, we present a 73-yearold patient presenting with some read-brown solid lesions over the elbows. His history revealed unprotected sexual activity with different partners. The physical examination showed lymphadenopathy and oral candidiasis. The laboratory test showed a CD4 level of 270/mm3 and a viral load of 150 000 copies/mm3. The histopathologic examination of the lesions demonstrated Kaposi Sarcoma. The lesions were treated with NILS therapy which converted the lesions into crusts and then scars. Since then, there has been no repetition of the lesions, but new lesions of KS have appeared in other body skin areas. This case report emphasizes the importance of NILS therapy as a promising treatment of Kaposi Sarcoma in the future.

Kaposi Sarcoma is an endothelial malignancy most commonly affecting the skin mouth, GI tract including the anus and respiratory tract. KS has atypical endothelial cells surrounded by lymphocytic infiltrate with erythrocytes extravasation. The vascular tumor can result from a number of conditions, including immunocompromised patients with AIDS, organ transplant, or classic or sporadic in older Eastern European males and Mediterranean’s, all ages widespread in Africa. The double stranded Human Gamma Herpes Virus 8 (HHV-8) is a typical association of KS, and HIV act as an independent trigger inciting lesion flares in a HHV-8 background. The mode of transmission of the virus is yet not well defined but is thought to be through saliva or vaginal secretions. According to a cross-section study in Albania HIV patients relating KS displays that advance form of the virus with low Lymphocytes CD 4 account <350/mm3 in men have significant result of 90% transmission HIV relating KS. Meanwhile, in Europe and North America statistics about HIV and KS has a significantly greater correlation of MSM and KS compared to Albania with 11%. The discordance is thought to be regarding misinformation reveled from patients due to stigma. Nevertheless, in general population poor data registration happens due to lack of HIV screening tests and not being made periodically precise diagnoses throughout early stages within the country. The skin lesions are very specific and appear simultaneously in different anatomical spots unlikely the other tumors.

During early phases them exhibit as a flat type of macule formed up to 1 cm, involving often oral mucosa, trunk, extremities, and on later in time or in severe decline immunity can evolve in larger protuberant nodules >1cm with different shape of red brown in appearance. Sometimes in Equatorial Africa immunocompetent men, the purple nodes evidently can grow in the lymph nodules comprising the drainage site leading to edema of the region obstructed. More aggressive course is in late stages in immunosuppressed HIV-AIDS that have a systemic spread especially involving broncho-pulmonary tree causing a severe dyspnea and hemoptysis in case of nodules bleeding. In transplanted children is observed blast of HHV-8 which causes visceral manifestation but sparing skin patches involvement. The gold standard confirmation of KS diagnose, is through anatomopathological appearance of micro-vasal proliferation with spindle-shaped cells of endothelial origin. Despite classic examination and clinic inspection, the immunohistochemistry staining referring that CD31 and CD34 antigen detection plays a major role in neovascularization of vascular endothelial cells in KS.

The standard therapy used for non-critical stage patients are Anti-retroviral for HIV to reduce the viral replication and to reach a satisfy CD4+ account until the regression of SK, positive feedback for 9 months. Assessment of an assertive illness especially mucosal and systemic pulmonary involvement the treatment of choice is chemotherapy, including doxorubicin used in Albania either, tubuline targeting drug paclitaxel, and vinblastine. For lumps appearing on the skin can be treated aesthetically by local cryotherapy. Apart of traditional protocol treatment with international references, a study was conducted in a clinic in Tirana with some herbal extracts of Allium sativum, Jugland regias and Laurus nobilis, used as topical therapy for KS patient. The results were meticulously step by step followed by physician, achieving promising outcomes. These plants mixed together have shown an anti-inflammatory, anti-bacterial, anti-platelet, and anti-vascular effect over different kind of cutaneous plaques and nodes. Both leading to dry lesions, crusts forming and at least succeeding in scar [6, 7, 8]. No recidivism was detected in our patient during 4 years in a row of continuous medical investigation.

A 73-year-old male patient presented to our clinic in January 2017 with some red-brown solid formations located on the elbows. He explained that they had started since last year as small solid red lesions under the skin that progressively grew up. During anamnesis, he said that he had had unprotected sexual activity with different partners. His physical examination showed widespread lymphadenopathy and oral candidiasis. The laboratory studies revealed a CD4 level of 270/mm3. Further studies detected HIV1 infection with a viral load of 150 000 copies/mm3. The histopathologic examination of the lesions revealed Kaposi Sarcoma. The patient refused taking antiretroviral therapy due to ART side effects. Subsequently, it was started immediate local therapy with our herbal solution of NILS. This treatment dried up completely the lesions converting them into crusts and then scars. 2-3 sessions were needed for the cure of each lesion. Since then, 12 such lesions have been treated with the same therapy, and none of them has had repetition at the exact location. Each lesion is healed within 3-4 weeks, depending on its size. However, new KS lesions have appeared in other body sites such as the arm, thigh, and foot in different periods of time. 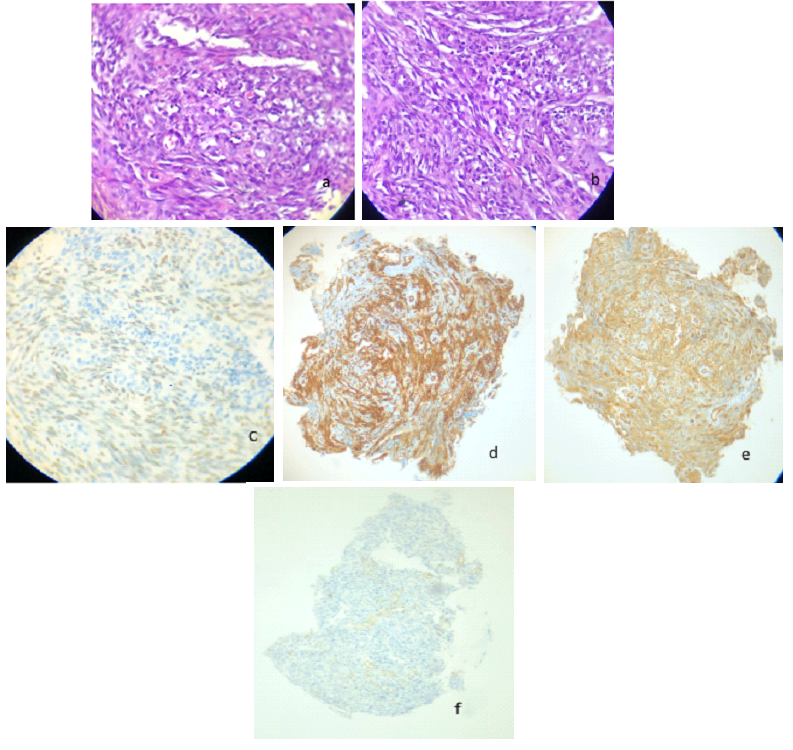 The patient presented in this case was treated for his lesions of Kaposi Sarcoma with a herbal solution of NILS. In a previous study conducted by Koka et al. NILS was used for the successful treatment of Basal Cell Carcinom and Squamous Cell Carcinoma after undergoing standard treatment with either surgery or radiotherapy or both. (1) The NILS treatment developed for medical treatment in Albania consists of Allium sativum (garlic), Jugland regias (English walnut) and Laurus nobilis (bay leaves). There is evidence for the antiviral and beneficial properties of these plants. In vitro, Allium sativum was proven to possess antiviral activity against viruses such as HSV-1 and -2, CMV and Influenza B virus. Clinically, Allium sativum was proven to have positive effects on various diseases, such as the common cold, diabetes, rheumatoid arthritis, hypercholesterolemia and hypertension. The caveat of the garlic plant lies in its antiplatelet properties and thus should not be used in conjunction with antiplatelet drugs, such as Warfarin etc. Currently a possible effect on cytochrome activity (CYP3A4) is being discussed. (2) Jugland regias is being used in alternative medicine for centuries. There is evidence that it has many therapeutic effects, some of them being antimicrobial, anticancer and antioxidant properties. (3) Laurus nobilis showed antibacterial and antifungal properties, as well, inhibiting microorganisms such as Staphylococcus aureus, Pseudomonas aeruginosa and Escherichia coli. (4) The successful treatment of the KS lesions in this patient case as well as the non-melanoma skin cancer (NMSC) in Koka et al.’s study showed a promising effect of this herbal solution as an alternative to the classic therapeutic methods such as surgery, radiation and even the injection of chemotherapeutic agents, such as vinblastine. (5) Benefits compared to the classical therapy are the lack of side effects from chemotherapy and radiation, in particular. Due to its natural components, NILS is a safe treatment option for patients at higher risk, such as pregnant women, immunocompromised and older patients. This non-invasive treatment is more convenient for the patient and makes it applicable outside the hospital. Outpatient would only be required to monitor the healing progress, not for applying the topic solution.

Due to the promising results for mucocutaneous lesions, NILS should be considered for other skin conditions, as well, such as HSV-1, -2, Lichen planus etc. In order to prove its effectiveness, it is recommended to conduct larger cohort studies with a NILS and placebo group. A long-term study would also be of interest, in order to see if patients such as the 73-year-old male with the KS lesions presented in this case study is experiencing late relapses of the lesions on the previously treated locations. This could be helpful to determine how long the beneficial effects of the NILS treatment last and how a long-term follow-up should be planned and executed. As in the case presented here, KS lesions did appear on the non-treated areas; studies on a preventive use of the unaffected areas could help determine if NILS can be used as prophylaxis in KS positive patients, transplant patients and HIV patients. Lastly, possible drug interactions need to be explored further, since Allium sativum has possible cytochromal effects and antiplatelet proeprties. In particular in the group of KS lesions in HIV patients it needs to be determined whether NILS could have possible drug interactions with the drugs of HIV therapy (HAART).