Krukenberg Tumor in A 22 Year Old Patient with Primary Tumor in the Transverse Colon. Clinical Case

Background: In 1896 Friedrik Krukenberg described a bilateral ovarian tumor, which he called "mucocellular ovarii fibrosarcoma" (carcinomatodes), considering it to be fibrosarcomatous in nature. Clinical Case: A 22-year-old female patient admitted to the emergency department of our hospital with grade IV anemic syndrome. Two weeks after his admission to the emergency room, he presented melenic evacuations accompanied by asthenia, adynamia, hyporexia and dyspnea. His vital signs were normal except for TA 100/60 mmHg. Their laboratories of admission showed a hemoglobin of 6.3 g rest within normal parameters; Guayaco (++). First Ultrasound reported thickening of the colon walls. His control blood biometry reported hemoglobin of 3.4 g being transfused with globular packages increasing to 12.8 g. Carcinoembryonic antigens reported CA 19.9, 315.27, 15.3 = 7.29. A panendoscopy and colonoscopy was performed, reporting ulcerated lesions in the transverse stenotic colon. It refers to a Regional Hospital of High Specialty to the service of oncology for its integral management. Discussion: Previously, any metastatic ovarian cancer was categorized as Krukenberg's tumor; however, Novak and Gray established new diagnostic criteria to eliminate this confusion. Therefore, a mucin-secreting carcinoma with ring-seal cells in an ovarian fibroblast stroma is a Krukenberg tumor. Most of these tumors are of gastric origin (76%). Colorectal cancers carry a poor 5-year survival prognosis of only 13.1%.

In 1896 Friedrik Krukenberg described a bilateral ovarian tumor, which he called "mucocellular ovarii fibrosarcoma" (carcinomatodes), considering it to be fibrosarcomatous in nature. In 1916 Stone drew attention to metastatic cancer emphasizing the possible routes of dissemination to the ovary. In 1917, special attention was paid to Krukenberg's tumors by finding another bilateral ovarian tumor in a 33-year-old patient with lymphatic involvement but without finding the primary tumor in the digestive tract. In 1918 Mayor described blood dissemination by finding tumor cells in the pulmonary circulation during autopsy. Krukenberg in his original report considered the ovarian tumor as primary. Major, with reference to the cases collected until 1918, was able to affirm that of 55 cases he could attach 8 more cases. In 18 cases they found a primary tumor of the digestive system [1].

A 22-year-old female, null, who enters the emergency department of our hospital with grade IV anemic syndrome. As background, he reported that 4 months ago he started with digestive disorders with intermittent diarrhea accompanied by pain in the right hypochondrium. Two weeks after his admission to the emergency room, he presented melenic evacuations accompanied by asthenia, adynamia, hyporexia and dyspnea. His vital signs were normal except for TA 100/60 mmHg. Their laboratories of admission showed a hemoglobin of 6.3 g rest within normal parameters, Guayaco (++). Ultrasound reported thickening of the colon walls. Her control Bh reported a hemoglobin of 3.4 being transfused with globular packets increasing to 12.8 g. Carcinoembryonic antigen reported CA 19.9, 315.27, 15.3 = 7.29. Panendoscopy was performed without significant findings. A colonoscopy was performed, reporting ulcerated lesions in the transverse stenotic colon. Figure 1. New ultrasound reported ovarian tumor (likely dysgerminoma) Figure 2 and 3. The CT scan reported complex cystic lesions in the pelvic cavity due to probable ovarian tube vs. abscesses. Epithelial neoplasia (cystadenocarcinoma or cystadenoma). The patient improves his hemodynamic status, ascites fluid sample is taken to search for tumor cells, resulting negative and refers to a Regional Hospital of High Specialty of the Peninsula of Yucatán for its integral management. Where she underwent surgery and is currently receiving adjuvant chemotherapy. 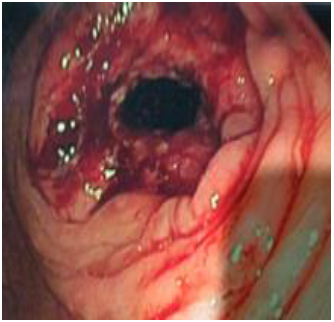 Figure 1: Ulcerated tumor in the transverse colon with proximal stenosis and stigmas of recent hemorrhage. 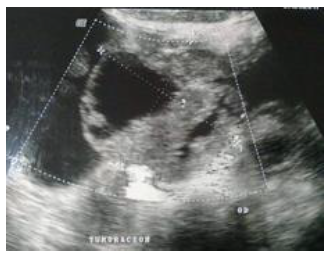 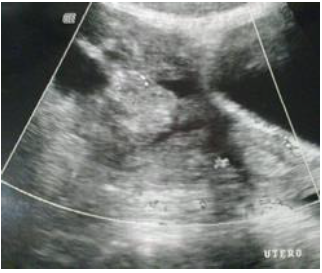 Currently the term Krukenberg tumor (TK) indicates only metastatic ovarian cancer originating from another primary tumor, but the WHO has established criteria to establish this diagnosis based on the involvement of stromal tissue with proliferating mucin-producing neoplastic seal ring cells Ovarian stromal sarcomatoid. When an ovarian tumor is detected, the initial question should be whether the tumor is primary or is metastatic. TKs are rare and account for only 1% to 2% of all ovarian tumors and their incidence is approximately 0.16 per 100,000 per year. The majority of cases occur between 20 and 60 years of age and are more common in premenopausal women [2]. Previously, any metastatic ovarian cancer was categorized as TK; However, Novak and Gray [3] established new diagnostic criteria to eliminate this confusion. Therefore, a mucin-secreting carcinoma with ring-seal cells in a fibroblast ovarian stroma is referred to as TK [4].

Most of the TK are gastric origin (76%), however, the primary one may be of intestine (colon) 11%, biliary system 3%, cecal appendix 3%, pancreas, urinary bladder, cervix, breast and renal pelvis. They can also be primary. About 80% are bilateral in our case. The presence of the tumor through imaging has a very poor prognosis with a survival range of 12 to 23.4%. Our case was presented as a severe hemorrhagic event of the colon and later ovarian tumors and mild ascites were found [5].

The time between diagnosis of the primary tumor to the development of metastasis to ovary is variable and can range from months to 10 years in our patient due to its debut as a severe hemorrhagic event precipitated the definitive diagnosis. Pre- and postoperative fluctuating levels of CA 125 levels can be used as markers for follow-up of these patients following complete tumor resection. Immunohistochemistry is a valuable resource for the differentiation of metastatic primary ovary tumors, hence the profile of cytokeratin CK 7 (+) and CK 20 (-) are in favor of primary ovarian tumor and vice versa [6].

Similarly, TK can mimic a mucinous ovarian cystadenoma at the beginning of an assessment of patients and immunohistochemical studies are indispensable to differentiate these tumors [7]. Regarding the treatment of these tumors, resective surgery still plays an important role, however, chemotherapy and cytoreduction are important adjuvants in the integral treatment of these patients, in our case the ascites fluid sample was negative for Tumor cells, which gives us hope that the dissemination was not very large at that time [8].

Colorectal cancers carry a poor 5-year survival prognosis of only 13.1% and treatments guided by the tumor profile suggest a benefit in cases of advanced stage cancers [9]. When comparing survival in TKs of gastric origin versus those of colonic origin, the latter have a better survival than the former [10]. Rodríguez-Wong U et al. Also reported a case similar to ours with a primary tumor in the transverse colon, although in an older woman with good results [11].

Similarly, a tumor that included the gastric body and the transverse colon may be present, with a surgically operated gastric perforation and subsequently followed by a bilateral ovarian tumor, completing the surgical treatment plus polychemotherapy [12].

This type of tumor is very rare and is the first reported in our hospital, its prognosis is bad and given the presentation characteristics and age of the patient, we expect a favorable outcome.