Laparoscopic Cholecystectomy for a giant Gallstone

Introduction: Cholelithiasis is very common, but giant gallstones - gallstones bigger than 5 cm in diameter, are very rare. It is very challenging to remove them laparoscopically, especially in emergency situations.

Discussion: Gallstone over 5 cm in diameter is very rare. Laparoscopic Cholecystectomy (LC) is very difficult for these cases, especially in the emergency situations. Laparoscopic cholecystectomy can, however, be safely performed in experienced hands. To the best of our knowledge, this is one of the biggest gallstones managed laparoscopically.

Conclusion: Although the presence of giant gallstones poses technical challenges, laparoscopic cholecystectomy can be safely performed in the experienced hands. However, if the anatomy cannot be delineated clearly, open surgery remains the safe option.

Gallstone disease is one of the commonest surgical problems with women being affected more common than men (1). Laparoscopy has become the gold standard for the treatment of symptomatic gallstones. Gallstones with a diameter of over 5 cm are very rare. Such cases are difficult for LC, especially in the emergency situations. We present a case of a 9 cm giant gallstone which was removed laparoscopically.

A 69-year-old diabetic, hypertensive female known to have WPW syndrome (status post ablation) with past history of DVT and CVA presented to the emergency with one-day history of upper abdominal pain associated with vomiting. There was no h/o fever. Clinical examination revealed a tender right hypochondrium with a positive Murphy’s sign. Laboratory tests revealed leukocytosis (21000) and high CRP (256). Ultrasound abdomen was suggestive of acute cholecystitis with a single large gallstone (Figure 1). Her present medications included Aspirin in addition to antihypertensives and antidiabetics. After cardiac evaluation, she was posted for emergency surgery. Laparoscopic cholecystectomy was performed and patient had an uneventful recovery.

Gallstone disease is one of the commonest surgical problems with women being affected more common than men [1]. Laparoscopy has become the gold standard for the treatment of symptomatic gallstones and can be performed in 96% of the cases. The rate of conversion from laparoscopic to open cholecystectomy is about 4–5% [2]. Gallstones with a diameter of over 5 cm are very rare. Such cases are difficult for LC, especially in the emergency situations. Some surgeons may consider a giant gallstone an indication for open surgery [3]. The risk of conversion is related to surgeon factors, patient factors, and possibly equipment factors [4]. We present a case of a 9 cm giant gallstone which was removed laparoscopically.

The operation was performed using 4 ports with standard port placement. Because of presence of a large gallstone, gallbladder could not be grasped in the usual fashion. Aspiration of about 10-20ml of thick bile allowed the fundus to be grasped and retracted towards the right shoulder. The very presence of a giant gallstone did not allow a clear view of Hepatocystic triangle. After some dissection in this area, it was decided to dissect the gallbladder off the liver bed retrogradely. The presence of edema helped in getting into the tissue planes relatively easily. During all the dissection, it was however difficult to grasp the gallbladder with laparoscopic instruments. The manipulation of gallbladder was carried out using opened jaws of a bowel grasper, the so called “Fan technique” [5]. Cystic duct and Cystic artery were clearly identified, clipped and cut. Gallbladder was retrieved in an enobag through the camera port. The camera port needed to be extended to retrieve the specimen (Figure 2). The patient had an uneventful recovery and was discharged on 3rd postoperative day. A 9 cm gallstone was found within this huge gallbladder (Figure 3). Singh Y el al have reported a successful retrieval of a 13cm gallstone laparoscopically [6]. Xu et al. reported the laparoscopic retrieval of a 9.5-cm gallstone [7], and Becerra et al. reported removal of a 16.8-cm long gallstone via classical cholecystectomy in the emergency setting [8]. From the literature to date, our gallstone appears to be one of the largest removed laparoscopically. Giant gallstones can pose difficulties in two different ways. First, larger stones can result in a thicker gallbladder wall secondary to inflammation. The thickness of the gallbladder wall has been shown to correlate with conversion to open surgery in bivariate analyses [9]. Second, a large gallstone can lead to technical difficulties, for example, grasping the gallbladder with laparoscopic instruments may be extremely difficult and also to gain appropriate anatomical exposure for safe dissection.

Although the presence of giant gallstones poses technical challenges, laparoscopy can be safely performed in experienced hands. However, if the anatomy cannot be delineated clearly, open surgery remains the safe option. 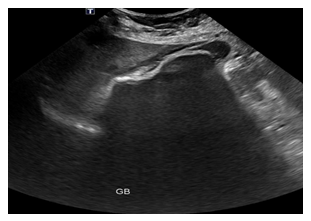 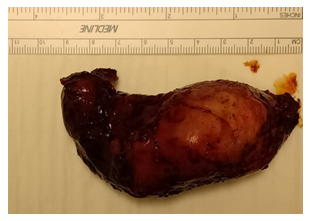 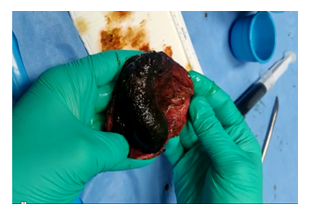 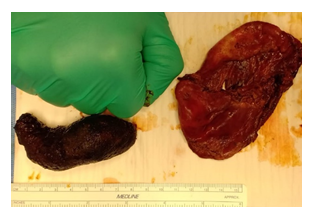