Cases of giant mucinous ovarian borderline tumors are rarely described in literature, with different clinical manifestations and difficult diagnostic assessment. In the present paper we report the case of a 60 years old woman with a giant mucinous borderline left ovarian tumor (>34 cm in maximum diameter) with 15.000 ml of free fluid inside. Laparotomic approach is usually preferred in these cases, but it exposes patients to higher rate of complications. We demonstrate that laparoscopy is safe and effective in managing large adnexal masses more than 30 cm in diameter.

Giant ovarian cysts (GOCs) are rarely described nowadays because of the improvement in diagnosis and minimally invasive surgical techniques, that allow to detect and resect them at an earlier stage. Benign cystadenoma accounts for approximately 75% of all histotypes of GOCs, mucinous cystadenomas are encountered in 25% of cases [1]. Cases of giant mucinous ovarian borderline tumors are rarely described in literature, with different clinical manifestations [2, 3] and difficult diagnostic assessment. Very few cases of GOCs, that present masquerading as ascites, have been reported [4, 5]. Management of ovarian cysts is related to the patient’s age, the size of the cyst, and its histopathological nature [6]. Operative risk is extremely high: inferior vena cava (IVC) syndrome, bleeding, severe hypotension, cardiac failure, respiratory problems, intestinal distension and abdominal competence are the major complications. Some authors apply fluid aspiration before or during resection, in order to minimize operative time and risk due to sudden changes of intra-abdominal pressure, but an incorrect fluid aspiration may cause intraperitoneal dissemination, if a cancer occurs.

Laparotomic approach is usually reserved to GOCs, but it exposes patients to higher rate of complications, including serous fluid pooling and abscess formation between the folded muscles, sometimes requiring abdominoplasty. In these cases, abdominal wall necrosis are also reported [7]. Laparoscopic approach is used to remove small ovarian cyst but nowadays its role is expanding also in managing safely and effectively large benign adnexal masses more than 10 cm [8, 9]. We present a case of a rare giant mucinous ovarian borderline tumor, with no relevant clinical manifestations and negative markers assessment, with a mass of over 15.000 g removed by laparoscopy.

A 60-year-old married woman was referred to our Department because of mild abdominal pain in previously detected ovarian cyst with negative tumor markers. The last clinical gynaecological examination was released in 2005. No significant drug and family history was revealed, during anamnesis. The woman claimed gradual distension of the abdomen in the last 14 years, but with no constipation or other relevant complaints. The patient presented a mass growth, enlarging the abdomen (Figure 1), without signs of cardiocirculatory failure, nor peripheral oedema. She referred occasionally cough with no breathing alterations, likely related to tobacco smoke habit. 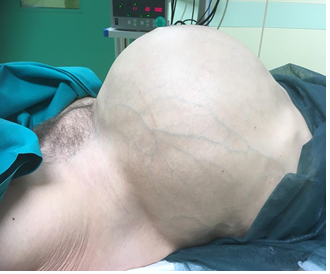 An ultrasound scan revealed a giant (>40 cm in diameter) cystic mass in the abdomen, with a hypoechogenic pattern. From her personal and familial history no serious diseases or cancer history was reported. The patient was referred for abdominal computed tomography (CT) scan revealing no ascites, a normal liver, spleen, pancreas, kidney, and gastrointestinal tract, no vascular involvement, and a giant cystic mass (>34 cm in maximum diameter) without septa and filled with fluid (Figure 2). 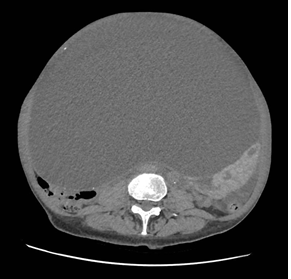 A solid component of 90 × 34 mm was detected in the posterior cystic wall without invasion. No signs of infiltrative growth of the mass were observed. Pressure phenomena of the colon appeared. Blood test and tumor markers (CA-125, CEA, alpha-fetoprotein and Ca 19-9) were at normal levels. According to the high complication rate in the laparotomic approach to GOCs, and the low risk of malignancy in the pre-operative evaluation, we decided to perform a laparoscopic excision of the mass. Before starting the laparoscopy, we retained correct to drain the cystic fluid, in order to reduce the high wall tension, permitting trocars insertions. In order to minimize the oncological risk of intraperitoneal dissemination, a sovrapubic minilaparotomic access was adopted to insert in the cystic wall a Menghini’s needle for the fluid aspiration without peritoneal leakage (Figure 3). 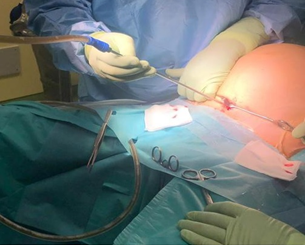 Figure 3: Cystic fluid drainage. Through mini-laparotomic sovrapubic access the insertion of the Menghini’s needle in the cystic wall permits the fluid aspiration without peritoneal leakage.

A total of 15,000 ml of yellow serous fluid was evacuated at a slow flow rate (800 ml / min). After the fluid evacuation, the site of needle insertion was sutured with Vicryl 0 in order to avoid intraperitoneal dissemination. After ovarian cyst’s decompression, entry into the peritoneal cavity was done using the Hasson technique. The 10mm trocar was placed through the umbilical incision. The abdominal cavity was visualized with huge cysts arising from the left ovary, totally involved into the cyst, extending up to the level of the xiphoid process. The 10 mm second trocar was applied sovrapubically through the previous minilaparotomic access. Two 5 mm trocars were bilaterally inserted in the lower abdominal quadrants. Peritoneal wash was sent for cytology. 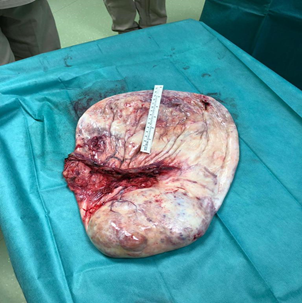 Figure 4: Giant cystic mass with smooth external surface. On dissection, the lesion appears as a single cystic space filled with thick mucus and a solid component in the inferior pole.

Right ovary excision was performed using the same technique. No hemodinamic and cardiac intraoperative modifications occurred. Operating time was 140 min. There was no relevant early or late complications after surgery. The patient was discharged on second postoperative day. The patient was well 6 months after surgery. The pathological examination revealed a giant cystic mass with smooth external surface. On dissection, the lesion appeared as a single cystic space filled with thick mucus. The right ovary and the fallopian tubes were normal. Examination was performed with at least one section/cm revealing a mucinous neoplasia of borderline malignancy (AJCC/TNM: pT1a stage). No signs of infiltrative growth of the tumor, intraepithelial carcinoma or stromal micro invasion was detected. The peritoneal wash and the endocystic fluid were both negative for neoplastic cells.

Borderline mucinous ovarian tumor is a rare disease presenting as a large cystic mass containing sticky gelatinous fluid. This peculiarity makes difficult the differential diagnosis with mucous ovarian cystoadenomas, particularly in giant mass. The availability of modern advanced devices and expertise in minimally invasive surgery, renders the laparoscopic approach to the giant ovarian mass to be preferred. The good postoperative cosmetic approach of laparotomical excision of giant ovarian mass is very difficult to be achieved, considering the extent of the abdominal wall incision [10]. In this cases, after tumor excision, an abdominal wall reconstruction might be necessary because of the laxity and redundancy of the skin, with high risk of dehiscence, abscess, and postoperative complications.

Even in literature still appears that laparoscopy has a limited role in treating giant ovarian mass, our opinion is that laparoscopic approach by a skilled surgeon in a modern and developed environment represents the first line treatment. As presented in this paper, the risk of cystic rupture and intra-abdominal cystic fluid dissemination may be minimized using a slow-flow vacuum aspiration, permitting the consequent safe trocar insertion. Laparoscopic approach is minimally invasive, permits better cosmesis and shorter hospitalization. By now, there are no guidelines or consensus in the literature regarding the maximal size of ovarian cyst which may be managed by laparoscopy. Our case demonstrates that laparoscopy is feasible in ovarian mass more that 30cm in maximum diameter with pre-operative accurate cystic fluid drainage.

The author declares that he has no conflict of interest.