Background: Maternal cardiac arrest is rare, with reported incidence of 1:12,000. Ganglioneuroma is a very rare benign tumor, commonly originating in the posterior mediastinum. Here we present a case of cardiac arrest during cesarean delivery, secondary to major vessel compression by a large mediastinal Ganglioneuroma which was unknown before delivery.

Case Report: A healthy, nulliparous, 22 year old woman, admitted for urgent cesarean section at 40-weeks gestation under epidural anesthesia due to fetal decelerations and meconium. Shortly after extraction of the fetus, severe hypoxemia and cardiac arrest ensued. Return of spontaneous circulation was accomplished 5 minutes after initiation of cardiopulmonary resuscitation. The patient recovered fully. Imaging revealed large space-occupying lesion of the posterior mediastinum with left lung and pulmonary artery compression with resultant segmental pulmonary embolism. Biopsy did support diagnosis of lymphoma. Left thoracotomy was performed with complete excision of the tumor. Biopsy revealed Ganglioneuroma, and no further therapy was required.

Conclusion: To the best of our knowledge, this is the first case report describing maternal cardiac arrest due to undiagnosed large mediastinal Ganglioneuroma. Careful history, along with prompt imaging, tissue biopsy and definitive surgery are necessary to avoid further morbidity and possible mortality.

Ganglioneuromas are very rare benign tumors. The reported incidence is1:1,000,000, with female predominance [1, 2]. They originate in neural crest cells, including Schwann cells, ganglion cells or fibrous tissue [3]. They are most often described in children, adolescents and young adults, with median age at diagnosis of 7 years [4]. Ganglioneuromas are usually slow-growing and asymptomatic; often appearing as an incidental finding in imaging. Clinical manifestations may appear secondary to mass effect, such as scoliosis [5] or compression of the spinal cord, gastric or major vessels. They commonly occur in the posterior mediastinum (42%), retroperitoneum (37%) and adrenal glands (21%) [6]. Ganglioneuroma appears as an encapsulated mass that is enhanced slightly by contrast medium [6]. Histopathologic examination is essential to confirm the diagnosis and to differentiate it from other neural crest tumors [6]. Histopathology will show Schwann and ganglion cells along with fibrous tissue.

Usually, no treatment is needed. However, in cases of significant mass effect, surgery is required. Prognosis is usually very good, without recurrence and without need for further therapy [7]. Here, we present a rare case of a large posterior mediastinal ganglioneuroma in a young pregnant woman, which was diagnosed due to cardiac arrest during urgent cesarean section, secondary to compression of major vessels.

A healthy, nulliparous, 22 year old woman was admitted to the delivery unit with contractions and bloody vaginal secretions at 40 weeks’ gestation. Pregnancy was spontaneous with normal course. She was alert, hemodynamically stable without respiratory distress. She received epidural analgesia and induction of labor with oxytocin. Later in the course of delivery, amniotomy was performed due to poor progress, with good results and cervical os dilation of 4 cm. Due to fetal decelerations and meconium, the parturient was transferred to the operating room for urgent cesarean section. The surgery was performed under epidural anesthesia.

Shortly after extraction of the fetus, the parturient complained of fatigue, thirst and shortness of breath. She became hypoxemic and saturation dropped to 50%. Bradycardia ensued with asystole and cardiac arrest. Cardiopulmonary resuscitation was started immediately, with chest compressions, ventilation via face mask and bag and intravenous epinephrine. She was intubated and ventilated. No significant intra-operative bleeding was observed, and she did not require any blood products. Lung auscultation was normal. Jugular vein distension was not observed. Return of spontaneous circulation was noted after 5 minutes, with sinus tachycardia 120 beats per minute, blood pressure 120/75 and saturation 99%. At this stage, due to uterine atony, the parturient received oxytocin and misoprostol, with good response. Arterial blood gas sample showed mild metabolic acidosis with pH 7.23, bicarbonate level 20 mmol/L, lactate level 3.2 mmol/L, PO2 165 mmHg, and PCO2 45 mmHg. Electrolyte and glucose levels, coagulation profile and blood count were normal. Chest x-ray revealed a large space-occupying lesion in the left upper lobe (Figure 1).

After stabilization, uterine suture and closure of the abdomen, she was transferred to the intensive care unit, still intubated and ventilated. Echocardiography showed normal contractions of the left and right ventricles without significant valvulopathy or pericardial effusion. Electrocardiography was normal without evidence of acute ischemia or right ventricular strain. Chest computed tomography showed a large space-occupying lesion in the left posterior mediastinum, measuring 62 × 90 × 94 mm, minimal left pleural effusion and left lower lobe sub-segmental pulmonary embolism (Figure 2 and 3). Upon cessation of sedation, the patient regained full consciousness and was alert and oriented. She was extubated successfully and full anticoagulation with enoxaparin was initiated. The patient had normal blood oxygenation, was hemodynamically stable, had good urine output and normal renal function. Anamnesis revealed cough and wheezing for the past two years, with bronchodilator therapy, but no chest x-ray or other imaging had been performed. She also reported orthopnea during the past 2 years, with dyspnea in the supine position, without further evaluation.

The patient underwent ultrasound-guided biopsy of the lesion. No hematopoietic cells were observed, and initial specimen results did not match a diagnosis of lymphoma. Left thoracotomy was performed with complete excision of the lesion. Histopathology revealed Schwan cells admixed with mature ganglion cells, compatible with ganglioneuroma. The patient was successfully extubated post-operatively, was hemodynamically stable, and was discharged to the cardio-thoracic 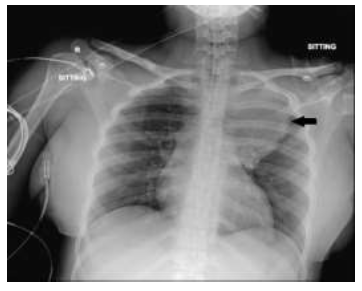 Figure 1: Chest X-ray showing a shadow of the left mediastinum. 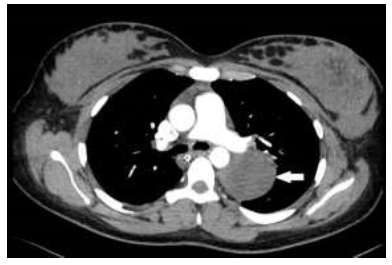 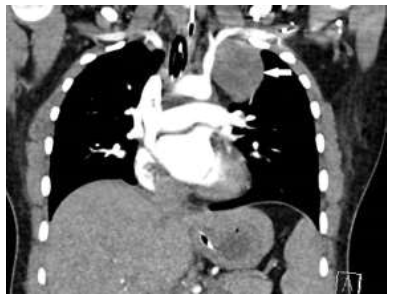 Here we present a case of cardiac arrest during cesarean delivery, secondary to major vessel compression by a large mediastinal mass that was unknown prior to delivery. During pregnancy, the patient was asymptomatic, even though after a more detailed anamnesis, symptoms of orthopnea and wheezing had existed for two years. Due to left lung and left pulmonary artery compression, supine position, abdominal retraction during surgery, and perhaps the addition of epidural analgesia, severe hypoxemia ensued, followed by cardiac arrest. Cardiopulmonary resuscitation and endotracheal intubation resulted in successful return of spontaneous circulation after 4-5 minutes, avoiding potential disastrous neurologic complications.

Mediastinal masses during pregnancy are rare. They are usually located in the anterior mediastinum, with signs and symptoms of cough, wheezing, dyspnea, orthopnea, superior vena cava syndrome and chest pain [11]. The most common cause of mediastinal masses in pregnancy is Hodgkin's lymphoma [12]. Cesarean section for such patients poses a risk for cardiopulmonary collapse due to compression of the tracheobronchial tree or of the great vessels [13]. In our case, the mass originated in the posterior mediastinum, but due to its large dimensions, it had considerable mass effect, including pulmonary artery compression, causing pulmonary embolism at the same region. In our opinion, the pulmonary embolism was not the cause of cardiac arrest, since it was only segmental, but compression of the tumor was significant enough to cause that sequlea.

It was essential to accomplish rapid histopathological diagnosis, to provide appropriate and prompt treatment. Two days following cesarean delivery the patient underwent ultrasound-guided biopsy, which ruled out lymphoma. The patient underwent thoracotomy the following day, with complete excision of the tumor. Histopathology revealed ganglioneuroma. To the best of our knowledge, this is the first case report describing maternal cardiac arrest due to undiagnosed large mediastinal ganglioneuroma. Careful history, along with prompt imaging, tissue biopsy and definitive surgery are necessary to avoid further morbidity and possible mortality.