A 67-year-old man with newly diagnosed posterior mitral leaflet flail and atrial fibrillation was given dabigatran for stroke prevention upon admission. Within 12 hours of taking two doses of 110 mg dabigatran, the patient suffered from severe pulmonary hemorrhage, acute respiratory failure, and cardiogenic shock. He was rescued by a single dose of 5 g idarucizumab in addition to extracorporeal membrane oxygenation (ECMO) support. The patient recovered to stable hemodynamic status then successfully underwent surgical intervention for mitral valve repair. He was discharged 2 weeks after surgery.

Dabigatran is an effective non-Vitamin K antagonist oral anticoagulant (NOAC) that is used for prevention of stroke and systemic embolism in patients with non-valvular atrial fibrillation (NVAF). However, in trials and serial case reports, dabigatran has been associated with major bleeding events, including intracerebral hemorrhage, retroperitoneal bleeding and massive gastrointestinal bleeding. Currently, such major and life-threatening bleeding events are treated with idarucizumab, a high affinity and high specificity agent that to binds dabigatran, and rapidly reverses its anticoagulant activity.

The patient’s CHA?DS?-VASc score was 2 points (age 67, hypertension). He received 100 mg aspirin and 0.125 mg digoxin on the day of admission. One the same day, 110 mg dabigatran (Pradaxa) was given at 18:00. In the morning of following day, aspirin was discontinued, and second dose of 110 mg dabigatran was given at 09:00. He suffered from cough with blood-tinged sputum (Figure 2) after 30 minutes later after receiving second dose dabigatran.

Following intubation, the patient was transferred to a coronary care unit, where 5 g idarucizumab (Praxbind) was given intravenously. His condition quickly progressed to cardiogenic shock despite administration of a vasopressor and fluid resuscitation. Veno-Arterial (VA-) mode ECMO was applied. By that time, pulmonary hemorrhage was ceased, and the chest X-ray had also improved. The patient received robotic-assisted mitral valve repair with neo-chordae creation and annuloplasty for flail of posterior mitral leaflet one week later. After surgical intervention, his cardiac and pulmonary functions both improved. The patient was successfully weaned off ECMO and he was extubated one week after the operation with stable hemodynamic status (Figure 4). 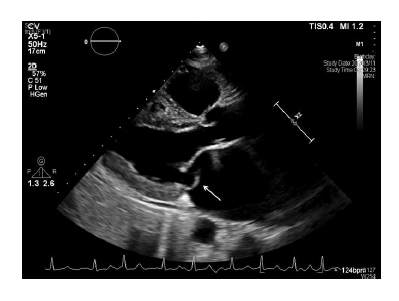 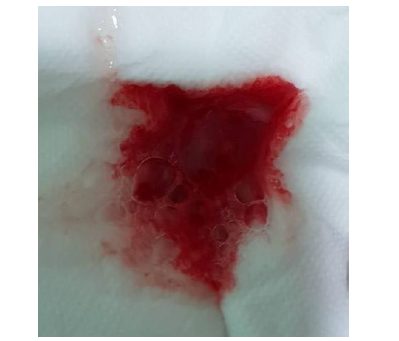 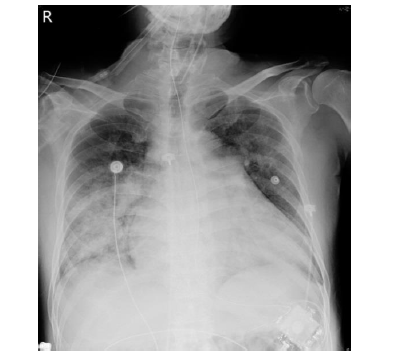 NOACs are currently prescribed worldwide to prevent stroke in patients with NVAF at the expense of increased risk of bleeding. The CHA?DS?-VASc and HAS-BLED scores are used to respectively evaluate the risks of stroke and NOAC-related bleeding; a higher HAS-BLED score indicates risk of NOAC-related bleeding. Previous randomize studies revealed the rate of dabigatran-associated major bleeding was 2.71% per year in patients receiving 110 mg and 3.11% per year in those receiving 150 mg [1, 2]. According to its pharmacokinetic profile, dabigatran exhibits a peak plasma concentration (Cmax) 1.5 to2 hr after oral administration, which means bleeding is most likely to occur approximately two hours after taking the medication [3]. Current data supports several risk factors for bleeding after NOAC administration, including renal insufficiency, concomitant use of P-glycoprotein inhibitors (e.g., verapamil or diltiazem) and extreme body weight [4, 5]. Although a reduced dose of dabigatran (75 mg orally twice daily) is only recommend for patients with CrCl of 15 to 30 mL/min, dabigatran-receiving patients with CrCl <50 mL/min have a more than two-fold increased risk of major bleeding compared to those with CrCl ≥80 mL/min [6]. Since our patient has a HAS-BLED score of only 1 point (> 65 years of age), the specific factor likely to have predisposed him to bleeding was moderate renal impairment. Also, it is possible that receiving one dose of aspirin might have contributed to the development of hemorrhage [7].

To our knowledge, there has been no randomized trial or case report discussing the time interval between starting NOAC treatment and incidence of life-threatening major bleeding or severe pulmonary hemorrhage. Our patient developed massive pulmonary hemorrhage and cardiogenic shock only 15 hours after taking the first of two low doses of dabigatran. His condition deteriorated rapidly and required ECMO as a live-saving measure. In such emergent situations, the reversal agent is a crucial component of the treatment. Idarucizumab is able to quickly alleviate bleeding if the patient develops life-threatening bleeding required urgent intervention [8]. In the RE-VERSE AD study, a single 5 g dose of idarucizumab was effective to abolish dabigatran activity in 98% of patients, and this effect was maintained for 24 hours in most patients. Among patients with overt bleeding that could be evaluated in the first 24 hours, the median time to the cessation of bleeding was 2.5 hours [9]. Thus, the benefit of early intervention with idarucizumab when a patient only shows mild clinical manifestations remains unknown. As a result of this major bleeding event, NOACs were discontinued in our patient. Instead, he underwent heart surgery and may benefit from left atrial appendage (LAA) occluders or primary LAA suture [10].

Our patient with low bleeding risk was placed on NOAC therapy for stroke prevention. However, a potentially lethal major bleeding event occurred rapidly after treatment with only two low doses of dabigatran. Use of ECMO was required for life salvage, and in this emergent condition, it was essential to reverse drug activity prior to performing an invasive procedure to correct the underlying condition.