Mononucleose-Like Syndrome in a Patient with Psoriatic Arthritis

Mononucleosis-like syndrome can be caused by cytomegalovirus. Usually occurs with fever, myalgias, pharyngitis, cervical adenopathy and general malaise. Respiratory symptoms are rare. Immunocompromised patients, including those treated with immunosuppressive drugs have increased clinical severity with greater complications, which are cause of morbidity and mortality. The authors present a man with psoriatic arthritis treated with weekly injectable methotrexate that came to the emergency department and was diagnosed of a cytomegalovirus mononucleosis-like syndrome complicated by respiratory symptoms and splenic stroke. Anti-viral treatment should be performed in immunocompromised patients and clinical surveillance should be maintained because of the high risk of infection reactivation.

Mononucleosis Infection is often caused by the Epstein-Barr virus, but other viruses can trigger a mononucleosis-like syndrome, like cytomegalovirus (CMV) and other herpes viruses1. CMV causes about 7 to 27.5% of mononucleosis-like syndromes [1]. This infection is more frequent in young adults and transmitted sexually or through contact with secretions [2]. Usually the manifestations include fever, myalgias, pharyngitis, cervical adenopathy and generalized malaise with intense asthenia [1-2]. They often have hepatosplenomegaly. Splenic infarctions are very rare complications, usually manifested by pain in the upper left quadrant [3]. Respiratory symptoms such as cough, dyspnea, respiratory insufficiency or pneumonia rarely occur [4-5].

Usually the infections caused by these viruses are self-limited and no treatment beyond the support treatment is necessary. After infection, the virus remains latent in monocytes, T lymphocytes and endothelial cells. Immunocompetent patients rarely experience complications [2]. In immunocompromised patients, which include patients with rheumatologic diseases under immunosuppression, the clinic may be more severe and complications may appear, being these one of great morbimortality [2, 6]. Regarding treatment, valganciclovir should be initiated in patients with CMV organ infection (pneumonitis, gastritis, esophagitis or colitis) and ganciclovir is reserved for more severe conditions [2].

The authors present a 44-year-old man, whose comorbidities included psoriatic arthritis, stage I obesity (BMI 34.2 kg/m2), and hypertension. In the outpatient clinic he was treated with losartan 100 mg id, methotrexate injectable 20 mg/0.4 ml weekly, betamethasone and calcipotriol, 0.5 mg/g + 0.05 mg/g topical. He was a former smoker for 15 years with a previous smoking load of 20 UMA and with daily alcohol consumption of about 0.3 L of red wine per meal and consumption of 2 to 3 beers.

The construction worker and resident in rural areas, with no contact with domestic or farm animals and no consumption of teas, fresh cheeses or herbal products and he consumed bottled water. He denied sexual contacts of risk and drug use. He denied cohabitants with the same symptoms. He had two healthy young adult children. He came to the emergency department (ED) for high fever with no typical pattern, paracetamol resistant and maximum of 38.5ºC. He presented dyspnea and productive cough with mucosal expiration. He referred intermittent epigastric and moderate intensity chest pain with pleuritic pain in the left hemithorax and easy fatigue with 15 days of evolution. Notion of 10 kilograms weight loss without knowing specify the time. No urinary or gastrointestinal symptoms. Three days ago he was in the same ED with dyspnoea and easy fatigue and was medicated with levofloxacin. 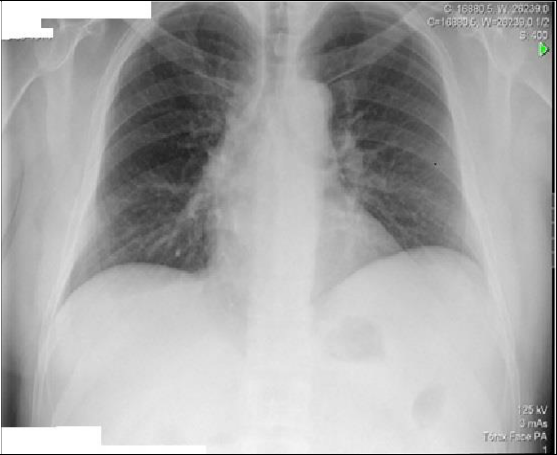 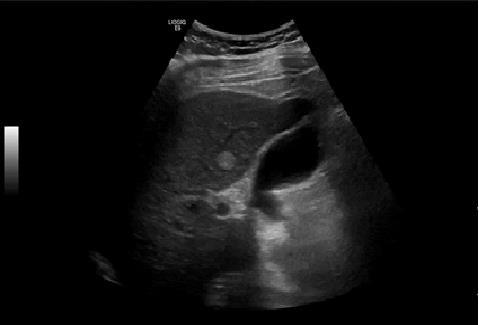 Admitted viral or atypical respiratory infection and was medicated with ceftriaxone 2 g once daily and azithromycin 500 mg once daily both intravenously. In the first days of hospitalization, he presented high fever (38.3ºC every 4 hours) with poor response to antipyretic drugs. He maintained dyspnea and easy tiredness. Infectious serologies were positive for CMV and Ebstein-Barr Virus (EBV) at day 4. Requested viral loads and initiated therapy with 900 mg of oral valganciclovir 12/12 hours. After 48 hours of initiation of therapy, the patient was afebrile and with general improvement. On the 7th day, were observed cervical adenopathies, odynophagia with tonsillar plaques and persistent productive cough, later irritative, which improved with antihistamines. During the stay hemoglobin decreased, with increased LDH and consumption of haptoglobin with the exclusion of autoimmune hemolytic anemia. Patient presented bilateral and symmetric of the lower limbs with godet and was excluded nephrotic syndrome, being these edemas related with hypoalbuminemia.

Persistent complaints of abdominal pain and sensation of increased abdominal perimeter. Exacerbated by feeding and rest, especially at left lateral decubitus. An echogenic reevaluation (Figure 3) show a triangular image, anechogenic (16x19 mm), that could correspond to peripancreatic fluid or adenopathy, near the head of the pancreas. The spleen had 18.2 cm and two areas up to the capsule, compatible with splenic infarctions. 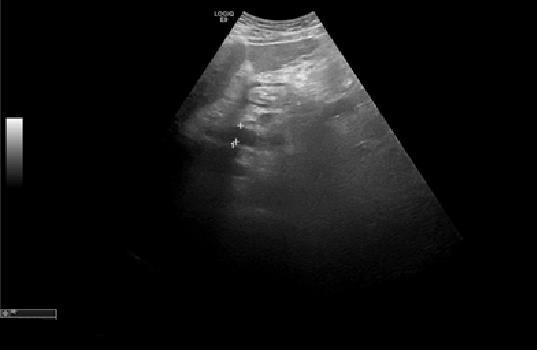 Figure 3: Reevaluation by abdominal ultrasound with a triangular image, anechogenic (16x19mm), which may correspond to a peripancreatic fluid or adenopathy. Splenomegaly of 18.2 cm and two distant areas with infarcts.

Initiated therapeutic dose of enoxaparin 1 mg/kg/day of 12/12 hours. Request a study of molecular thrombophilia, which no revealed alterations. Because of abdominal pain with nocturnal exacerbation, abdominal CT was requested (Figure 4), which demonstrated multiple areas compatible with infarction and angio-CT of abdomen that identifies adenomegaly (31x15mm) in the body-head transition of the pancreas. He maintained analgesia. 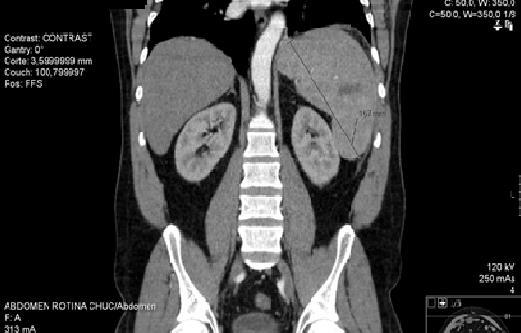 After obtaining the viral load of CMV (539618 logocopys), it was decided to aggressively treat the infection by changing the antiviral to intravenous ganciclovir 5 mg/kg (500 mg) of 12/12 hours. The viral load for EBV was negative. During hospitalization was staged liver disease. Upper digestive endoscopy with incipient varices and fibroscan with grade 4 fibrosis with elasticity of 29.5kpa. After 15 days of intravenous ganciclovir, requested a new viral load that was less than 250. He was discharged with valganciclovir oral 900 mg of 12/12 hours and maintained anticoagulation with rivaroxaban by splenic infarctions.

Reassessed in outpatient clinic 15 days after discharge, he complains about knees and hands inflammatory pain and edema. He was tired, but without increased of abdominal or pain, without alterations in objective examination. The viral load was negative. Discussed with infectiology and decreased the dose of valganciclovir to 900 milligrams oral once daily and increased analgesia.

Reevaluation with improvement of pain complaints under analgesia, with no alterations to the objective examination and new negative viral load. Anti-viral therapy was discontinued but anticoagulation was maintained. Ultrasound reassessment with 14 cm splenomegaly. Study of functional thrombophilia at 12 weeks negative. After 6 months suspended anticoagulation. In the following tables (Table 1 and 2), we present the analytic evolution during hospitalization and post-discharge. The evolution of viral load in the present in the table 2. 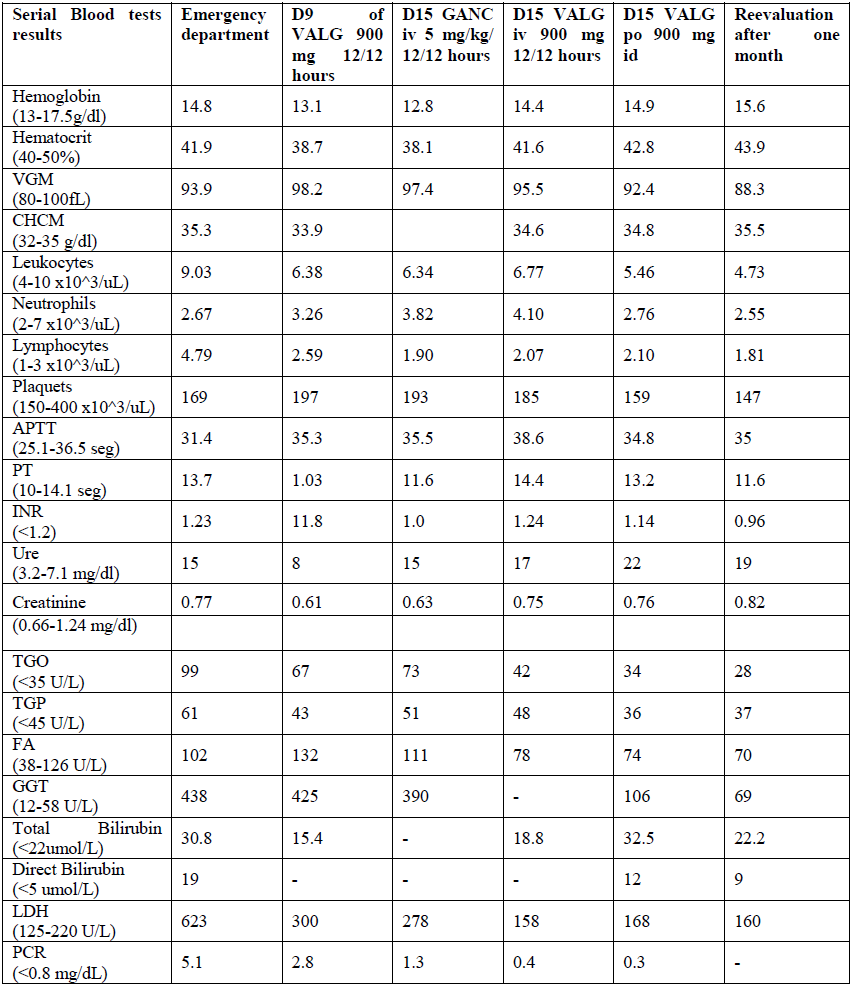 Table 2: The evolution of viral load.

Mononucleosis-like syndrome by CMV may occur in immunocompromised by immunosuppressive patients with chronic rheumatic diseases therapy. In these, there is a high risk of CMV infection, which is associated with a mortality rate of 20-75%, and the higher the immunosuppressive drug dose the greater the risk of CMV infection or reactivation [2, 6, 8]. Studies that relate the risk of CMV infection to immunosuppression have started in patients treated with cyclosporine alone or in association with methotrexate after bone marrow transplantation [9]. Although the particular risk of infection in patients receiving TNF antagonists such as infliximab alone or in combination with methotrexate has not been proven, there are many of CMV infections described in literature in patients undergoing this therapy [10]. Similarly, there are a number of reported cases of CMV secondary pneumonitis in patients undergoing corticosteroid therapy with methotrexate, and there appears to be a link between methotrexate and CMV pneumonitis. The patient presented by the authors was medicated with methotrexate for psoriatic arthritis. This is an antimetabolic drug used in neoplastic diseases treatment, rheumatologic diseases and as post-transplant immunosuppressant [2, 8, 11]. Its mechanism is based on the inhibition of DNA synthesis and T cell reproduction and, secondarily, the reduction of proinflammatory cytokines, gamma interferon, tumor necrosis factor alpha and interleukin12. Patients receiving methotrexate are at risk of developing opportunistic infections, and several cases are described of the CMV infection in patients treated with methotrexate, corticoids or other immunosuppressants [12]. After diagnosis of the infection there is no evidence of discontinuation or maintenance of immunosuppressive therapy, however it suspension may trigger a considerable improvement of the patient [1, 2, 7]. Nevertheless, therapy should be maintained if the underlying disease so requires. In our patient the methotrexate therapy was discontinued and initial treatment was with valganciclovir oral 900 mg 12/12 hours which is the recommended dose for an immunocompromised patient with CMV infection.

Complication develop such as splenic infarction was the justification for the anti-viral change to intravenous ganciclovir. In the literature, there are reported cases of splenic infarction and pulmonary thromboembolism in patients with rheumatoid arthritis under low doses of methotrexate and active CMV infection [13]. The association of CMV infection with splenic infarction was 12.4% in recent meta-analyzes [13]. The etiology, although not fully disclosed, is related to the increase in arterial blood demand and the increase in cellularity during the course of infection, activation of Factor X, increase of circulating Factor VIII and production of antiphospholipid antibodies [3, 13]. The treatment of splenic infarction is the treatment of viral infection and anticoagulation, and there is no consensus on the choice of anticoagulant [13]. In our patient and similar to several cases described in the literature we chose the rivaroxaban.

After the treatment, viral load must be known for therapy discontinuation. Today is known that CMV antigen dosing (pp65) may be a better marker than viral loads but this method is not yet available [1]. In these patients the prescription of secondary prophylaxis is not indicated, but clinical and virologic surveillance are extremely important [2].