A 52 year old female presented with difficulty in swallowing initially with solid then progresses to semisolid food since 2 months. The patient also complained of regurgitation of food and difficulty in breathing from the last 1-2 months. There was no previous medical history. Upper gastrointestinal endoscopic examination showed ulceroproliferative growth 12cm in length extending just proximal to gastroesophageal junction. The esophageal biopsy was received in the department of pathology and was diagnosed with small cell undifferentiated carcinoma. On IHC, cytokeratin, CD56 and chromogranin were positive and p63 and synaptophysin was negative. The final diagnosis of neuroendocrine carcinoma of oesophagus was given (Figure 1). 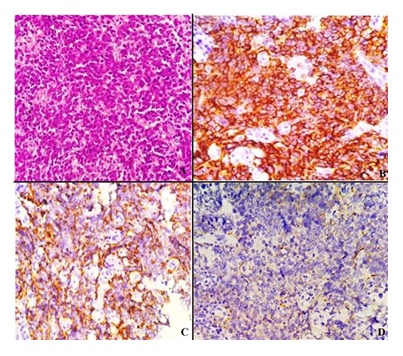 A 66 year old smoker male presented with dysphagia (grade 3) and weight loss. There was no previous medical history. Upper gastrointestinal endoscopy revealed circumferential narrowing at 33-37cm with superficial ulceration. On biopsy, a diagnosis of poorly differentiated carcinoma possibly squamous cell type was rendered. Seven cycles of neoadjuvant chemotherapy (docetaxel, cisplatin, fluorouracil) were given, but the patient didn’t respond. A repeat esophageal biopsy was done and received in the department for further evaluation. The diagnosis of small cell undifferentiated carcinoma. On immunohistochemical staining, cytokeratin, CD56 and chromogranin and synaptophysin were positive and p63 was negative. The final diagnosis of neuroendocrine carcinoma of oesophagus was made (Figure 2). 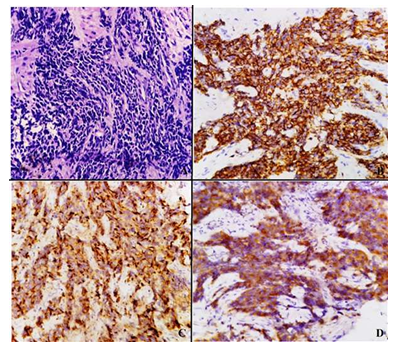 A 54 year old smoker male presented with difficulty in swallowing since 3 months with no previous medical history. Upper gastrointestinal endoscopy revealed ulceroproliferative growth at the mid thoracic esophagus. On biopsy, a diagnosis of poorly differentiated carcinoma, possibly squamous cell type was given. On immunohistochemical staining, CD56 and chromogranin were positive. The final diagnosis of neuroendocrine carcinoma of oesophagus was made (Figure 3).

A 58 years male presented with dysphagia since 1 months. An ulceroproliferative growth was identified at the lower thoracic esophagus on upper gastrointestinal endoscopic examination. On biopsy, a diagnosis of neuroendocrine carcinoma of esophagus with synaptophysin and CD 56 positivity.

NEC was formerly regarded as small cell carcinoma and it was reported by McKeown in 1952 as small cell carcinoma of the esophagus. The incidence of NEC ranges from 0.4% to 2% in all malignancies of the esophagus [1]. The origin of this tumor remains unknown. Some authors reported that NEC originates from Kulchisky cells in the esophageal epithelium, which are amine precursor uptake and decarboxylation (APUD) cells. While, other authors reported that esophageal NECs originate from pluripotent stem cells [2]. The sites of origin of NECs vary depending on race. As most of the Chinese and Korean authors reported that NECs were present in the middle of the esophagus, whereas American authors revealed that majority of the cases are located in the distal esophagus and are associated with Barrett’s esophagus-related diseases [3]. Also in a study done by Deng et al, Yun et al, Huang et al, the common locations of the esophageal NEC were in the middle followed by lower (34.7%) segments of the esophagus [4-6]. In majority of the cases, submucosal growth and ulcerative growth pattern along with areas of necrosis and hemorrhage was described in the NECs. However, esophageal NECs have a tendency for endoluminal growth. They tend to infiltrate into the muscular layer as well as the serosa layer, suggesting it to be aggressively invasive [2]. Small cell esophageal NEC is the most common histopathological variant. However, Maru et al, reviewed 40 cases of esophageal NEC, out of which 27 cases were of the large cell type [7]. In contrast, Hong et al revealed that majority of NEC are of the small cell type [2]. In our case series, all the three cases were small cell variant of NEC.

An accurate pathological diagnosis of NECs is quite challenging due to difficulties in distinguishing NECs from other poorly differentiated esophageal malignant neoplasms. NECs have often been misdiagnosed as SCCs due to co-existence of squamous cell carcinoma and/or adenocarcinoma are also often observed [3]. Huang reported that over 80% of NEC of the esophagus has synchronous squamous neoplasm [1]. Generally, neuroendocrine biomarkers, such as Synaptophysin and Chromogranin, are essential for the diagnosis of NECs. IHC is very useful for identifying typical NEC histology and cell differentiation [2].

A high prevalence rate of lymph node metastases and distant metastases has been observed for esophageal NECs. Recently, Nayal et al, analysed that 72% cases of small cell carcinoma have distant metastases, the liver and lung being common sites [8]. In than study Huang et al, demostrated that half of esophageal NEC cases have lymphovascular (50%) and lymph node metastasis [6]. As per literature, lymph node metastasis has been observed early in the neuroendocrine carcinoma of the esophagus, and that the ratio of lymph node metastasis is higher than for esophageal squamous cell carcinoma. Patients with lymphadenectomy have good prognosis [2]. Early diagnosis and treatment are important as surgery has a limited effect, although postoperative adjuvant radiation and chemotherapy can obviously improve prognosis [2]. The prognosis for pure NEC is poor, since there is a high likelihood for disease recurrence which could be a result of early lymphatic spreading and distant metastasis. However, there is no difference in prognosis between the large cell type and small cell type. There are limited reports concerning the outcome of patients with esophageal NEC, owing to the rarity of the disease [2]. Some have reported that invasion depth is the key factor for determining the survival of NEC patients [2].

Due to lack of sufficient data regarding the clinicopathological characteristics of esophageal NEC, there were no standard treatment strategies available yet. The role of surgery in esophageal NEC still remains controversial, even though some of the similar studies have revealed long-term survival after surgical resection of esophageal NEC [3,4].

The case may be diagnosed as poorly differentiated carcinoma in small biopsies. Hence, a higher degree of clinical suspicion about the entity is required for diagnosis.

All the authors have contributed to concept, literature search, manuscript editing and review.

There was no source of funding for our research.

There are no conflicts of interest amongst the authors.