Background: Primary small intestinal volvulus is one of the common causes of intestinal obstruction in various localities of the developing world. Although operative intervention has been the usual mode of treatment; this case report depicts with meticulous follow-up & care, there is a possibility for relief of obstruction with non-operative management.

Small bowel volvulus is a condition in which there is torsion of all or a segment of the small bowel and its mesentery: this can lead to bowel obstruction, ischemia, infarction, or perforation. The typical patient with the primary volvulus of the small intestine was found to be a young adult, male, muscular, farmer, from a rural area whose diet was bulky and mainly made of cereals [1, 2].

A 20-year-old male patient presented to Nefas Mewcha primary hospital Emergency department in January 2020 with the main complaint of crampy abdominal pain and distention of 14 hours duration. Associated with this, he also had nausea and frequent bilious vomiting of eight times. He had passed feces 24 hours ago. He had no fever, cough, chest pain or night sweating. He had no history of similar illness before, no history of previous abdominal surgery. H is a not married and claims to be not sexually active. Lives with his parents has 3 sisters and 2 brothers. He makes a living as a farmer. There are no medical illnesses that run in the family. There was no history of tobacco smoking or substance abuse. He consumes a local alcohol made of sorghum occasionally. At presentation, his blood pressure was 105/60 mmHg, pulse rate was 68 Beats Per Minute (bpm), respiratory rate was 18 per minute, and temperature was 36.2 °C axillary. Physical examination of the patient at presentation, the patient was acutely sick looking in pain; not in cardio respiratory distress. He had a dry tongue and buccal mucosa. No palpable lymph adenopathy in all accessible areas. Chest was clear and resonant. S1 and S2 cardiac sounds were well heard and there were no added cardiac sounds. Abdomen was slightly distended, moves with respiration, anks were full, there were no scars, no distended veins and hernia sites were free. Palpation revealed a tense abdomen with no area of tenderness, no shifting dullness, hyper tympanic percussion note, bowel sounds were 35 per minute. There is scanty stool on the examining nger, with no blood on it from digital rectal examination, no palpable mass was detected. The patient was conscious and neurological examination was intact. A complete blood count of our patient showed: White Blood Cells (WBC) 12500 mcL, Red Blood Cells (RBC) 4.6 mcL, hemoglobin (Hgb) 16 gm/dL, Hematocrit (Hct) 48%, Mean Corpuscular Volume (MCV) 89.1fL, platelets 470 × 103, creatinine 0.6, Blood Urea Nitrogen (BUN) 30, Alanine Aminotransferase (ALT) 28, Aspartate Aminotransferase (AST) 24, Alkaline Phosphatase (ALP) 48, albumin 4.3, total bilirubin 1.1, and direct bilirubin 0.4. Plain abdominal X-Ray showed centrally distributed, distended small bowel loops and rectal gas shadow (Figure 1). CT scan is not available at this setup so it was not possible to do one. 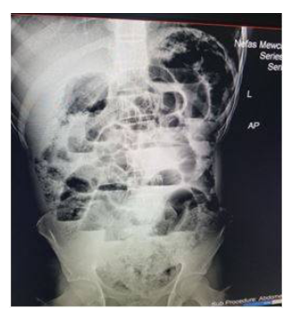 The diagnosis of acute abdomen secondary to small bowel obstruction secondary to primary small bowel volvulus plus stage I shock was entertained, double intravenous line was inserted, and Transurethral catheter inserted, Naso-gastric tube was inserted. Three Liters of normal saline was given over a course of 2 hours, at emergency department. The patient was admitted to the ward was advised on the possible options of management, consented on conservative management, associated risks and the possibility of surgical intervention at any time in the course of the management. The patient was kept Nil per oral, put on maintenance uid and replacement of ongoing losses. Nasogastric tube produced 600 ml of bilious content during the rst 6 hours; which was replaced with equal amount of ringer lactate. The abdominal cramp subsided after 4 hours of inpatient admission. After 12 hours of admission, the Blood pressure was 100/70 mmHg, pulse rate 68per minute and the abdominal distension decreased signi cantly and the bowel sounds were 26 per minute, there was no area of tenderness and the patient passed atus. Following 24 hours of admission the patient passed feces and vital signs were within normal range. Naso-gastric was removed and patient was initiated with sips. The patient tolerated sips very well and was observed for 24 more hours and discharged on next day. He was appointed to the surgical referral clinic after a week. On subsequent week the patient was seen at referral clinic; he had no change in bowel habit or any other complaint. His vital signs were stable and physical examination was detected no abnormality. He has been followed every month for 3 consecutive months and has reported no recurrence of symptoms.

Volvulus is the Latin word for rolled up or twisted and is derived from the verb ‘volvere’, meaning to roll or turnabout. By definition, volvulus is an abnormal twisting of the intestine which can impair the blood flow to the intestine. Volvulus can lead to gangrene and death of that segment of the gastrointestinal tract, intestinal obstruction, perforation of the intestine, and peritonitis [3]. Small intestinal volvulus in adults can be classified as primary or secondary. In the former there is no obvious anatomical cause involving the mesentery or the small bowel, whereas in the latter there is an abnormal fixation due to adhesions or bands leading to the twisting of the mesentery. The primary type is often seen in Africa and Asia [4]. It is a significant cause of primary bowel obstruction in sub-Saharan Africa [5]. It is the leading cause of small bowel obstruction in Ethiopia [6]. It is a rare entity in Western adults [7]. Clinical signs & symptoms were unspecific & resembled intestinal obstruction [8]. The most frequent symptom was observed to be sudden abdominal pain [9]. Vomiting was also observed in most of the patients while abdominal distention and constipation were reported less frequently [10]. Clinical examination reveals abdominal distension and/or diffuse tenderness with or without signs of peritonitis [8]. Small bowel volvulus is a rare but life-threatening surgical emergency. Owing to its rarity, it is seldom entertained as a differential for small bowel obstruction [11]. One of the challenges in managing primary small bowel volvulus operatively has been the risk of subsequent adhesion obstructions. The risk of occurrence of adhesion obstructions among patients that underwent laparotomy in general was reported to be 4.6% [12]. This gives rise to the endless circle of obstruction and subsequent operation which further increase the risk more.

Biniam Ewnte will be the primary and only author of this case report. The author read and approved the nal manuscript.

No funds were used to write this case report.

All the images and detailed information of this case are available at Nefas-mewcha primary hospital digital patient record and can be submitted upon request.

The ethical board review of the hospital has approved the publication of this case report. Facial images describing the patient discussed will not be used. The patient has provided written informed consent to get the case published.

Written informed consent was obtained from the patient for publication of this case report and any accompanying images. A copy of the written consent is available for review by the Editor-in-Chief of this journal.