Papillary Muscle Hydatid of Heart: A Rare Case of Disseminated Hydatidosis in A Young Female with Multisystemic Involvement

Hydatid disease, a zoonosis, most commonly caused by the parasite Echinococcus granulosus, involving the cardiac and brain is rare accounting for 0.5-2% and 2-5% respectively. The disseminated hydatid disease is associated with poor prognosis. A 35-year-old, female, from rural background presented cardiac OPD, PGIMER, Chandigarh in 2016 for vague discomfort in the chest and right hypochondrium. Her past medical records revealed neurosurgical intervention for the right frontal cerebral cystic lesion with negative hydatid serology, which was proven to be hydatid cyst on histopathological examination in the year 2011. Increase in the intensity of the above-mentioned chest discomfort. Echocardiography was advised which revealed a cystic lesion in the left ventricle, subsequent cardiac MR examination revealed cystic lesion in anterolateral papillary muscle of the left ventricle and the contrast examination of the abdomen revealed disseminated hydatid disease in abdomen with raised hydatid serology titers at present. Patient requested medical management over surgical intervention, and she was on tablet Albendazole 400mg every 12 Hrs. After 3-4months patient succumbed due to the anaphylaxis resulted from ruptured mesenteric hydatid cyst. Presence of isolated cerebral or cardiac hydatid disease should warrant the physicians to evaluate systematically and follow up the patient frequently with the available cross sectional imaging, which may aid in early detection and holistic management of the patient. Irregular follow up visits or non-intentional negligence of the meticulous evaluation of the subjects with hydatid disease in organs other than liver and lungs, can predispose to the disseminated disease and early mortality as witnessed in the present case.

Disseminated hydatid disease is a rare manifestation of the cestode infection and it results from the hematogenous/ lymphatic spread or surgical spillage. Ultrasonography is the most widely used modality to diagnose hydatid disease whereas complications and extrahepatic site disease warrant CT and MRI imaging is essential for diagnosis, ascertaining stage of disease and suggestion of therapeutic management. Knowledge of route of spread and being familiar with atypical presentation of hydatid disease helps in the holistic approach to the patient management. Lastly, importance of early systemic evaluation of atypical hydatid disease to combat fatality.

A 35-year-old, female, homemaker, hailed from the hilly areas of the Northern India presented to the cardiac center outpatient department (OPD), Post Graduate Institute of Medical Education and Research (PGIMER), Chandigarh, in July 2016, with complains of the heaviness and vague pain in the right hypochondrium for one year. She also had complained of mild exertional dyspnea (functional grade II) and chest pain from past 6 months. She had no history of peptic ulcer disease or trauma to the upper abdomen. Her previous medical reports revealed the information about the intracranial cystic lesion in the right frontal cerebrum, which was causing repetitive generalized clonic tonic seizures and recurrent vomiting for which she was operated in December 2011. Surgical pathology reports suggested the diagnosis of hydatid cyst based on the evidence of protoscolices, hook lets and hydatid membranes visualized in the provided surgical specimen. Prior to the operation, ELISA test for hydatid serology was negative and cross-sectional imaging of the chest and abdomen showed no remarkable abnormality. In post-operative period patient was doing well for 4 years, she was not on regular follow up and she was not been advised any radiological or other serological tests in this period.

In the present visit her chest and right upper abdominal discomfort worsened for past one week. Her general physical examination and vitals examination were normal. Her complete blood counts, differential blood counts, coagulation profile and lipid profile was normal. Electrocardiogram revealed no ischemic changes and Troponin I was within normal range. ELISA test for hydatid serology was 15 (cut off 5). Chest radiograph was normal. Echocardiography revealed the presence of a cystic lesion in the left ventricle. There was no cardiac valvular or functional dysfunction noted on echocardiography. Subsequently the she was subjected for cardiac magnetic resonance imaging (MRI) and contrast enhanced computed tomography (CT) examination of the abdomen and pelvis. 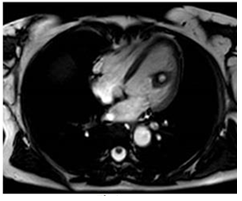 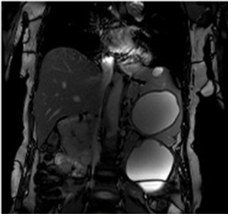 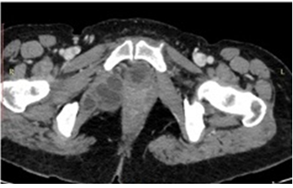 The patient was informed about the wide spread involvement of the infection and she was counselled for the surgical management, however, patient requested for the medical management. She was on tablet Albendazole 400 mg every 12 Hrs for 3-4 months. On follow up patient succumbed due to anaphylaxis resulted from the ruptured mesenteric hydatid cyst.

Hydatid disease (HD) is a zoonotic, parasitic infestation caused by the larvae of Echinococcus granulosus, which is endemic worldwide —Asia, Africa, and South America1. Humans are infected as an accidental host after consumption of infected sheep (definitive host) or larvae on unwashed vegetables [1]. HD is seen frequently where animal husbandry is practiced. Usually, the consumed larvae get absorbed by the intestinal mucosa, reach portal venous system and thereby further into the systemic circulation, which essentially explains why hepatic and pulmonary hydatidosis is common [2]. HD can affect any and/or multiple organs but hepatic involvement is most common followed by lungs; other organs, including the spleen, kidneys, heart, peritoneum, muscles, brain, pancreas, scrotum and thyroid are also involved [3]. Becoming familiar with the route of spread, clinical findings at presentation and possible complications involving each site may be useful for the radiologist when evaluating imaging findings in patients suspected of having HD.

Rarely hydatidosis can also manifest as a disseminated disease involving multisystem organs as in this case. After gaining entry into portal circulation larvae would have lodged in liver and heart after which it would have become easier for systemic spread into the brain, intra-abdominal organs and peritoneum by pumping heart through the vascular system. Hepatic (~50-70%), renal (5%) and splenic (4%) involvement are possible by arterial and portal venous dissemination. Pulmonary hydatid disease (~20-30%) spread can be due to the filtration of larvae in pulmonary capillary bed or due to the trans-diaphragmatic spread [4, 5]. Cardiac (0.5-2%), brain (2-5%), adrenal gland (7% of adrenal cysts) and parietal wall (rare) involvement is suggestive of intra-arterial involvement. When cardiac involvement is present in Echinococcal disease, the cysts are usually located in the left ventricle (20-52%), the interventricular septum (10-42%), and the right ventricle (10-31%) and less frequently in the atria, the pericardium and the pulmonary artery. Left ventricular involvement occurs due to dissemination through coronary artery [6]. The continuous cardiac motion offers relative resistance to the hydatid cyst implantation, rarely cyst may get implanted into the myocardium. Small cysts in initial phase may be asymptomatic and later may become symptomatic due to the increase in size, invasion into the conduction system or compression of the cardiac structures. Cardiac arrythmias can be seen if conduction system gets invaded by the cysts and coronary vascular compression by the cyst causes acute coronary syndrome sometimes. Hydatid cyst rupture, anaphylaxis, cardiac tamponade, systemic and pulmonary dissemination or thrombosis are the major complications associated with the cardiac hydatid disease. Mesenteric involvement can be possible by lymphatic route and rupture of a hydatid cyst into peritoneal space. Aortic involvement has also been reported due to intimal tear and vaso-vasoram spread [6].

A well-defined cystic lesion with septae, calcification and daughter cysts are the cardinal features of hydatid disease on imaging [6]. All commonly employed imaging modalities like ultrasonography, computed tomography, and magnetic resonance imaging are capable of demonstrating these cardinal features and are found to be very much helpful in the early and non-invasive diagnosis of the condition. Superimposed complications like cyst rupture, bleeding, and/or superadded infection can mask the typical face of the hydatid disease, even sometimes site-specific variations in imaging findings can also add to the doubtful diagnosis while evaluating or rarely may result in misdiagnosis too [6]. Hence becoming familiar with holistic manifestations of the hydatid diseases with regards to its site and specific features of HD seen at variable sites can help in improving noninvasive diagnostic accuracy. Sonography is most widely and effectively used modality for evaluation of hydatid disease.

Cross-sectional modalities (CT and MRI) are essential when detailed anatomic specificity is required and good at demonstrating daughter cysts. Cross-sectional imaging is invaluable in the detection of complications and characterizing extrahepatic hydatid disease [7]. No definitive enhancement of the cyst wall or septa or membranes on post contrast cross sectional examination study suggests hydatid disease as no component of cyst material arises from the host tissue. However, obvious post contrast enhancement in proven case of hydatid disease warrants superadded infection and consideration of other differential diagnosis in the setting low prediagnostic probability. Imaging appearance can correlate well with the stage of the disease and thereby guides recommendation for treatment of the disease [7]. Table 1, provides the typical imaging features varying with pathological stages of the disease along with remarks for therapeutic management [7]. Therapeutic management depends on the site, number, size and imaging characteristics of the disease. Lesions smaller than 5 cm are treated alone with antihelminthics. Lesions more than 5 cm are better treated with surgery. Lesions larger than 5 cm with few imperceptible septae in the liver and kidney can be treated by puncture, aspiration, injection, and re-aspiration (PAIR). Certain locations like cardiac, spleen, mesentery and brain essentially treated by surgery. Care should be taken to avoid spillage resulting in anaphylaxis and dissemination of disease. Adjuvant antihelminthic therapy is advised after surgery or PAIR. Calcified or inactive lesions are managed conservatively [7]. Particular attention to be paid is that not all calcifications are suggestive of degenerative changes as calcification is seen in almost all stages of the hydatid disease.

Table 1: WHO sonography based classification of hydatid disease.

Hydatid disease is zoonotic endemic disease reported worldwide. Even-though hepatic and pulmonary hydatid diseases are predominantly documented, any organ in the body can be a host site for this cestode. USG, CT and MRI modalities show typical features of hydatid disease; other cystic lesions including neoplastic conditions are not confidently ruled out on imaging. Becoming familiar with routes of spread, specific imaging features and site-specific characteristics along with the image-based classification of the hydatid disease aids in early diagnosis as well as treatment of the condition.