In summary, this is the first case report of a pediatric patient with MOG encephalitis, first presenting stroke-like symptoms, reminiscent of the newly described FLAMES syndrome.

Myelin oligodendrocyte glycoprotein (MOG) is found exclusively in the central nervous system (CNS) [1]. MOG antibody disease (MOGAD) is an inflammatory demyelinating condition that can present as monophasic or relapsing forms [2]. Clinical phenotypes of MOGAD are variable, occur more often in children, and range from isolated opticus neuritis (ON) to acute disseminated encephalomyelitis (ADEM) [2-4].

A recently described phenotype primarily in children is MOG encephalitis characterized by fever, headache, somnolence, seizures, a typical imaging pattern, and good response to steroids [5]. Here we describe a girl with MOG encephalitis reminiscent of FLAMES presenting stroke-like symptoms, which has not been described in this context before. As acute treatment with intravenous methylprednisolone (IVMP) and slow steroid tapering leads to a favourable outcome [6], a timely diagnosis and treatment is important to prevent relapse or long-term sequela [5]. This case report expands the spectrum of clinical symptoms of MOG encephalitis and aims to extend the warning signs that should lead to autoimmune diagnostics.

A previously healthy 12-year-old girl was admitted to the hospital with slurred language, hemiparesis with facial palsy on the left side, and headache. Brain MRI showed a faint hyperintensity on diffusion weighted imaging (DWI) in the right thalamus with a discreet corresponding hyperintense lesion on FLAIR images and equivocal DWI-signal in the right parietal cortex and left thalamus (Figure 1a and 1b). Laboratory findings revealed only a mild leucocytosis. Four hours after symptom onset, left focal seizures with twitching of the left face developed. Treatment with clonazepam led to behavior abnormalities. A second brain MRI performed the very next day showed restricted diffusion on DWI and cortical hyperintensities on FLAIR images in the right parietal and right frontal cortex (Figure 2a and 2b). Because of ongoing focal seizures and headaches, our patient was treated with levetiracetam. An electroencephalogram (EEG) showed profound right hemispheric slowing in keeping with a lesion or a post-ictal state.

Combining symptoms of one sided-hemiparesis, profound headache, impaired consciousness, nausea, and vomiting the differential diagnosis of hemiplegic migraine was considered. Slurred speech, hemiparesis of the leg, and facial palsy disappeared within hours of admission, whereas hemiparesis of the left arm and headache improved less rapidly. Treatment with valproate (VPA) stopped the seizures promptly. In a follow-up MRI on day 6, cortical edema in the right occipital cortex was clearly seen on T2-FLAIR-images (Figure 3a and 3b). Because of persistent vasogenic edema, dexamethasone was given orally for five days leading to significant clinical improvement of arm paresis. The girl was discharged home in good condition and she remained seizure-free with valproate therapy. Symptoms disappeared completely within three weeks.

One month later, the girl suffered from headache and fever episodes lasting for several days leading to a second hospitalisation. Viral infection was suspected and symptoms were treated with nonsteroidal anti-inflammatory drugs (NSAID). Again, blood analyses revealed solely leucocytosis. A brain MRI showed leptomeningeal enhancement in the right hemisphere (Figure 4a and 4b). Lumbar puncture revealed pleocytosis (231/µl), elevated protein (782 mg/l), and positive oligoclonal bands. Autoimmune antibodies were outstanding when treatment with antibiotic and antiviral therapy was introduced. Serum and liquor samples showed negative results for extensive testing for infection. Clinically, headache and fever episodes did not improve for another week despite normalization of leucocytes.

Eventually, MOG antibodies were detected in CSF (live cell-based assay [9], titer 1:4) and serum (titer 1:160). Testing of other antibodies revealed GluN1 NMDAR antibodies in CSF (cell-based assay, titer 1:2, confirmed by tissue-based testing using rat-brain immunohistochemistry) but not in serum. Altogether clinical presentation with seizures, fever, and behavior abnormalities, accompanied by focal MRI abnormalities and MOG antibodies, led to the diagnosis of MOG encephalitis and coexisting NMDAR antibodies. A treatment with IVMP (20 mg/kg/d) for three days was initiated. Headache and fever improved within hours. Steroid tapering for another 6 weeks with reduction of treatment to 2 mg/kg/d every second day to a final maintenance therapy of 10 mg prednisolone every alternate day was initiated. A routine follow-up brain MRI, in a symptom-free interval, 9 weeks later, showed regression of leptomeningeal enhancement. Blood samples revealed negative results for NMDAR antibodies and MOG antibody titers of only 1:80.

Three weeks after the end of steroid tapering, the girl again presented sudden onset of headache and loss of sensitivity in the right leg. Brain MRI revealed hyperintensities in the left parietal cortex on DWI with corresponding hyperintensities on T2-FLAIR-imaging (Figure 5a and 5b). Overall, the findings were consistent with a relapse. Acute therapy with IVMP (20 mg/kg/d) and additionally intravenous immunoglobulins (IVIG) (1 mg/kg/d) led to prompt improvement of clinical symptoms. Steroid tapering was performed for another 6 weeks. Since then, the girl receives IVIG-therapy monthly.

Under this maintenance therapy the patient remained relapse-free for eight months. Serum samples in the course of disease showed negative results for MOG- and NMDAR-antibodies. However, reoccurring focal epileptic seizures led to change of antiseizure medication from VPA to Oxcarbazepine (OXC) monotherapy.

13 months after her first presentation to hospital, our patient suffered from ongoing headache for 3 weeks, non-responsive to NSAIDS, once again. Due to hyponatremia (129 mmol/l) and high level of OXC in serum (38 μg/mL), a reduction of antiseizure medication was initiated. CSF showed mild pleocytosis (12/µl) and mildly elevated protein (482 mg/l). A few days later, paraesthesias and focal seizures appeared and our patient was treated with IVMP. Antiseizure medication was extended with low dose VPA, leading to prompt recovery. MOG antibodies in serum and CSF were negative in retrospect for that broadening of maintenance therapy was not initiated to date. 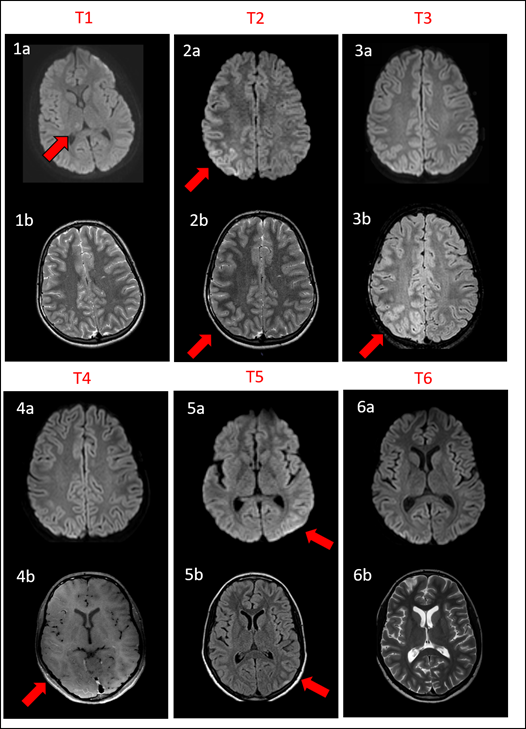 Figure 1: Brain magnetic resonance imaging (MRI) of our patient with MOG encephalitis. On the first day of admission (T1) a focal hyperintensity in the right thalamus is demonstrated on axial diffusion-weighted-images (DWI) (1a). There is no cortical edema visible on axial T2-weighted images (1b). On the second day of admission (T2), increased signal in the right parietal and occipital cortex on axial DWI, (2a) with only very slight vasogenic edema on T2-weighted images (2b) is seen. One week after the first MRI (T3) on axial DWI the hyperintensities have resolved (3a). Cortical swelling in the right occipital cortex is more clearly discernible on T2-FLAIR-images (3b). On the second admission to the hospital (T4), no pathologies were seen DWI (4a), but leptomeningeal enhancement throughout the right hemisphere was seen on contrast-enhanced T1-weighted images (4b). As part of a follow up two months after the second admission to the hospital, no pathologies were seen on axial DWI or contrast-enhanced T1-weighted images (not shown). On the third admission to the hospital (T5), hyperintensities in the left parietal cortex were seen on DWI (5a), with corresponding hyperintensities on axial T2-FLAIR-imaging (5b). During another follow up one month after the last admission to the hospital (T6), no pathologies were seen on DWI (6a) and T2-images (6b).

This case report illustrates the variability of symptoms of autoimmune encephalitis associated with MOG antibodies. Our 12-year-old patient first arrived with stroke-like symptoms and headache. Only in combination with positive MOG antibodies the diagnosis of autoimmune encephalitis associated with MOG antibodies was made, in adults described as FLAMES. Until today, case series for FLAMES are rare. The first description was given by Ogawa and his team in 2017 [8], who identified four male adult patients with unilateral hyperintensities in T2-FLAIR-MRI and positivity for MOG antibodies. All four patients showed abnormal behavior, suffered from epileptic seizures, and recovered quickly after therapy with high dose IVMP. Budhram et al. were responsible for the original naming of FLAMES in 2019 [7]. They reviewed literature from 2009 until 2019 and identified 20 patients (age ranging from 11 – 46 years, mean age 29 years) with predominantly unilateral cortical hyperintensities in T2-FLAIR-MRI and positive MOG antibodies in serum or CSF. 85 % suffered from epileptic seizures, 70 % reported headache, 65 % reported fever, 55 % had neurological symptoms referable to MRI-findings, and 95 % reported at least two of these four findings.

Additionally to initial MRI description by Ogawa et al., contralateral cortical signal abnormalities, adjacent sulcal T2-FLAIR hyperintensities, and leptomeningeal enhancement were reported by Budhram and his team7. Hence, MRI-findings are not solely pathognomic for FLAMES, making differential diagnosis of CNS infection difficult. Like in our patient, only the combination of clinical symptoms, MRI-findings, and autoimmunity diagnostics in liquor leads to diagnosis of MOG encephalitis.

After diagnosis is made, the question of maintenance immunosuppressive therapy to prevent relapses arises. In October 2020, Bruijstens, Rostasy et al [6] suggested a consensus-based treatment recommendation for pediatric MOGAD (see Table 1). Patients treated with IVMP during an acute phase following slow steroid tapering up to three months showed a favourable outcome. IVIG and plasma exchange present alternative therapies in case of insufficiency or incompatibility of IVMP. After the first relapse (new clinical episode compatible with radiologic evidence at least one month after last attack) maintenance therapy should be initiated (see Table 1).

As recommended, our patient was treated with high dose IVMP (20 mg/kg/d over three days) [6]. This led to prompt recovery. IVMP is also recommended as a first step when a patient rearrives with relapse [10]. However, the effectiveness of acute IVMP therapy in relapse prevention remains uncertain [6]. Studies describing oral steroid tapering, comparing prednisolone doses and duration, are limited but show vulnerability to relapse on steroid reduction and cessation [11].

After the first relapse, our patient was treated with IVIG (1 g/kg/d monthly over two days) and did not experience further relapses for eight months until headache and seizures reoccurred. With outstanding anti MOG antibodies in CSF and negative anti MOG antibodies in serum, a second relapse could not be proven. Monthly IVIG was continued. To date, she remains relapse-free.

In our patient, autoimmune diagnostics showed positive results for NMDAR and MOG antibodies. Antibodies against MOG- and NMDA-receptors can coexist in children with autoimmune encephalitis [5, 12, 13]. Patients with both, positive MOG and positive NMDAR antibodies, showed increased risk of relapse and a high percentage of preceding infection [14]. In general, high and persisting titers are associated with a relapsing course. Wegener-Panzer et al. demonstrated in 2020 that five out of ten children with MOG encephalitis had relapses and that initial MOG serum titers in pediatric patients were higher in patients with relapses (median 1:640) than in patients without relapses (median 1:60) [5]. In addition, persistent MOG antibodies over time increase risk for relapse, although conversion to MOG antibody serum-negativity over time does not preclude relapse [15]. All in all, our patient was at high risk for relapses.

In our patient, interictal EEGs showed profound hemispheric slowing without epileptic discharges during acute symptoms twice, whereas EEGs in symptom-free intervals were normal in accordance to MRI-improvement. This finding is consistent with previous studies [5].

In conclusion, our case report aims at increasing awareness for autoimmune encephalitis associated with MOG antibodies which can occur in children. Any focal, mostly cortical T2-FLAIR hyperintensity detected in the context of new onset focal seizures should trigger a suspicion of MOGAD and serum testing for MOG antibodies. Importantly, different test systems with variable sensitivity and specificity exist [16] and care must be taken to correctly interpret serological findings. Relapsing fever and peracute onset of motor symptoms can be an additional valuable clinical hint and should lead to autoimmune diagnostics.

We thank our patient and her family for participating in this case report.

None of the authors has any conflict of interest to disclose. We confirm that we have read the Journals position on issues involved in ethical publication and affirm that this report is consistent with those guidelines.