Neonatal appendicitis (NA) is a rare condition. It has a low incidence of 0.04-0.2% and is more common in premature male babies. NA should be considered in the differential diagnosis in cases when a newborn does not present with clinical signs of Hirschsprung's disease, Cystic Fibrosis and passes meconium normally. The causative etiology of neonatal perforated appendicitis (NPA) is a subject of debate and has not been elucidated. Although many etiologic theories exist, increasing evidence suggests a subset of NPA cases may represent a form of necrotizing enterocolitis (NEC) localized to the appendix. A 6 days old male-baby presented at the NICU with generalized abdominal tenderness, the patient was febrile, with tachycardia and mild respiratory distress. The X-ray showed massive pneumoperitoneum. Intraoperatively, perforated appendix was found and appendectomy was performed. The abdomen was washed with ample saline and closed in layers. Neonatal appendicitis usually presents with non-specific symptoms and signs. Because of its rarity and low index of suspicion, it poses a great diagnostic challenge pre-operatively.

Neonatal Appendicitis (NA) is a rare clinical entity [1]. It accounts for an incidence of 40 per 100,000 live births and is more common in premature male babies [2]. NA presents most of the times with non-specific symptoms and signs, and is usually associated with prematurity or with certain comorbidities including Hirschsprung’s disease, cystic fibrosis, inguinal hernias and cardiopulmonary defects [3]. Most of the time the diagnosis is delayed and is made after perforation has occurred [4]. Neonatal perforated appendicitis (NPA) is uncommon and increasingly being recognized as a localized form of NEC involving the appendix [5]. NA it is a difficult surgical entity to diagnose especially in newborn babies that has passed meconium well and with no signs of Hirschsprung’s disease or Cystic Fibrosis [6]. However, most of the cases of neonatal appendicitis have occurred in preterm neonates, just a few cases have been reported in neonates with no comorbidities and born at term. We present a case of neonatal appendicitis in a 6-day old male born at term with apparently no underlying comorbidity who developed perforated appendicitis, this in order to promote awareness of the high morbidity and mortality that could be avoided by an early diagnosis and appropriate treatment.

A 6-day old full-term male baby was admitted to Neonatal Intensive Care Unit with clinical signs of progressive abdominal distention, irritability and reluctance to feed. Weight at birth was 3.2 kg and had passed meconium within 24 hours of birth. There were no significant perinatal events. Physical examination showed that the boy was lethargic, febrile (38ºC), with tachycardia (146/min) and mild respiratory distress. Abdomen was distended, tense and tender.

The patient got admitted to the Neonatal Intensive Care Unit where he was stabilized with IV fluids and broad-spectrum antibiotics. With a clinical diagnosis of acute abdomen, patient underwent exploratory laparotomy. Intraoperative findings revealed free fluid in the abdominal cavity, perforated appendicitis with a big perforation present at the base of the appendix (Figure 2). During exploration, there were no ischemic patches on the small bowels and the large bowel was of normal caliber, (Figure 3 and Figure 4). Appendectomy was performed and the appendix was sent for histopathological examination. Gentle peritoneal lavage was done and abdomen was closed in layers. 7 days after operation laboratory results revealed normal WBC=7.5/mm3 and PLT=164 × 109/L. The baby subsequently having a smooth and uneventful postoperative recovery. The histopathological report confirmed the gangrenous nature of the removed appendix, with acute inflammatory changes and lymphatic hyperplasia. The outcome was favorable. The patient was on regular follow up for six months and did well. 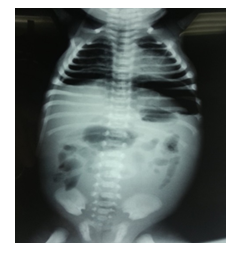 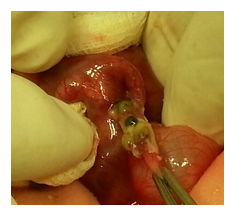 Figure 2: The site of perforation of the appendix intraoperative view. 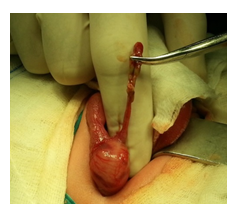 Figure 3: The site of perforation-frontal view. 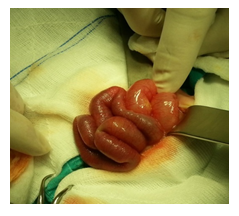 Acute appendicitis is a rare surgical condition in neonates. The incidence of appendicitis in neonates varies from 0.04% to 0.2% and is more common in premature neonates [1, 7]. NA occurs in males approximately 75% of the time and 25 to 50% of all reported cases involve premature babies [8]. The delay in diagnosis and its complications like perforation and septicemia confers a high mortality rate of 28% [9]. Although the clinical signs are nonspecific, the most common findings are abdominal distension, tenderness, feeding intolerance, and fever [10]. Results of laboratory tests have less value for diagnosis in the neonatal period than for older patients [11]. The presentation of neonatal appendicitis can be similar to necrotizing enterocolitis and Hirschsprung’s disease thus leading to misdiagnosis and a significant morbidity and mortality in neonates [12]. Neonatal appendicitis does not appear to have any causal relationship with Hirschsprung’s disease or cystic fibrosis. Although many etiologic theories exist, increasing evidence suggests a subset of NPA cases may represent a form of necrotizing enterocolitis (NEC) localized to the appendix [8]. Association between NA and NEC deserves further investigations because both share the same spectrum of risk factors [13].

The vague clinical features along with low index of suspicion usually result in delay of diagnosis, predisposing to risk of perforation which is reported to be as high as 80% [14]. The perforation could be due to inflammation of the appendix or it could be the results of another disease process for example Hirschsprung's disease, necrotizing enterocolitis, meconium plug syndrome, cystic fibrosis and gastroenteritis. A thin appendicular wall and no distensible caecum predisposes to appendicular perforation in neonatal appendicitis. In neonates, the relatively small size and under developed peritoneal space with lower physiological reserve are possible explanations of the rapid spread of infection. These factors may contribute to high mortality rate due to perforation and peritonitis [15]. Even in the absence of correct clinical diagnosis, perforation - as indicated by pneumoperitoneum - appears to have prompted surgical exploration [16]. Consequently, the prognosis depends on the rapidity between diagnosis and surgical intervention, since the incidence of perforation is high [17].

Vital signs and laboratory assessment remain critical components of patient evaluation. Various abdominal radiographs are often the initial imaging study obtained in suspected necrotizing enterocolitis (NEC) but they fail to detect intraperitoneal free air in the setting of NPA [8]. However, according different authors, the presence of free air on plain abdominal radiograph may confer a more favorable prognosis by leading to early surgical intervention [10]. Computed tomography should not be used routinely in neonate due to poor quality and unnecessary radiation. Many authors recommend ultrasonic as the initial image in suspected neonates with appendicitis [18]. Given the rarity of NPA, management is currently driven by anecdotal experience and isolated case reports [19]. Management consists of simple appendectomy and peritoneal lavage with warm saline [20].

Although acute appendicitis is the most common surgical condition of childhood, it is seldom evoked in the neonatal period. Neonatologists and pediatric surgeons involved should be alert of variable presentation of this potentially lethal surgical condition, due to anatomical characteristics, inflammation and perforation of the appendix often occur rapidly. We should keep a high level of clinical suspicion, team work and include this entity in differential diagnosis of acute abdominal conditions in neonates, especially in newborns with no clinical signs of Hirschsprung’s disease, Cystic Fibrosis and those that have passed meconium well. A timely diagnosis contributes to a lower morbidity and mortality in newborn period.