Peutz Jeghers Syndrome Revealed by Intestinal Intussuception: A Case Report and A Review of the Literature

Introduction: Peutz-Jeghers syndrome (PJS) is a rare autosomal inherited polyposis syndrome, characterized by multiple hamartomatous polyps in the gastrointestinal tract, associated with mucocutaneous pigmentation. Polyps mainly occur in the small intestine. Patients with PJS have an increased risk of many cancers. Histologically, the presence of a smooth muscle arborization within the lamina propria is the hallmark of those polyps. Intussusceptions is a rare complications of gastrointestinal polyps. In the present study, we report the case of this rare entity with particular histological features in a young woman who developed a jejunal obstruction caused by an intussusception.

Case Presentation: A 32-year-old woman presented to the emergency department with jejunal obstruction caused by an intussusception. She had a pigmented macules around the mouth and on the tongue. An urgent exploratory laparotomy was performed, revealing a distended invaginated ischemic part of proximal jejunum.Careful exploration of the abdominal cavity and intestine revealed multiple polyps inside the small intestine. On gross, one pedunculated polyp was found. Histollogically, it had a central core of smooth muscle showing a tree like branching with a pseudo-invasion like pattern due to the extension of glands in the subserousa.

Conclusion: PJS is a rare syndrome, which often remains undiagnosed for many years. Early diagnosis, treatment, and regular follow-up are important for an excellent prognosis in individuals presenting with this rare syndrome.

Peutz-Jeghers syndrome (PJS) is an autosomal dominant inherited polyposis syndrome, characterized by multiple hamartomatous polyps in the gastrointestinal tract, associated with mucocutaneous pigmentation, especially around the mouth [1]. It is a rare condition in most cases, attributed to mutation in STK11 gene [1]. Polyps vary in size (from few millimeters to 7 cm) and location (mainly found in the small intestine, but also in extra-intestinal sites) and may occasionally be absent [2, 3]. The histological diagnosis of a Peutz-Jeghers polyp is integral for the PJS’s diagnosis, which often remains undiagnosed until the identification of the polyps [4]. Histologically, they are characterized by a smooth muscle arborization within the lamina propria [4] associated to an elongated epithelial component and cystic gland dilatation extending [1]. Complications of gastrointestinal polyps include bleeding and abdominal pain due to intussusception, obstruction or infarction [1]. In addition to complications, patients with PJS have an increased risk of many cancers (most commonly luminal gastrointestinal cancers and breast cancer) [1]. In the present study, we report the case of this rare entity with particular histological features in a young woman who developed a jejunal obstruction caused by an intussusception.

A 32-year-old woman presented to the emergency department with a 2 days history of increasing crampy peri-ombilical abdominal pain, associated with nausea, vomiting and two episodes of non bloody diarrhea. She had no major medical troubles, nor family history of bowel disease. On physical examination, she was a healthy female with stable vital signs. Her abdominal exam revealed a tender abdomen with no peritoneal signs. The rest of physical exam showed a pigmented macules around the mouth and on the tongue (Figure 1).

The patient’s blood cell counts, serum electrolyte levels, lipase, renal and liver functions were within normal range. Abdominal ultrasonography revealed intussusception. An urgent exploratory laparotomy was performed, a distended ischemic part of proximal jejunum was found to be invaginated into a jejunal segment (Figure 2). Intestinal continuity was restored after resection of the ischemic small bowel. Careful exploration of the rest of the abdominal cavity and intestine revealed multiple polyps that were felt inside the small intestine. The patient was discharged on the seventh postoperative day, her postoperative course was uneventful. The diagnosis was confirmed by the histological study of the resected specimen. On gross, the small intestine measured 17 cm in length with necrotic appearance. On cut opening, lumen showed one pedunculated polyp measuring 2.5 × 2 cm. Hematoxylin-eosin stained sections revealed a polyp with a central core of smooth muscle showing a tree like branching. The mucosa showed a well differentiated cystically dilated glands without cytological atypias. Mucinous glands were extended through the bowel wall until the subserousa with a pseudo-invasion like pattern (Figure 3). Based on the following criteria: one PJ polyp and characteristic mucocutaneous pigmentation, the patient was diagnosed with PJS. 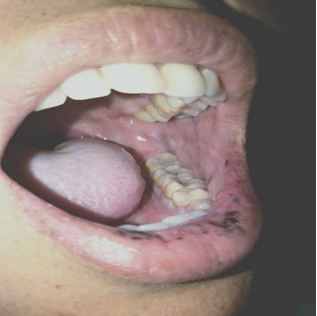 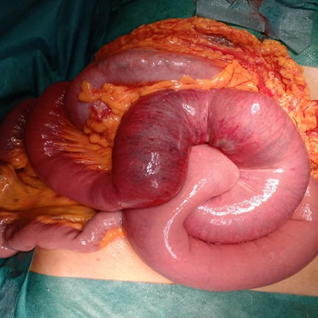 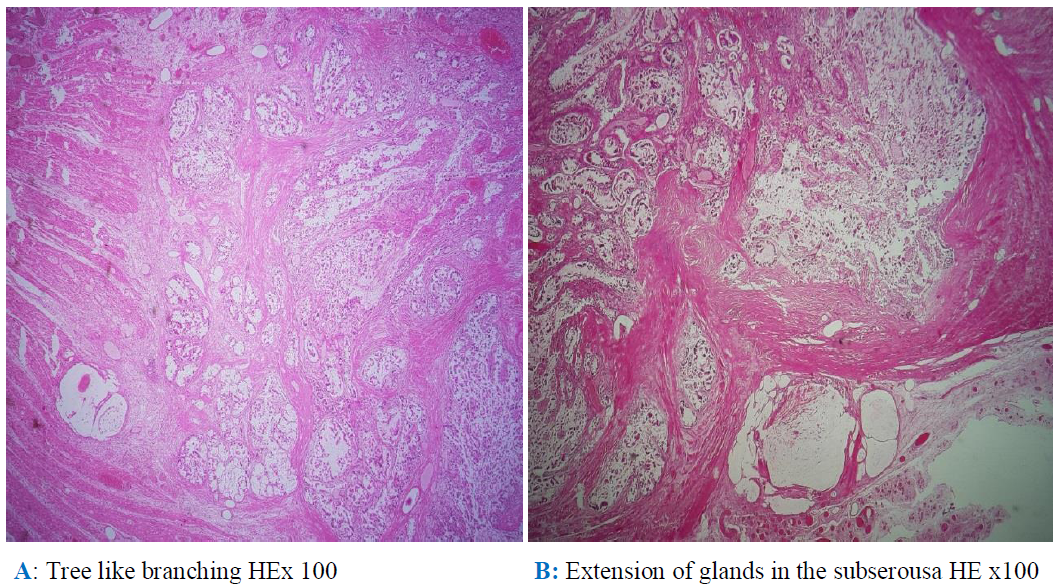 Figure 3A and 3B:  Peutz Jeghers polyp: Hematoxylin-eosin stained sections revealed a polyp with a central core of smooth muscle showing a tree like branching and a pseudo-invasion like pattern due to the extension of glands in the subserousa.

PJS is a cancer syndrome which was initially documented by an English physician in 1895 [1] and has been recognized as a distinct clinical entity in 1949 by Jeghers who defined it as the coexistence of mucocutaneous pigmentation and gastrointestinal polyposis. The estimated incidence of the syndrome is between 1 in 50 000 to 1 in 200 000 live births [1]. PJS might be sporadic or inherited, and in both forms, clinical manifestations are impressively heterogeneous [5]. No family history of PJS was detected in the present case suggesting a sporadic new mutation. It has been reported that one-third of patients are symptomatic by age 10, and that half of them have experienced complications including, intussusception, obstruction or bleeding, by age 20 [4]. Mucocutaneous pigmented lesions represent the first clue of the diagnosis, as it occurs in approximately 95% of patients with PJS [1]. They can be present at birth or appear during early infancy, and they might disappear with age except those of the buccal mucosa which tend to persist. The typical lesions are small pigmented macules commonly located around the mouth, eyes, nostrils, and perianal area and less often on the fingers, toes, hands, and feet [5]. The second clue of the diagnosis are the presence of hamartomatous polyps in the gastrointestinal tract and most commonly in the small intestine [6]. Other anatomic sites might be involved including bronchi, gallbladder, bladder and ureter. Clinically, the symptoms related to polyps include bleeding, anemia and abdominal pain caused by intussusception, obstruction or infarction of the polyps. They often occur in childhood, and 33% of the cases, they are seen by the age of 10 years. 50% of the patients develop polyp related-symptoms by the age of 20 years [1].

The diagnosis of PJS requires one of the WHO diagnostic criteria: (1) at least 3 hamartomatous polyps; or (2) hamartomatous polyps and a family history of PJS; or (3) mucocutaneous pigmentation and a family history of PJS; or (4) mucocutaneous pigmentation and hamartomatous polyps. Thus the histological identification of a Peutz-Jeghers polyp is a cornerstone for the diagnosis of the syndrome [4]. Histologically, a typical PJ polyp shows a diagnostically useful central core of smooth muscle showing a tree like branching pattern. The mucosa heaps into folds showing a villous pattern [7]. The precise classification of a Peutz-Jeghers polyp can be challenging as the characteristic arborizing pattern of smooth muscle fibers might occasionally be missing. In addition, the presence of smooth muscle fibers within the lamina propria is not a specific feature and cannot be only used as a diagnostic criterion, because virtually all colonic polyps tend to prolapsed. In a study, which has critically evaluated the morphological features of colonic PJ polyps, the lobular organization of colonic crypts have been identified in 68% of the cases, and has been considered as the hallmark of a colonic PJ polyp [4]. Furthermore, a pseudoinvasion pattern has been identified in up to 10% of the cases [7]. In fact, our case showed this particular pseudo invasion pattern associated with extension of the glands to the serosa mimicking a well differentiated adenocarcinoma. The pigmented macules histology shows an increased melanin in basal cells, secondry to an inflammatory block to melanin migration from melanocyte to keratinocyte [1]. The main differential diagnosis of a PJ polyp are other hamartomatous polyps especially juvenile polyps. Lack of lobulated pattern of growth, and the presence of abundant stroma between the crypts are useful diagnostic criteria [4]. The PJS gene is localized to chromosome 19p34-p36 and is known as STK 11(serine-threonine kinase) which acts as a tumour suppressor gene [1]. The familial form of PJS has been linked to a germline mutation involving the LKB1/STK1 gene [7]. However STK11/LKB1 mutations are rarely found in sporadic forms [5]. Other genetic abnormalities have been identified including: over-expression of COX-2, mutations in 19q13 gene, in 6p11 gene and in the MYH11 gene [1].

Based on epidemiological and molecular genetic studies, the cancer risk in PJS is substantial, as it is associated with a 10 to 18 fold excess of gastrointestinal and extra-gastrointestinal malignancies [7]. It has been proposed that a sequence hamartoma- adenoma-carcinoma pathway exists, as malignant transformation within a PJS polyp have been reported in some cases [1]. Furthermore pancreatic carcinoma represents one of the most common gastrointestinal malignancies reported [4]. Predisposition to cancer in multiple organs constitutes an important feature of this condition [7]. Females with PJS are at risk for ovarian sex cord tumors with annular tubules (SCTATs) mucinous tumors of the ovaries, adenoma malignum of the uterine cervix and breast cancer [8, 7]. In fact, Lim et al. and Hearle et al. have demonstated that the most frequent site of the malignant tumor after the gastrointestinal tract (colorectum, small intestine including the duodenum, and stomach), was breast, followed by gynecological organs (uterus and ovary), pancreas, and lung [9]. Surveillance protocols in PJS aim to detect gastroenterological polyps which could be responsible for obstruction or bleeding or intussusceptions [1]. The second purpose is the early detection of malignancies [1]. The surveillance protocol proposed by the American college of gastroenterology in affected or at-risk PJS patients include monitoring for colon, stomach, small bowel, pancreas, breast, ovary, uterus, cervix, and testes cancers. Risk for lung cancer is increased, but no specific screening has been recommended. It would seem wise to consider annual chest radiograph or chest computed tomography (CT) in smokers [10]. If discovered upon regular examination by endoscopy or imaging studies, polyps have to be resected to avoid polyps related- symptoms or complications [3]. Enterotomy is recommended for short lengths of heavily involved intestinal segments [11].

PJS is a rare syndrome, which often remains undiagnosed for many years. Early diagnosis, treatment, and regular follow-up are important for an excellent prognosis in individuals presenting with this rare syndrome.