Pneumatosis Intestinalis in Patients on Chemotherapy or Molecular Targeted Therapy: Report of 3 Cases

Pneumatosis intestinalis (PI) is a radiological term to describe the presence of gas in the bowel wall. It can occur as a primary disease or secondary to various other causes ranging from benign conditions to life-threatening diseases. We present three cases of PI in patients being treated for different types of gastrointestinal cancer. The diagnosis was made incidentally on follow-up CT scanning for two patients, who had only mild gastrointestinal symptoms. For the last patient, it was diagnosed in the setting of fever and clostridium difficile infection. A conservative treatment was advocated and follow-up imaging showed resolution of the PI in two out of three cases. It is important to distinguish between chemotherapy induced PI and other life-threatening causes of PI, which often require urgent surgery. After resolution, risks and possible benefits of restarting of the culprit agent should be outweighed.

Pneumatosis intestinalis (PI) is a term to describe the presence of gas in a linear or cystic form inside the bowel wall, mostly in the submucosa for the colon and the subserosa for the small intestine, although it can occur throughout the gastrointestinal tract. PI is a sign, not a disease, its relevance should be interpreted within the clinical context [1]. It is usually diagnosed by plain abdominal radiography or computed tomography (CT), but it could be documented by magnetic resonance imaging, ultrasonography or endoscopy [2]. Approximately 85% of PI cases are secondary; the remainder are idiopathic [3]. Bowel obstruction, perforation, ischemia, severe colitis and toxic megacolon represent the most life-threatening causes of PI, often necessitating urgent surgery. On the other hand, PI may be caused by numerous other more benign triggers, like digestive disease (inflammatory bowel disease, colitis, enteritis, blunt trauma, carcinoma, peptic ulcer), iatrogenic (endoscopy, intestinal anastomosis, enteric tube placement, barium enema), transplantation, infectious disease (HIV, candida albicans, clostridium difficile, mycobacterium tuberculosis), autoimmune and systemic disease, pulmonary disease (asthma, chronic obstructive pulmonary disease, cystic fibrosis). Drug induced PI is described for corticosteroids, chemotherapy and molecular targeted therapy. In clinical practice, it is of pivotal importance to distinguish benign PI from life-threatening PI, and the latter usually needing urgent surgical treatment [4]. Herein, we describe three cases of oncological patients with PI, caused by chemotherapy, a tyrosine kinase inhibitor and an infectious trigger.

A 58 year old male patient with a medical history of chronic pancreatitis, diabetes and obstructive sleep apnea, presented with steatorrhea. Imaging revealed a tumor in the head of the pancreas without evidence of distant metastases. Pancreaticoduodenectomy resection specimen confirmed a pancreatic ductal adenocarcinoma pT1cN2M0 and an R0 resection. Adjuvant chemotherapy was administered using the modified (m) folfirinox regimen. This multiagent regimen consists of the combination of 5-fluorouracil, irinotecan and oxaliplatin. The clinical course was complicated by persistent diarrhea (CTCAE grade 2), which was multifactorial in its etiology (exocrine insufficiency, chemotherapy-induced intestinal mucositis and high calory enteral nutrition). After four cycles of mfolfirinox, a CT of the thorax, abdomen and pelvis was performed because of general weakness and the patient’s increasing reluctance to continue adjuvant treatment. The CT revealed no signs of disease recurrence, but remarkable PI of the right colon. There was a previously described torsion of the mesentery and small intestine with unchanged appearance and no evidence of obstruction. No signs of ischemia, pneumoperitoneum, ascites, portal venous gas formation or intestinal dilatation were noted. Apart from the diarrhea and general weakness mentioned earlier, there was no abdominal pain or tenderness and the patient was hemodynamically stable. Laboratory results showed a normal C-reactive protein (CRP), slightly elevated white blood cell (WBC) count (12.2 × 103/microL, normal 3.9-10.6 × 103/microL), normal lactate dehydrogenase (LDH), normal renal function and slightly elevated serum lactate (3.2 mmol/L, normal 0.5-2.2 mmol/L). A conservative approach with intravenous fluids and careful observation was chosen. On day 2, the serum lactate had normalized. On day 3, antibiotics (clindamycin-levofloxacin) were started for a cellulitis of the right hand. The patient remained stable and no abdominal tenderness developed. He could leave the hospital on day 4. He refused further adjuvant treatment. CT scan follow up, performed after three months, showed persistent oncological remission and spontaneous resolution of the PI.

A 67 year old male patient was seen at the outpatient clinic for a follow up visit for a well differentiated small intestine neuroendocrine tumor with liver-, peritoneal- and omental metastases. He had been pre-treated with an ileocolic resection, a left hemihepatectomy, resection and ablation of several liver metastases and somatostatin analogues (SSA) maintenance treatment. At the time of the visit, he was under treatment with SSA and sunitinib since ten months. The patient was in good condition, but suffered from diarrhea (CTCAE grade 2). He had no abdominal pain, nausea or vomiting. Oncologic reevaluation CT scan showed stable disease, but revealed PI of the colon transversum and colon descendens (Figure 1A). No signs of ischemia, pneumoperitoneum, ascites, portal venous gas or intestinal dilatation were described. Vital parameters were normal and no abdominal tenderness was found. Lab results showed a slightly decreased WBC count (3.29×103/microL, normal 4-10×103/microL), a slightly elevated CRP (9,5 mg/L, normal <5 mg/L), normal LDH and renal function. The serum lactate was not tested, but no other indications of acidosis were noted (bicarbonate 35 mmol/L, normal 22-29 mmol/L). Stool culture, Clostridium difficile antigen and toxine tests were all negative. Sunitinib was withheld and ambulatory treatment with oral metronidazole 500 mg TID was initiated for a total duration of 4 weeks. Follow-up CT scan showed resolution of the PI (Figure 1B). Sunitinib was restarted and was given without recurrence of the PI for 2 years, until disease progression.

A 63 year old female patient with a pancreatic ductal adenocarcinoma and disease recurrence in the liver despite curative intent pancreaticoduodenectomy was treated with fourth line chemotherapy (mitomycin and 5-fluorouracil). She was admitted 7 days after her last chemotherapy with fever and dyspnea. A central venous catheter sepsis with Stafyloccocus epidermis was diagnosed and treatment with intravenous vancomycin was initiated. There were no clinical arguments for septic emboli. She had chronic diarrhea, which worsened after initiation of the current treatment line. A clostridium difficile infection had been diagnosed shortly before, for which she received treatment with oral vancomycine. On presentation, she suffered from persistent diarrhea and mild right upper quadrant without clinical evidence of peritonitis. CT showed PI of the transverse colon and descending colon with a pneumoperitoneum, but no signs of ischemia, ascites or portal venous gas formation. Blood results showed mild leukocytosis (11.2×103/microL, normal 4-10×103/microL), a high CRP (98 mg/L, normal <5 mg/L), a normal liver function except for a slightly increased gamma glutamic transferase (GGT) (125 U/L, normal <40 U/L), no significant acidosis, normal LDH and renal function. The PI was thought to be provoked by the clostridium infection. An initial conservative approach with oral vancomycine continuation, intravenous fluids and parenteral feeding was advocated. However, undulating fever persisted clinically despite negative blood-and stool cultures. Although the PI and accompanying pneumoperitoneum could be easily held responsible for the febrillitas, tumor progression was also suspected Follow-up CT scan after 1 week showed persistent PI and pneumoperitoneum, but also confirmed clear disease progression in the liver. A best supportive care approach was proposed, as there were no remaining valid oncological treatment options. The patient died at home one week later.

Figure 1A: Pneumatosis intestinalis (PI) of the transverse and descending colon with intramural and extraluminal gas formation on computed tomography (CT) as an incidental finding in a patient treated with sunitinib for a small intestine neuroendocrine tumor (case 2). 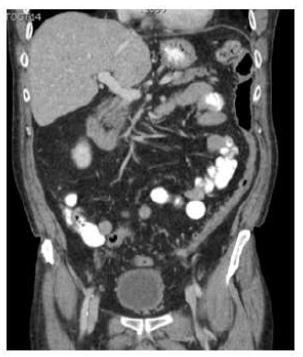 Figure 1B: Follow-up CT scan four weeks after discontinuation of sunitinib and treatment with metronidazole showing a complete resolution of PI.

Chemotherapy and molecular targeted therapy related PI is a rare condition, which is often paucisymptomatic and incidentally found on follow-up CT scan [5]. The pathogenesis of PI is not fully understood, but is likely multifactorial.

(A) Mechanical theory: due to a loss of mucosal integrity, intraluminal air penetrates into the bowel wall [2, 4, 6, 7].
(B) Bacterial theory: gas-producing bacteria translocate into the submucosal space through mucosal gaps or areas of enhanced permeability [2, 6, 7].

(C) Counterperfusion supersaturation: disequilibrium of luminal gas composition and pressure, for example by excess production of hydrogen due to bacterial overgrowth, can force gas directly through the mucosa. The gas can become trapped as air bubbles in the wall along the vasculatures [6, 7].

(D) In case of respiratory disease with alveolar damage, ruptured gas can dissect into the mediastinum to the retroperitoneum, where it can track along perivascular tissue planes to deposit into the bowel wall [6, 7].

The underlying mechanisms for PI linked to chemotherapy or molecular targeted therapy might be a damaged mucosal barrier, increased risk for infection and intestinal bacterial overgrowth [4, 6]. Furthermore, antiangiogenic therapy may lead to decreased capillary density of the intestine, which could prevent efficient gas diffusion and exchange across the blood vessels and bowel lumen, predisposing to supersaturation [6].

In case of PI in an oncological patient receiving chemotherapy and/or molecular targeted therapy, other causes of secondary PI should be excluded. Several chemotherapeutic and molecular targeted agents have been linked to PI development, including cyclophosphamide, cytarabine, vincristine, doxorubicin, etoposide, docetaxel, irinotecan, cisplatin, 5-fluorouracil, bevacizumab, sunitinib, sorafenib and cetuximab [5, 6, 10-13].

The scientific evidence for optimal conservative management is limited. In the absence of worrisome features, treatment usually consists of (at least temporary) discontinuation of the culprit drug. Initiation of antibiotics should be considered until clinical and radiographic resolution or a total duration of 3 months (preferentially metronidazole 500 mg per os three times daily), together with elemental diet, inhalation oxygen. In selective cases, hyperbaric oxygen treatment might be considered [3, 4]. Most cases described in literature, resolved with conservative treatment. Lee et al. summarized eight cases of PI associated with anti-angiogenic therapy (S1 plus bevacizumab, sunitinib or sorafenib). Five cases resolved with conservative treatment alone. The remaining three cases underwent surgical exploration, however all of them without intraoperative evidence of complications [6]. Kouzu et al. summarized six cases of chemotherapy related PI. Five cases were treated conservatively. One case underwent emergency surgery because of a high suspicion of ischemia, but turned out negative [11]. Shinagare et al. retrospectively reviewed 24 patients who were receiving molecular targeted agents (mostly bevacizumab (14/24) and sunitinib (6/24)) and developed PI, intestinal perforation or fistula. All patients with isolated PI, were treated conservatively and in all of them the findings resolved permanently once molecular targeted therapy was discontinued [5]. Especially during treatment with anti-angiogenic drugs, it is essential to avoid unnecessary surgical intervention as these drugs can cause serious wound-healing complications [14].

After resolution, the decision on re-challenge with the culprit drug can be hard and should be individualized. In the review by Shinagara et al., molecular targeted therapy was withheld for most patients with PI or perforation or fistula (22/24). Findings worsened in both patients continued on targeted agent treatment and recurred in three out of four patients upon rechallenge after initial resolution. It is remarkable that findings resolved in all of the patients receiving combination chemotherapy in which only bevacizumab was withheld and conventional chemotherapy was continued [5]. Case reports in which the chemotherapeutic agent or molecular targeted therapy is continued or restarted after PI are sparse. In the case series of Sassi et al. [2], corticosteroids were suggested as culprit drug for PI. After discontinuation of corticosteroids, restart of lapatinib-capecitabine, docetaxel-trastuzumab and vinorelbine respectively, was done safely. Also 5-fluorouracil and irinotecan were safely restarted after discontinuation of cetuximab for PI in another case [2]. In our second case, sunitinib was restarted and continued for two years without recurrence of PI.

Based on the available literature, it is hard to state whether restarting is safe or not. We recommend careful decision-making by outweighing the risks and benefits of rechallenge with the suspected culprit drug. Differential diagnosis with other possible benign causes of PI, like corticosteroids, pulmonary disease and infectious disease (as in our third case), is of utmost importance.

All the authors have contributed to concept, literature search, manuscript editing and review.

There was no source of funding for our research.

There are no conflicts of interest among the authors.