Schwannomas are uncommon disorders of peripheral nerves sheaths, presenting with particular neuropathic manifestations that are often misdiagnosed or undiagnosed. We offer a case report of a 36-year-old patient with an untypical schwannoma in the tibial nerve, causing long-lasting and increasingly exacerbated pain, misdiagnosed as a meniscus tear. The worsening symptoms, including hyperalgesia, allodynia and hypersensitivity, raised suspicion of malignancy. The patient underwent an ultrasound examination, where a compressive neuropathy was suspected. Finally, the presence of a large benign schwannoma was confirmed by magnetic resonance imaging. The tumour mass was excised and this gave way to a total and rapid relief of symptoms.

Schwannomas, which are also termed neurilemmomas in the current literature, are defined as benign peripheral nerve tumours which affect Schwann cells in cranial and spinal nerve sheaths [1, 2]. This condition is extremely unusual in the lower limb (less than 25% of all benign tumours) [3, 4], and it can be considered “singular” when it occurs in the tibial nerve (approximately 5% of all benign tumours) [4]. However, it is “extraordinary” when located in the popliteal fossa. These tumours tend to occur during middle age (20-50 years old) and very rarely initiate malign transformation [1,5]. The patient’s clinical manifestations can include both pain and neuropathic symptoms such as altered sensation, paresthesia or motor weakness [1, 2].

A 36-year-old male with no significant medical or surgical history visited Physiotherapy 15 years after first reporting pain in the right popliteal fossa after some days of skiing practice. At that time, it was classified as pain with non-traumatic etiology. The pain began insidiously and radiated into the anterior and posterior distal third of the thigh during combined flexion-rotation knee movements while reproducing skiing movements. The symptom was also elicited with palpation and compression manoeuvres on the popliteal fossa that the patient described as a local “jab”, but it was not painful at rest. The patient was first referred to an orthopaedist, who prescribed a simple x-ray and diagnosed the clinical manifestations as a degenerative meniscal tear affecting the lateral meniscus. After this first episode the patient continued experiencing both intermittent discomfort events in his normal daily life activities and increased pain in connection with higher physical demands. While he remained asymptomatic during physical activity (running or jogging), the pain worsened and became increasingly more intense just at the end of the activity and disappeared within the following 2-3 days. He gradually started to notice moderately increased tactile sensitivity (hypersensitivity) and tenderness to pressure, accompanied by a cramping sensation along the rear of the calf, reaching the mid-third of the leg, especially on the lateral side. The patient also reported a loss of knee motor function when severe manual compressions were applied on his popliteal fossa. Since 2019, the posterior knee became extremely sensitive, even to a light touch (allodynia), with exacerbated pain or hyperalgesia (Visual Analogue Scale VAS-10/10) when light pressure was applied on the central portion of the popliteal fossa. This was so strong that the patient could not spend more than 20 minutes sitting in a car. This restricting condition was associated with major functional impairment, placing him at risk of suffering falls as a consequence of lower-limb collapses which led him to seek medical advice.

Our clinical and physical knee examination did not reveal any significant abnormality. All ranges of motion and manual muscle tests were normal, and classic orthopaedic tests for the knee were negative for menisci, cruciate ligaments, collateral ligaments or patello-femoral injuries. Tinel’s test on the tibial nerve at the popliteal fossa evoked an unbearable, sharp and electric pain (VAS 10/10) that travelled across two thirds of the posterior calf, raising a suspicion of neuropathic injury. An ultrasound examination was performed on the popliteal fossa, revealing the existence of a homogeneous, hypoechogenic, well-differentiated soft tissue mass over and inside the posterior tibial nerve (slightly above the sciatic terminal subdivision) with posterior acoustic enhancement (Figures 1 and 2). The positive color Doppler signal confirmed the presence of a vascularised lesion which was compatible with a nerve tumour (Figure 3 and Video 1). The patient was referred to an orthopaedic surgeon, a specialist in tumour diseases, who ordered a Magnetic Resonance Imaging (MRI) with gadolinium contrast. The MRI corroborated the existence of an intermuscular 16x14x13 millimetre schwannoma in the centre of the tibial nerve (Figures 3-5). This encapsulated mass was isointense to muscle on T1 and presented with a central hypointense and a peripheral hyperintense rim signal in T2 (target sign).

After subsequent consultation with the orthopaedic surgeon, surgical excision was urgently programmed and performed with no adverse events. Further histopathological examination confirmed the initial diagnosis of large benign tibial nerve schwannoma (in comparison with the cross-sectional area of a normal tibial nerve at this level). Symptoms were drastically reduced after tumour removal and now the patient describes no pain or hypersensitivity. 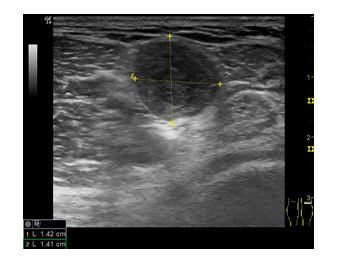 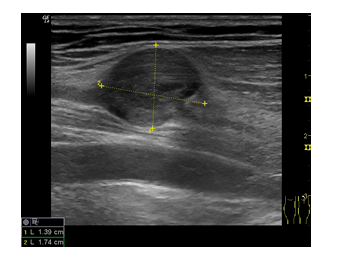 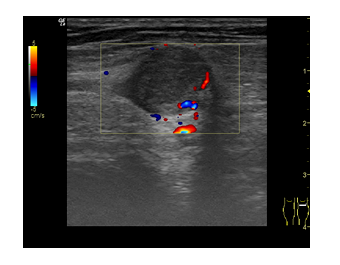 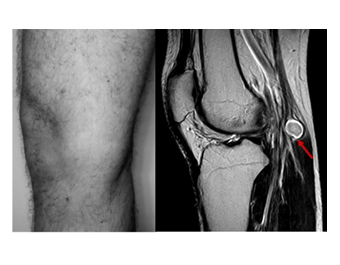 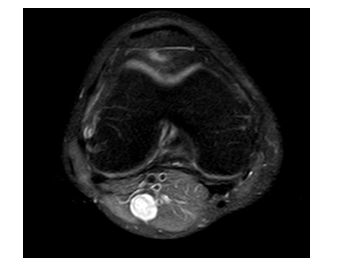 Although it is unusual, physical therapists are not exempt from the risk of facing red flags during their professional practice. Over the past two decades, the use of Rehabilitative Ultrasound Imaging (RUSI) has made it possible to refer multiple severe and malignant cases to appropriate healthcare professionals. There is wide evidence described in current literature about patient referrals to physical therapists with major pathologies that needed urgent care. This was the case of Mechelli et al. [6], whose patient with untypical low back pain was sent back to his physician with a high suspicion of malignancy. The existence of a 10-cm-diameter abdominal aortic aneurysm was radiologically confirmed and the patient finally underwent a surgical repair.

As Point of Care Ultrasound (POCUS) becomes to be a daily practice for clinicians, international meetings [7, 8] have accepted the use of ultrasound imaging in physical therapy, a fact that has resulted in early identification and medical/surgical treatment of many patients with underlying pathological diseases. Although unable to differentiate between schwannoma and other types of tumour such as neurofibrosarcomas, ultrasound imaging has proved to be a cost-effective and accessible tool for tumour localisation, but a positron emission tomography/computed tomography (PET/TC) and MRI must be used to make a final and accurate diagnosis [9-11]. In addition, as many of these benign tumours remain asymptomatic, delayed differential diagnoses together with symptomatic aggravation can be expected if they are not assessed very carefully [11], with only a 12% of patients diagnosed within the first year [12]. In 1992, Smith and Amis [13] published a patient case report showing an eight-year delay in the final diagnosis of neurilemmoma of distal tibial nerve, which was initially confused with a Morton neuroma of the first web space. Likewise, in the present case report the schwannoma was identified 15 years after the first clinical manifestations appeared. The neuropathic symptoms progression and a positive Tinnel sign in the popliteal fossa gave rise to a suspicion of a neurovascular disorder that required further examination and for this reason an ultrasound scan was performed.

Neuropathic pain in the popliteal fossa can be developed by a wide spectrum of compression etiologies. The most common causes of local neurovascular compression are the presence of Baker’s cysts, adventitial cysts of the popliteal artery, thrombophlebitic syndromes, synovial sarcomas, popliteal artery aneurysms and nerve entrapments [14, 15]. Nerve sheath tumours are very rare conditions, particularly in lower limb, since they represent 5% of all soft tissue tumours, but they can similarly result in neuropathic pain, which is typically misdiagnosed as lumbosacral radiculopathy [10].

Unlike neurofibromas, schwannomas tend to spread on the periphery of the nerve, and thereby do not invade neural tissue or provoke neuropathic symptoms unless compression of nerve fascicles occurs [10,13]. In some cases, the presence of schwannomas can be related to genetic syndromes known as neurofibromatosis type 2 (NF2) and schwannomatosis that lead to uncontrolled tumour development in nervous system [9, 16]. These conditions are associated with higher morbidity and early mortality from brainstem compression [16] with so varied clinical presentations that make it difficult to obtain an early diagnosis.

Moreover, although malignant transformation from benign tumours is considered to be rare [4, 11], the symptoms in this case made it necessary to excise the schwannoma, leading to the complete recovery of the patient. Literature considers excision as the treatment of choice in symptomatic scenarios [10] but there is no denying that iatrogenic events may appear during the surgical removal, becoming an important cause of postoperative neurological deficits as a consequence of damaging nerve fascicles, especially in cases of tumour enucleation [17].

The patient finally underwent surgery and neither postsurgical neuropathic pain nor functional impairment was referred after the surgical procedure. 12 months of follow-up confirmed the total recovery and the return to normal activity and patient’s previous sport practice.

No benefits or funds were obtained to support this study. The authors have no conflict of interests to declare. Given the fact that no intervention took place, ethical approval was not required. The patient’s informed consent and all image permissions were obtained and signed for the anonymous information to be published. This manuscript (including abstract) is an original work and has not been previously published or submitted to any other publication.

LL participated in the study design, drafted and wrote the final manuscript. MTG performed all the data collection as well as submitted the case report. SF was responsible for obtaining the radiological images and DP collaborated with LL to draft the text and provided the facilities and equipment to carry out the radiology imaging. All the authors read and approved the final manuscript.