Psychosis and Cannabis: Could a Hasty Diagnosis and Treatment of Schizophrenia be Harmful?

We describe a young male patient who questions his diagnosis of schizophrenia made 10 years ago, and whose clinical presentation and history seem in favour of cannabisinduced psychotic episodes. This case questions the risk of a hasty diagnosis when it comes to concomitant psychosis and cannabis use. This presentation raises medical, therapeutical, and ethical questions. With cannabis use rising globally, cases like this are bound to multiply. There are no evident clinical distinctions between psychosis such as schizophrenia, and cannabis-induced psychosis described in literature, nor evidence-based guidelines on the care patients should benefit from. Further research is therefore needed.

The drug market has been remarkably resilient despite the disruption caused by the COVID-19 pandemic and, in Europe, the most commonly tried drug is still cannabis (47.6 million males and 30.9 million females) [1]. The prevalence of European cannabis use is about five times that of other substances [1-2]. For public health however, it is now clear that the most psychoactive part of the cannabis (tetrahydrocannabinol=THC) can induce psychotic-like symptoms in healthy individuals [3]. In a meta-analysis, Marconi et al. [4] showed there was an association between the level of consumption of cannabis and psychosis; authors calculated an OR of 3.90 (95% CI 2.84 to 5.34) for the risk of schizophrenia and other psychosis-related outcomes among heavy cannabis users compared to nonusers. Thus, many studies consider cannabis use as a risk factor for the development of schizophrenia [4].

Current guidelines emphasized the importance of prompt treatment in psychotic episodes to reduce the duration of untreated psychosis [12]. Recommendations on duration of maintenance treatment vary from a minimum of one year, to at least two years for first-episode patients, and between two to five years for multi-episode patients. However, few recommendations exist on treatment of cannabis-induced psychosis.

A 32-year-old man consulted in our Schizophrenia Expert Center to reconsider his diagnostic of schizophrenia received ten years ago. Our team belongs to a French national network, set up by a scientific cooperation foundation in France, the FondaMental Foundation (www.fondation-fondamental.org). We use standardized and extensive clinical and neuropsychological batteries, with ethical principles for medical research involving humans (WMA, Declaration of Helsinki). All data were collected anonymously. A non-opposition form was signed.

The man was cooperating, and his current medical and social team supported him in this process. During the first consultation, he described three hospitalisations that occurred following psychotic episodes in year 0, year 3 and year 5 (See please figure 1). Each time, the subject presented delusions of persecution, ideas of reference and was agitated, but he has never expressed hallucinations. These episodes coincided with cannabis use. Symptoms were not mood congruent. The subject also described he started cannabis use at age 15 with friends, and never really stopped. His first memory of cannabis was of the smell, when he was 6 years old; the smell still had a very strong effect on him (the craving was still strong). Currently, he smoked a few joints of cannabis per year, and used CBD flower regularly. Finally, he detailed various treatments he benefitted from during the last ten years: risperidone, escitalopram, ariprazole, quetiapine, zuclopenthixol and clozapine. At the time of the consultation, he had a prescription for 50 mg of clozapine per day but explained he took 25 to 50 mg every few days, for its hypnotic effect. Exploring his childhood found no evidence of physical abuse, but emotional deprivation seemed obvious. His mother also had several drug addictions (heroine, alcohol), which probably explained his placement for a few years after his parents separated.

During clinical evaluation, the subject had a neat appearance; his speech volume, rhythm and tone were normal; he answered precisely and informatively. Emotional expression was appropriate to content. His thoughts were logical with no evidence of flight of ideas, nor loosening of associations. There was no evidence for delusional thoughts or mistrust, nor perceptual or sensory abnormalities. He did not show any difficulty concentrating or memorizing. Abstract reasoning seemed functional. So, even though the subject took clozapine at an ineffective dosage, the patient’s presentation would seem inappropriate with a diagnosis of schizophrenia, often associated with cognitive impairment, residual negative symptoms, and disorganisation.

Furthermore, the depth analysis of the subject’s clinical records revealed the hospitalisations always occurred in a context of cannabis use (Figure 1). Stress factors preceding these psychotic episodes were also identified (Figure1). Psychotic symptoms diminished rapidly during his first and third hospitalisation. The second hospitalisation was the longest, symptoms lasted longer, and several treatments were tried, resulting in a prescription of clozapine. In between hospitalisations, no positive symptoms or disorganisation were observed; absence of motivation and a form of apathy were occasionally described. The subject benefited from psychiatric follow-up, social assistance and protected employment and housing. In years 6-7, the diagnosis was first questioned, and clozapine was progressively diminished, and stopped (year 8) with no symptomatic recurrence until the third and last hospitalisation at the end of the year, following stressful life events and recurrence of cannabis use. Since then, despite the ineffective use of clozapine (25-50 mg of clozapine every few days) the subject has not presented positive or negative symptoms, nor signs of disorganization. The clinical history was therefore also inappropriate with the diagnosis of schizophrenia. 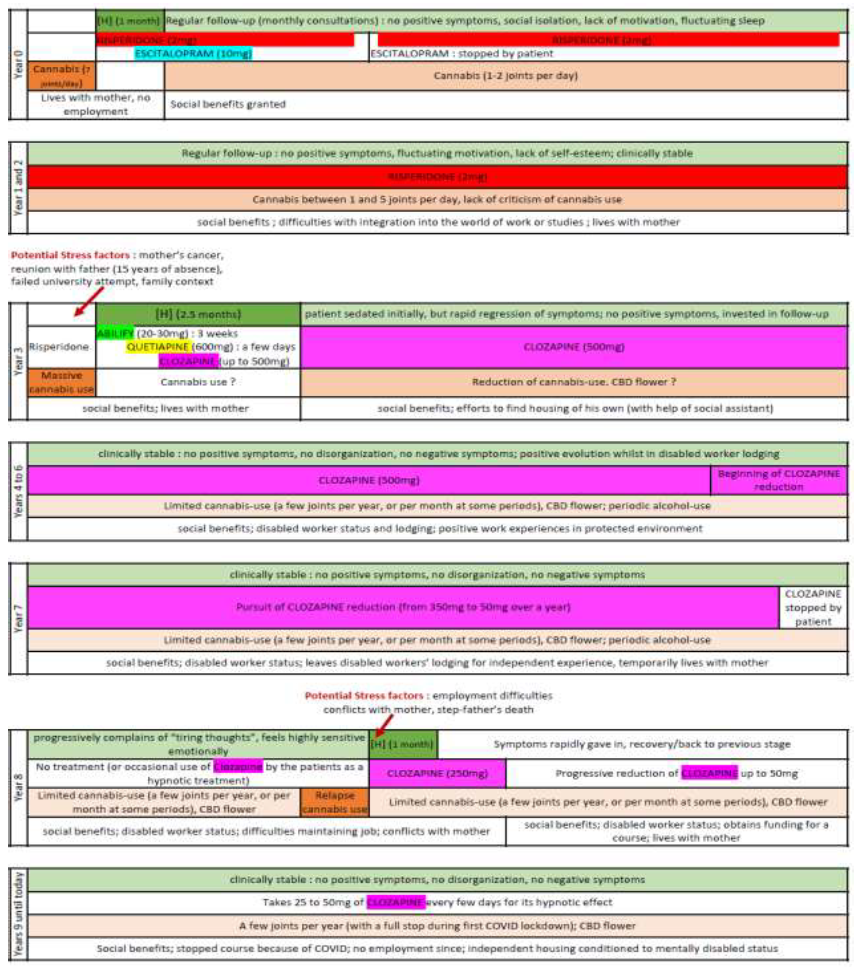 [H] = hospitalisation : symptoms at the time of hospitalisations : delusions of persecution, ideas of reference, agitation. Symptoms were not mood congruent.

Complementary clinical explorations found no present symptoms of schizophrenia. Indeed, the score of the Positive and Negative Syndrome Scale (PANSS) [13] was not in favour of schizophrenic symptoms: positive PANSS subscale was of 10, negative PANSS subscale was of 7 and total score was of 37. According to Leucht et al [14], being considered “mildly ill” according to the CGI corresponds to a PANSS’ score of 58. Furthermore, Calgary Depression Scale for Schizophrenia [15] was in favour of absence of depressive symptoms (score=2).

About neuropsychological assessment, no cognitive impairment was detected. The estimated intellectual quotient (according to Denney) was of 114. Executive functions, abstract thinking, memory functions, social cognition and intellectual abilities were within the range of normal, if not, slightly higher than standard. Only planning and organising capacities were slightly lower than standard. In the same way, initial brain imagery and biology provided no arguments in favour of a neurological, metabolic, infectious or any other explanation for the observed symptoms.

Consequently, the clinical presentation and history therefore seemed to be in favour of several cannabis-induced psychotic episodes.

This clinical case highlights the importance of a cautious diagnosis of schizophrenia when there is a cannabis use in the story of a subject. Questions are closely intertwined concerning diagnoses and medical treatment, but also several ethical problems. The existence of a link between cannabis and psychosis is common knowledge, but the nature of this link remains unclear. Some studies have suggested there could be a common genetic baggage [7-8], while others insist on a correlation between the level of cannabis use and the risk of psychosis [3], or still others suggest cannabis use is a risk factor for psychosis [9], and even a risk for early onset of schizophrenia [16]. Moreover, schizophrenia is frequently associated with cannabis-use and there seems to be a high risk of conversion to schizophrenia after a cannabis-induced psychosis. However, this case-report showed that cannabis-induces psychotic episodes could also probably occur repetitively, without necessarily converting to schizophrenia. The distinction between schizophrenia and cannabis-induced disorders is not always so obvious, and our experience is an invitation to precautious diagnosis of schizophrenia when cannabis use is associated.

This clinical experience also highlights the interest of a multidisciplinary approach, in particular around psychosis and addictions. In our case, the importance of diagnosing and treating addiction was put in the background because the patient defeated it and had found illegal income, which he was hiding, through the drug environment.

Furthermore, the case report underlines the semiological overlap between clinical characteristics of psychotic episodes in schizophrenia, with cannabis abuse or dependence, and cannabis-induced psychosis. In-depth analysis and close attention to clinical symptoms could be necessary to pinpoint the exact diagnosis. In addition, to distinguish schizophrenia associated with cannabis use, and cannabis-induced psychosis, further explorations seem necessary. Indeed, clinical characteristics are currently described as very similar, further research could be helpful to identify discriminating factors.

Finally, this case also raises many ethical questions. Firstly, concerning the subject, consequences of invalidating the diagnosis of schizophrenia would have many repercussions for him in his identity as a patient and in his whole life. The subject could lose his income from social benefits, and his housing which is granted to him thanks to the recognition of mental illness. This questions a hasty diagnosis, a risk of “over-medicalisation”, which seems to have locked the patient in a system with much assistance he is struggling to get rid of.

Secondly, for doctors, this case calls for caution with the need to take time for diagnosing and to try to perform a detailed clinical analysis. Indeed in the case, it seems that the subject’s symptoms were often interpreted to contribute to the diagnosis of schizophrenia. The advanced evaluation gave the time for detailed investigation, and fine analysis of the described symptoms. This is a reminder of the necessary watchfulness when evaluating patients and the interest of questioning diagnoses that have been established.

Lastly for society in France, this case leads to thinking in such a diagnosis opens rights to social benefits. Doctors therefore have a delicate responsibility towards society. To some extent, a wrongful diagnosis could be considered a prejudice for society. In this current case, the patient even suggested that during a certain period, the benefits he received financed his cannabis use. Doctors therefore have a responsibility towards society to make cautious diagnoses.

This case-report shows the importance of a cautious diagnosis when it comes to concomitant psychosis and cannabis use. The need for further research in this area is evident. Cannabis use seems to be rising all around the world. In many countries, its use is trivialized, in some, it is even, though sometimes controversially, legalised. Cases like this one are thus likely to become more frequent. The need for better distinction between cannabis-induced psychosis and schizophrenia is important to avoid misdiagnosis and provide the best care possible for patients. Guidelines for cannabis-induced psychosis need to see the light of day to provide suitable care in these cases and help medical decisions. Indeed, these diagnoses have significant consequences, which affect patients’ lives, but also impact society. Medical, ethical, and societal issues are at stake, which reinforces the need for further research.

The authors also wish to thank the Direction of the hospital in the dynamics of research of the unit, in particular Mrs Véronique Bourrachot, Director of the psychiatric establishment, Mrs Giovanna Venturi-Maestri, President of the Medical Community and Mr Mustapha Bensaadi, Head of the Medical Pole. Finally, the authors wish to thank the patient, for his efforts and his sincerity, throughout the evaluation.

No special funding was received.

Disclosure and Conflict of Interests