Reconstruction of Upper Lid in a Case of Meibomian Gland Carcinoma

The sebaceous gland carcinoma is a very rare highly malignant tumour of the eyelid arising from sebaceous glands of the eyelid, such as meibomian glands, glands of Zeis and caruncle. The tumour is more commonly seen in elderly females and more commonly involves the upper lid. We present a rare case of meibomian gland carcinoma of the right upper eyelid in an 80- year-old male who came with a painless slow-growing swelling of the right upper eyelid for the last ten months. There was no enlarged preauricular or submandibular lymph gland. The tumour was excised and the upper lid was reconstructed by Tenzel’s flap procedure and lateral canthotomy. The excised tumour was sent for histopathological examination. Histopathological examination confirmed adenocarcinoma of the meibomian gland.

The sebaceous gland carcinoma is a very rare malignant neoplasm primarily found in the area of the eyelid most of these cases originate in the tarsal meibomian glands. These are usually considered the second most common eyelid malignancy, first being basal cell carcinoma. These tumours are slow-growing and simulate to a number of benign pathological conditions like chalazion, papilloma, seborrheic keratitis, keratoacanthoma, etc. A delay in diagnosis may lead to improper management and increased morbidity and mortality. Here we describe a case of primary meibomian gland carcinoma and its surgical approach.

An eighty years old male patient presented with a large swelling in the right upper lid. The swelling was gradually increasing in size for the last ten months painlessly. The patient was unable to open his lid due to the weight of the tumour mass. Two months back the patient consulted an eye surgeon in another hospital where also he was advised excision of the tumour, but due to the prevalence of corona infection, they did not follow the advice. Now the size has increased more. On examination, there was a firm lobular pinkish mass in the tarsal conjunctiva of the right upper lid. The skin overlying the tumour appeared free. Size of the tumour was 20mm x 16mm involving the lateral and central part of the eyelid. There was no involvement of the eyeball and clinically there was no palpable preauricular or submandibular lymph gland. Part of his medical examination was within normal limits.

The patient was operated under general anaesthesia. After antiseptic dressing and draping the tumour mass along with 4 mm of normal tissue margin on medial, lateral and above was marked with gentian violet. Two stay sutures were given at the upper lid margin and a lid spatula was placed under the upper lid and the lid drawn downward with the help of stay sutures. The tumour was excised along the marked area. The excision included full thickness of the lid. The gap was about 28 mm. On approximating the cut ends with forceps there was a gap of 8 mm. We decided to reconstruct the upper lid by doing lateral canthotomy and preparing a Tenzel's flap. A semicircular incision of 16 mm diameter was made downward from the lateral canthus and skin and orbicularis oculi muscle undermined to prepare the flap. Now the cut ends were approximated and sutured. The first suture was given at the lid margin. Then the cut ends of tarsal plates with a superficial part of the conjunctiva sutured with 6-0 vicryl. Then the levator muscle was sutured with the upper part of tarsal plates with 6-0 vicryl. Next, the skin and the orbicularis were sutured with 6-0 silk. The incision at the flap area was closed with 6-0 silk. 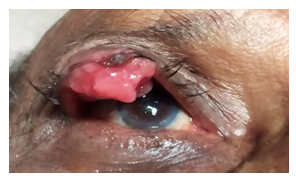 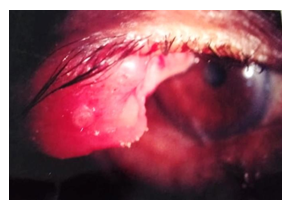 Figure 3: The enlarged view of the tumour mass. 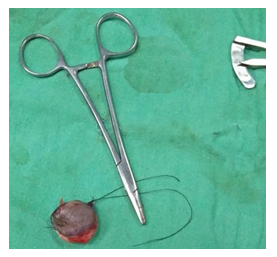 Figure 4: Full-thickness excision of the tumour.

We preferred this procedure to Cutler Beard as it is a one-stage procedure and we could suture the levator to the tarsal plate so the chance of lid movement is better. The result was very much satisfactory. The excised material was sent for histopathological examination. The report showed necrotising comedonecrosis, the focal papillary pattern of neoplastic cells of increased nucleocytoplasmic ratio, hyperchromatic pleomorphic nuclei. There was increased mitosis. Overlying epidermis was unremarkable. Deep resected margins were free of tumour. Impression was Adenocarcinoma of the meibomian gland.

Meibomian glands are modified sebaceous glands. They are present in the tarsal plate and arranged vertically. They are about 30-40 in the upper lid. Sebaceous gland carcinoma of lid most commonly arises from meibomian glands (51-70%). It is a very slow-growing tumour and commonly found in the elderly population with the female predisposition. Upper lid lesions are 2 to 3 times more common as the number of the meibomian glands are more in the upper lid. Two important distinguishing features of this tumour from other periocular malignancy are

Meibomian gland carcinoma can spread through direct, lymphatic, haematogenous routes. Most common sites of spread are orbit, Preauricular nodes and parotid glands. Less common sites are cervical nodes, lung, pleura, liver, brain, pericardium, lips, ethmoid sinus, skull. Therapy of choice is primarily surgical, Radiation therapy can be an alternative approach to surgical excision and may be considered as an adjunct to local surgery also. The various surgical procedure usually employed are excision and direct suturing of the margins in layers when the tumour size is small. But when the tumour size is large full-thickness excision of lid including the tumour mass with 4-6 mm of free margin is excised. The reconstruction is done by Cutler beard procedure, Tenzels flap procedure or by using tarsoconjunctival graft from the other eye. We did Tenzel’s flap procedure along with canthotomy as it is simple, one- stage procedure, the residual tarsal plates can be utilised effectively and the levator muscle can be sutured to the upper part of tarsal plate so that adequate lid movement is possible postoperatively. One month after operation both eyes looked similar and lid movement became normal.