Renal Involvement of Sarcoidosis: Case Series and Review of the Literature

#Both the authors contributed equally

Sarcoidosis is a disease characterized by granulomatous inflammation potentially affecting multiple organ systems. Although it can affect any organ, lungs, lymph nodes, skin and eyes are most commonly involved. Renal sarcoidosis, although rare, remains a challenging clinical issue requiring mandatory treatment, given the risk of developing renal failure. Taking into consideration the rarity of the disease, data regarding its diagnosis and treatment are scarce. This case series describes seven cases of sarcoidosis with predominantly renal manifestations, and moreover provides a review of the current literature on renal sarcoidosis.

Sarcoidosis is a multisystem disorder of unknown cause that primarily affects the lung and lymphatic system of the body [1]. It has been termed as ‘‘the great pretender’’ due to the ability to mimic other diseases [2]. The granulomatous inflammation of sarcoidosis can involve any organ of the body and sometimes extrapulmonary sarcoidosis may be the major manifestation of the disease that can dictate the treatment and prognosis [3]. Extrapulmonary sarcoidosis is common, with variable prevalence among populations and it is almost always found with concomitant thoracic involvement [3]. However, isolated extrathoracic sarcoidosis is not so frequent [3]. In this article we present seven cases of sarcoidosis with major renal involvement and proceed to a literature review. 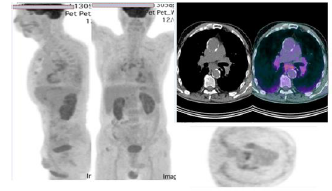 A 60-year-old white male presented with hypercalcemia and acute kidney injury along with malaise and fatigue over the past 10 months. He had a past medical history of chronic kidney disease (baseline serum creatinine of 4 mg/dl), hypertension, gouty arthritis, hypothyroidism and symmetric sensorineural hearing loss. He also presented a new onset macular rash in the trunk (Figure 4). Blood tests revealed anaemia, worsening kidney function (sCr=5.1 mg/dl), hypercalcaemia (ionized calcium 7.1 g/dl), hypercalciuria, increased serum sACE and ESR (Table 1). Serum immunology was negative. The urine sediment showed numerous calcium oxalate crystals, WBC and casts. The renal ultrasound revealed bilateral nephrocalcinosis along with thinning and hyperechogenicity of the renal cortex. Computed tomography showed several calcified lymph nodes in the thorax and abdomen, micronodular lesions of lung parenchyma as well as splenomegaly and nephrolithiasis. A bronchoscopy excluded malignancy or infections but the primary diagnosis was still missing (BAL was equivocal with 7% lymphocytes and CD4+/CD8+ ratio 4.2). Kidney biopsy showed nephrocalcinosis with calcium phosphate deposits in the tubular lumens and interstitium, rupture of tubular basement membranes and chronic interstitial nephritis (Figure 5, suppl Table 1). Considering the above clinical picture, the patient was diagnosed with sarcoidosis affecting the lungs, kidneys and skin. He was managed with intensive hydration for hypercalcemia and long-term steroid treatment resulting in significant improvement (suppl Table 2).

Figure 4: (A) Several well circumscribed macular skin lesions of the trunk. (B) a closer view of the lesions.

Table 1: Main laboratory results on admission before treatment for cases 1-7.

A 61-year-old white male was admitted to the Nephrology department due to deteriorating renal function and hypertensive urgency. He was an active smoker, obese with diabetes mellitus for 25 years treated with gliclazide. He also had hypertension and dyslipidaemia. Three months ago, he suffered an ischaemic stroke with right ataxic hemiparesis, hypertensive crisis and acute kidney injury, that all resolved before discharge from the hospital. Clinical evaluation was significant for bilateral pedal oedema and right calf erythema nodosum. Retinoscopy and heart ultrasound were unremarkable. Laboratory tests were notable for anaemia, acute kidney injury, hypercalcaemia, low iPTH and elevated ESR (Table 1). A QuantiFERON-TB Gold (QFT) blood test was negative. Kidney biopsy showed interstitial nephritis with swarming non-necrotizing granulomas comprising of epithelioid histiocytes, multinuclear gigantocytes and lymphocytes. Calcium phosphate crystals where seen into the tubular lumens (Figure 6, suppl Table 1). Ziehl-Nielsen histochemical stain of the kidney tissue was negative. The above findings were indicative of renal sarcoidosis. The patient was treated with steroids and several anti-hypertensive drugs. Over the following months his renal function improved while iPTH and calcium levels normalized (suppl Table 2).

A 80-year-old white female with a 3 years history of lung sarcoidosis on steroid therapy, bronchodilators and long term oxygen therapy was referred to the Nephrology department due to acute pedal edema combined with purpuric rash, symmetric polyarthritis and heavy proteinuria (7.5 gr/24hr), following a lower respiratory tract infection. Before admission, she already had a pulse of steroids resulting in significant improvement of polyarthritis and purpuric rash. Blood tests were significant for leucocytosis, anaemia and hypoalbuminaemia (2.7 mg/dl). Immunological tests and serum creatinine were normal. Urine sediment showed plenty of dysmorphic erythrocytes and red blood cell (RBC) casts. A repeat 24-hour urine protein was already reduced to 3.8 gr (Table 1). A kidney biopsy was consistent with IgA nephropathy with diffuse mesangial and intracapillary hypercellularity as well as two foci of necrosis associated with cellular crescents (suppl Table 1).

Considering the above findings the diagnosis of IgA vasculitis (Henoch-Schönlein purpura) associated with sarcoidosis, was made. An angiotensin converting enzyme inhibitor and diuretics were added, whereas steroid treatment with appropriate tapering was continued. Four months later, proteinuria regressed (urinary protein/creatinine ratio of 0.5 g/g) and serum creatinine stabilized (suppl Table 2). 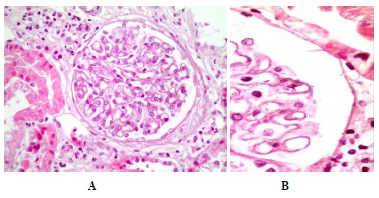 Figure 7: Membranous Nephropathy. Mild or moderate thickening of the glomerulal basement membranes (a) and small subepithelial spikes (b). 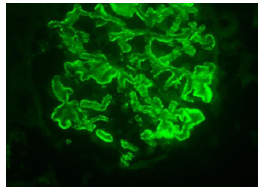 A 65-year-old white male, never smoker, presented with malaise and weight loss of 15 kgr over the previous year. His past medical history included diabetes mellitus type II and atrial fibrillation diagnosed 25 years ago. Before admission, his general practitioner detected worsening kidney function (creatinine 4.1 mg/dl), along with hypercalcaemia (sCa=12.4 mg/dl), hypercalciuria and increased sACE. Urine sendiment was active with WBC and epithelial casts. Abdominal ultrasound was remarkable only for splenomegaly (16.2 cm). Cardiac studies revealed a mild reduction of left ventricular ejection fraction (LVEF) of 55%, diastolic dysfunction, a mild pericardial effusion, and atrial fibrillation. Pulmonary function tests showed a restrictive pattern along with marginally reduced diffusion capacity. Chest and abdomen CT showed generalised lymphadenopathy and micronodular lesions for which he underwent bronchoscopy and lymph node biopsy. Bronchoscopy was unremarkable and BAL showed lymphocytosis of 39% with a CD4+/CD8+ ratio of 37. BAL cultures and cytology were negative. Transbronchial needle aspiration of mediastinal lymph nodes showed non-necrotizing granulomatous inflammation consistent with sarcoidosis. The patient refused to undergo a kidney biopsy. He was initially managed with intravenous fluids for hypercalcemia and a course of corticosteroids with marked improvement of kidney function (suppl Table 2).

Sarcoidosis is a multisystem granulomatous disease of unknown cause which can involve any organ [4-7]. The diagnosis of sarcoidosis is established when clinico-radiological findings are supported by histological evidence of noncaseating epithelioid cell granulomas [1]. Although lung is the most commonly affected organ, extrapulmonary sarcoidosis is common and is usually detected with concomitant lung involvement [3]. A recent study showed that non- pulmonary sarcoidosis is more common in white patients and women with the skin being the most commonly affected organ [8].

Renal involvement in sarcoidosis varies greatly among different studies from less than 1% [9] to 48% [10]. Various renal manifestations of sarcoidosis have been described [11], including nephrocalcinosis (5%), nephrolithiasis (4%), interstitial nephritis with or without granulomas (20%), and rarely glomerulopathies and obstructive uropathy [12]. Hypercalcemia (10-20%) and hypercalciuria (50%) are sometimes considered separate entities from renal sarcoidosis but comprise the most important cause of (reversible) renal dysfunction.

The diagnosis of renal sarcoidosis is made by exclusion of other possible renal diseases and, whenever possible, with a renal biopsy to obtain histopathologic confirmation. However we should bear in mind that renal sarcoidosis can be focal in nature and characteristic lesions can be missed in a small-needle core biopsy. The absence of kidney biopsy findings characteristic of sarcoidosis does not exclude the possibility of kidney involvement [15].

In our series common findings included fatigue, weight loss, anaemia, hypercalcaemia, hypercalciuria and kidney injury that regressed after appropriate treatment. It is well known that interstitial nephritis is associated with more severe anaemia as compared to other kidney pathologies. Hypercalcaemia was also common with the exception of two patients with sarcoidosis associated glomerular disease (MN and IgA vacsulitis) without interstitial nephritis and with normal sACE.

Treatment is always required for renal manifestations of sarcoidosis given the risk of progressive kidney dysfunction. In isolated hypercalciuria, treatment may involve reduction of calcium intake, increased fluid intake and avoidance of sun. Corticosteroids are the cornerstone of therapy even if there is no standardized protocol for dose or duration of treatment. A treatment regime starting with prednisone 0.5-1 mg/kg followed by gradual tapering to 5 mg/day for months 6-12, has exhibited good results in improving renal function. Usually there is improvement in renal function with treatment, although complete normalization of creatinine may not occur. Second-line treatments include azathioprine, mycophenolate mofetil, infliximab whereas experimental therapies (thalidomide, hydroxychloroquine, rituximab, pentoxifylline) have also been proposed [16]. There are four major prognostic factors with influence on renal outcome: serum creatinine levels at the time of diagnosis, the histological type of renal sarcoidosis, the degree of tubulo-interstitial fibrosis and the response to treatment after 1 month [13, 17].

It should be emphasized that renal disease may be the initial clinical manifestation of sarcoidosis. Clinicians should pay attention to the protean nature of kidney involvement because the management of the disease may be modified. The early implication of the nephrologist and the timing of renal biopsy are crucial in order to prevent irreversible damage.