Esophageal cancer rarely metastasizes to the kidney. The metastatic organs known more commonly are the liver, lung, and bone. Here, we report a case of a 58 year-old male, who had been diagnosed with squamous cell carcinoma of the esophagus 22 months ago, developed renal metastasis. He subsequently received nephrectomy and adjuvant chemotherapy. We also reviewed similar cases in the literature. This case report could alert physicians caring patients of esophageal carcinoma to pay more attention to the less common renal metastasis.

Esophageal cancer is the 8th commonest cancer worldwide, with an estimated 456,000 new cases in 2012 (3.2% of the total), and the 6th commonest cause of death from cancer with an estimated 400,000 died in the same year (4.9% of the total) [1]. In Taiwan, esophageal cancer is in 2015 the 9th leading cause of death [2]. During the period from 2001 to 2007, the overall 5-year survival rate for esophageal cancer is 19% [3]. Once distant metastasis occurs, the overall 5-year survival rate drops below 5%. The common sites of metastasis are in descending order, the liver, lung,

bone and adrenal gland. Metastasis to kidney is extremely rare for esophageal carcinoma, with only a handful of cases reported so far [4-19]. We present here a case of esophageal squamous cell carcinoma that has metastasized to one kidney and we also reviewed the relevant literature.

A 58-year-old male had been in his normal health before December, 2014, a time when he experienced difficulty in swallowing, poor appetite and body weight loss (10 kg in two months). A month later, the symptoms progressed and he developed nausea, vomiting after eating.Consequently, he came to our hospital for help. Panendoscopic findings revealed an esophageal mass. The biopsy result supported the diagnosis of squamous cell carcinoma. Then on January 30th, 2015, he started the first course of neoadjuvant concurrent chemoradiotherapy (chemotherapy with Cisplatin, 5-FU and radiotherapy with 3600cGy, or CCRT). By March, 2015, after finishing two courses of CCRT, partial remission was achieved. On April 20th, 2015, he underwent robotic-assisted thoracoscopic esophagectomy. The histopathological finding was squamous cell carcinoma, moderately differentiated. Tumor had invaded to the adventitia including one lymph node. The pathological staging was pT3N1M0. After surgery, he did not continue chemotherapy due to poor general conditions and his reluctance to receive more treatment. In November, 2016, he again visited the Urology clinic because of gross hematuria occurring over the past three weeks, and he had accompanied flank pain on the right side. An abdominal computed tomography (CT) showed an infiltrative lesion over the right upper pole kidney with suprarenal involvement (Figure 1). Ureteroscopic biopsy of the upper calyx of right kidney was performed and results were negative for malignancy. CT guided biopsy was then performed and histopathology showed an invasive carcinoma with squamous differentiation. He received a regimen of three times adjuvant chemotherapy under the suspicion of metastatic esophageal squamous cell carcinoma. Follow-up CT scans showed right renal tumor that was further enlarged in size. Right radical nephrectomy and lymphadenectomy were performed in March, 2017. Histopathological findings confirmed squamous cell carcinoma of invading the right kidney and ureter, moderately to poorly differentiated (Figure 2). The margin was uninvolved by invasive carcinoma and the pathological staging was pT4N0. The urothelium was intact without tumor invasion. Therefore, we judged that the renal tumor was metastatic. After the surgery, he received systemic treatment with Bortezomib (Velcade) weekly and Leucovorin (HDFL) biweekly for to control distant metastasis. 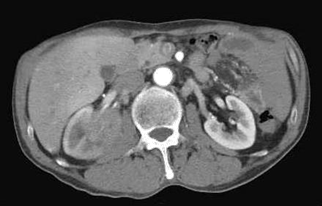 Figure 1: An Axial computed tomography (CT) image of the patient showing a poor enhancing infiltrating lesion over the right upper pole of his kidney(arterial phase). 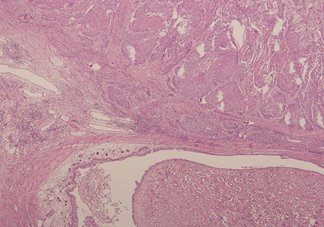 Esophageal cancer is notoriously aggressive in nature, spreading by a variety of pathways including direct extension, lymphatic spread and hematogenous metastasis. Its prognosis largely depends on the extent of local invasion as well as the spread to regional and distant structures [20]. We reviewed reported cases of esophageal cancer with metastasis to kidney and summarized them in Table 1. We found a total of 18 cases in the literature, with the first one reported in 1987 by Pollack et al. Among the 18 patients, the overwhelming majority of them (n=17) have squamous cell carcinoma, and only one case is adenocarcinoma. Also, all patients except one are male. Most of the patients (n=16) are from populations in Asia(including Chinese, Japanese and Korean ethnicity), while only two patients are of French. The overall survival time duration after renal metastasis ranges from two months to over 9 years. According to one geodemographic study on esophageal cancer, the squamous cell carcinoma is found more prevalent in Asia than in Western countries, where the adenocarcinoma is on the contrary more common [20]. Additionally, adenocarcinoma in general has a prognosis better than squamous cell carcinoma. Siewert et al. reported a level 40% on the 10-year overall survival of patients with Barrett’s-associated cancer, whereas that of squamous cell carcinoma is 20% [21]. It is worth noting that the only case of adenocarcinoma is of Chinese ethnicity and this patient has also the longest survival after renal metastasis. From the reviewed cases, one is tempted to speculate that squamous cell carcinoma of the esophagus has a greater tendency than the adenocarcinoma to metastasize to the kidney. This speculation is consistent with the present case which is also a squamous cell carcinoma. The common sites of distant recurrence of esophagus cancer are, in the descending order of frequency: lymph node (45%), liver (35%), lung (20%), cervical/supraclavicular lymph node (18%), bone (10%), adrenal gland (5%), peritoneum (2%), and brain (1.5%) [22]. Kidney metastasis is rarely detected clinically and is most often only detected at autopsy. Anderson et al presented the autopsy of 79 patients with esophageal carcinoma, and found that the common metastatic sites are lymph node (73%), lung (52%), and liver (47%), with kidney accounting for only 13% [23]. The discordance of clinical and autopsy findings may be due to the fact that the occurrence of renal metastasis is often asymptomatic. In one study on kidney metastasis patients, only 33% of then have showed the symptom of microscopic hematuria, and 15% gross hematuria [24]. Some patients may have proteinuria. Renal failure is rare unless accompanied by obstructive uropathy [4]. The diagnosis of renal metastasis is therefore often found unecpected on regular examinations. In our literature review of renal metastasis, 7 of the 18 reported cases are asymptomatic; 10 are presented with hematuria or flank pain and only complains of general weakness and body weight loss. Therefore, for early dection, it is necessary to screen closely renal metastasis in patients with esophageal cancer [18]. There is currently no consensus regarding the treatment of esophageal cancer with renal metastasis due to the scarcity of cases. Related to this issue, we reviewed the 2017 NCCN guidelines of esophageal cancer [25]. For metastatic squamous cell carcinoma of esophageal cancer, systemic treatment is recommended if the patient has a good performance status (Karnofsky performance score > 60% or ECOG performance below 2). For adenocarcinoma of esophageal cancer, the HER2 test should be done and Trastuzumab should be added to chemotherapy for HER2 overexpressing metastatic adenocarcinoma. However, based on imaging study alone, it is difficult to differentiate whether the tumor is primary transitional cell carcinoma of renal pelvis or metastatic carcinoma. Both metastatic carcinoma of kidney and primary advanced stage of transitional cell carcinoma could appear as infiltrating tumor with renal parenchyma invasion [26, 27]. Therefore, nephrectomy is often done in such cases. Of the 18 cases reviewed, all patients except one have received nephrectomy. Once the metastatic carcinoma has been confirmed, chemotherapy should be started.

All contributing authors declare no conflicts of interest