Retroperitoneal Appendicitis around the Ureter: A Rare Case Reports

Some appendicitis with the appendix in rare localization shows atypical presentations, leading to diagnostic difficulties. We firstly report one case of retroperitoneal appendicitis encroaching on the ureter. The diagnosis was interpreted as ureter cancer by the MRU (Magnetic Resonance Urography) and PET (Positron Emission Computed Tomography), whereas the intraoperative finding and pathological examination finally confirmed that the hydronephrosis was caused by the retroperitoneal appendicitis. Herein, the case report we presented will provide a demonstration for the subsequent differential diagnosis of ectopic appendicitis.

A 54-year-old male patient was admitted to the urology department with paroxysmal pain in the right flank. The patient had no history of medication and surgery. No abdominal pain or rebound pain was found by physical examinations. The MRU demonstrated a 2.0 cm × 2.8cm × 3.5cm mass with unclear boundary around the right ureter at the L4 level, and the ipsilateral hydronephrosis with pelvic dilation about 3cm, the mass was considered as ureteral carcinoma (Figure 1). The PET revealed an irregular soft tissue with clearly visible increased metabolism at the L3-L4 level, and the ipsilateral hydronephrosis with pelvic dilation about 3.2 cm, the mass was also considered as ureteral cancer (Figure 2). The ureteroscopy examination showed that the ureteral lumen was smooth and there was a stenosis about 3cm in length in the ureter. The ureteroscope could pass through the stenosis and enter the pelvic. The ureteroscopy examination suggested that the stenosis was caused by oppression outside of the ureter. Intraoperative findings displayed that there was a hard, non-enveloped 4 cm × 3 cm mass down to the appendix which located in the retroperitoneum, the mass is closed to the peritoneum and around the upper ureter. The pathological examination revealed that the mass consisted of hyperplastic fibrous tissue, infiltrated lymphocytes and plasma cells (Figure 3). Thus, the mass was confirmed as inflammatory mass of appendicitis. 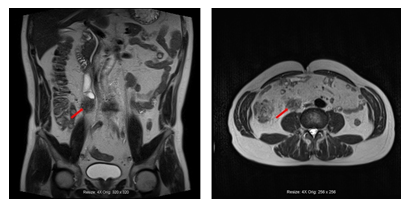 Figure 1: The mass around the right ureter with ipsilateral hydronephrosis in MRU. The red arrow revealed the localization of the mass. 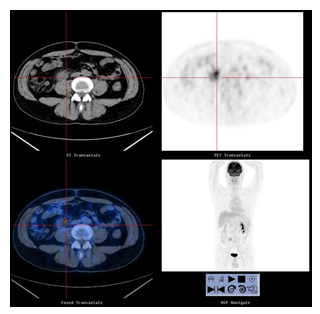 Figure 2: The mass around the right ureter with increased metabolism in PET.

During the exploratory laparotomy, the mass was found around the ureter and continuous to the retroperitoneal appendix, so the mass was reasoned from the appendix. After separating the mass and protecting the ureter carefully, pathological examination confirmed the mass as inflammatory tissue originated from the infected appendix. The therapy of ureteral cancer usually requires the resection of the ureter or the resection of the ipsilateral kidney, the whole ureter and a part of bladder. Precise diagnosis is needed to differentiate a retroperitoneal appendicitis around the ureter, since the symptoms seem to be the same, but the therapy is totally different. Patients with appendicitis and ureter cancer suffer from differently therapeutic procedure and clinical result. The retroperitoneal appendicitis around the ureter and ureter cancer should be carefully distinguished due to similar result of medical imaging and in absence of specific symptoms. The pre-operatively pathological exam is useful for the differential diagnosis.

This study protocol was reviewed and approved by Wuhan Union hospital, written informed consent for publication of their clinical details and clinical images was obtained from the patient.

The author reports no conflicts of interest in this work.

There is no funding source.

J.W, F.D, contributed to acquisition and analysis of data, and preparation of manuscript. XM. L analyzed the PET and MRI data. XP.Z, HG.L and W.J diagnosed the surgical sample, wrote the manuscript and gave final approval of the version to be published. All authors read and approved the final manuscript.

The datasets used during the current study are available from the corresponding author on reasonable request.