Allergic bronchopulmonary aspergillosis (ABPA) is an abnormal immune response (hyper-sensitivity) mounted against Aspergillus fumigatus in predisposed immunocompetent hosts. This entity is commonly seen in individuals with bronchial asthma and rarely in cystic fibrosis. Serological and radiological tests help to confirm the diagnosis. High resolution computed tomography (HRCT) is the radiological modality of choice for investigating ABPA subjects. The subjects with ABPA may present variably with no HRCT abnormalities, bronchiectasis, high attenuation mucus (HAM) and chronic fibrotic lung changes. The presence of HAM represents immunological severity and also indicates higher chances of relapse. HAM is pathognomonic for ABPA. HRCT findings of ABPA are reviewed in this article.

Allergic bronchopulmonary aspergillosis (ABPA) is a dysregulated immune response (hyper-sensitivity reaction) mounted towards the fungi called Aspergillus fumigatus affecting the lungs which may manifest in form of pulmonary infiltrates and bronchiectasis [1]. Pulmonary aspergillosis has varied manifestations such as allergic bronchopulmonary aspergillosis (ABPA), aspergilloma (mycetoma), semi-invasive and invasive aspergillosis, depending upon the general immunity of the host as well as the local pulmonary immunity at the time of exposure to the fungus [1]. Impaired mucosal function with colonization of Aspergillus fumigatus can lead to a Type 1 hypersensitivity response resulting in ABPA in individuals who are likely to be atopic and immunocompetent [2-4]. ABPA is mostly seen in individuals with predisposing conditions like bronchial asthma and cystic fibrois (smaller proportion) [4, 5]. Denning et al, reported the worldwide prevalence of 4.3 million ABPA subjects in a cohort of 193 million asthmatic patients [13]. The patients classically presents with uncontrolled asthma, productive cough, hemoptysis, brownish mucoid plugs in sputum, wheeze and fever [1]. The environmental as well as polygenic factors are attributed to the patho-mechanisms triggering the pulmonary manifestation of ABPA on exposure to the Aspergillus spores [11]. Destruction of bronchial walls is attributed to the necrotizing, granulomatous inflammatory changes [3]. Establishment of ABPA diagnosis in a predisposed individual requires fulfilment of a set of an obligatory criteria including significantly reactive aspergillus skin test/ raised IgE levels against fungus (A Fumigatus) and raised total IgE levels with presence of other radiological and serological parameters [11]. Chest radiograph and computed tomography are the commonly used radiological modalities to assess the early and the late changes seen in ABPA. We review the CT findings of ABPA in this article.

The radiographic manifestations of ABPA is speculative by virtue of nature and stage of the disease. The radiographic findings are generally categorised as transient or permanent. The transient findings include nodules, consolidation, tram track opacities, finger in glove appearance, fleeting densities and permanent abnormalities described are ring shadows, bronchiectasis and pleuropulmonary fibrosis based on the temporal manifestations of the ABPA. In pre CT era, consolidation was believed to be the most common manifestation of the ABPA, in contrast the recent studies prove mucoid impaction as more common finding than the consolidation. In current practice high resolution computed tomography (HRCT) is the imaging modality of choice of evaluation of suspected ABPA patients. The common HRCT manifestations of ABPA are bronchiectasis with or without mucoid impaction, consolidation/s, mosaic attenuation of lungs, centrilobular nodules with or without tree in bud appearance and chronic pleuropulmonary fibrotic changes. Less commonly encountered HRCT manifestations are miliary nodules, perihilar opacities, pulmonary mass and pleural effusion [11]. 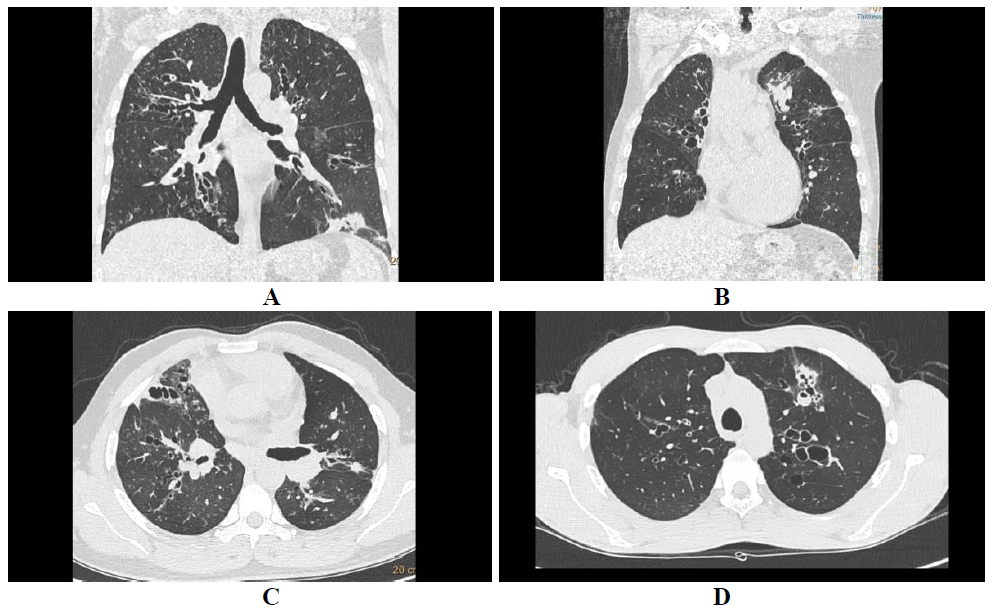 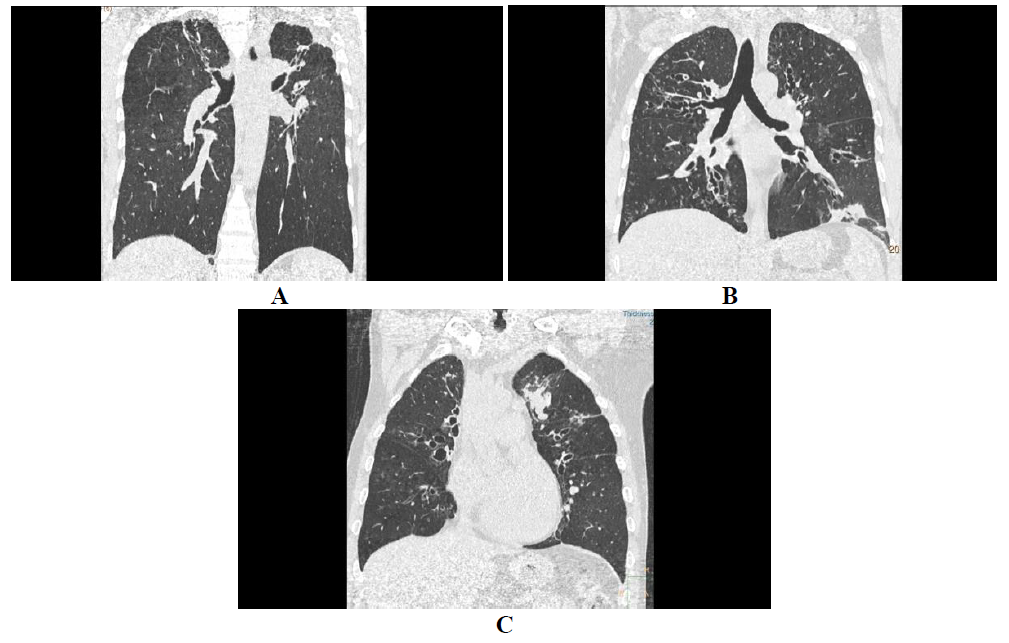 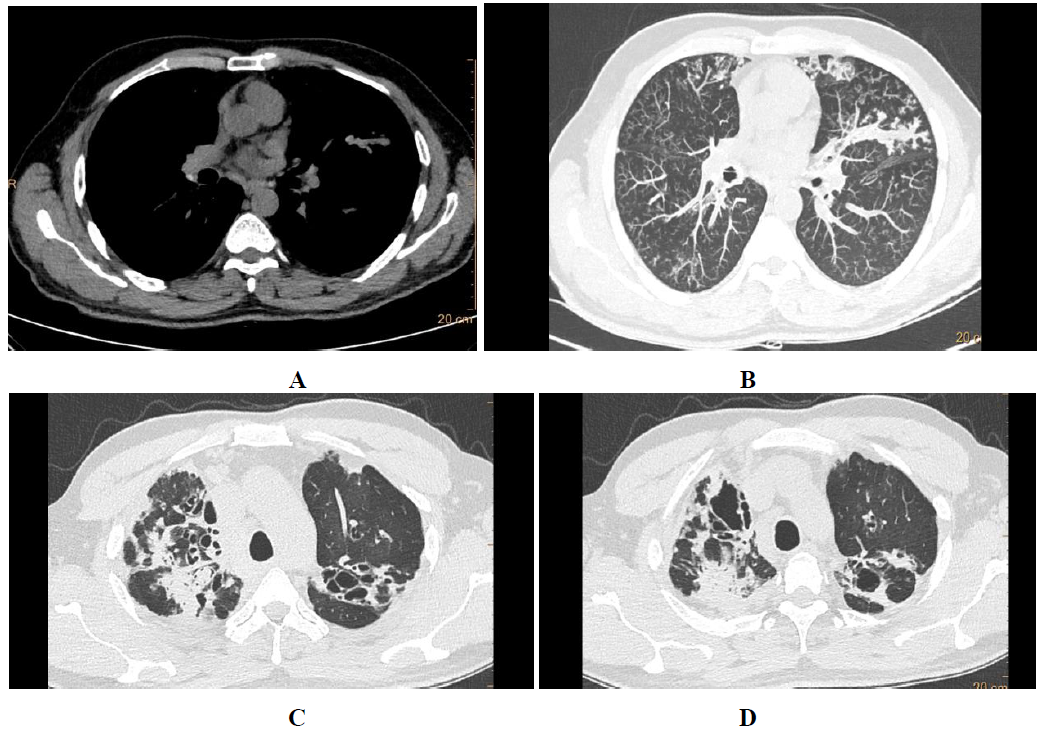 High attenuation mucus (HAM) with attenuation values greater than the soft tissues (para-spinal muscles) and equalling that of calcification is seen in about 20-30% of patients with ABPA [3, 5, 9]. HAM is a specific feature and confirms ABPA as the root cause for bronchiectasis [5]. The high attenuation of the mucus is attributed to the fungal mineral components precipitated within the mucus [1]. The presence of HAM represents immunological severity and also indicates higher chances of relapse [5, 10].

The several researches have strived to classify ABPA on radiological basis, among them recently published International Society for Human and Animal Mycology (ISHAM) working group has classified ABPA based on computed tomography (Table 1), manifestations varying from no significant abnormality, to high attenuation mucus to chronic fibrotic pleuro-parenchymal changes. The HAM criteria closely correlate with the immunological severity. 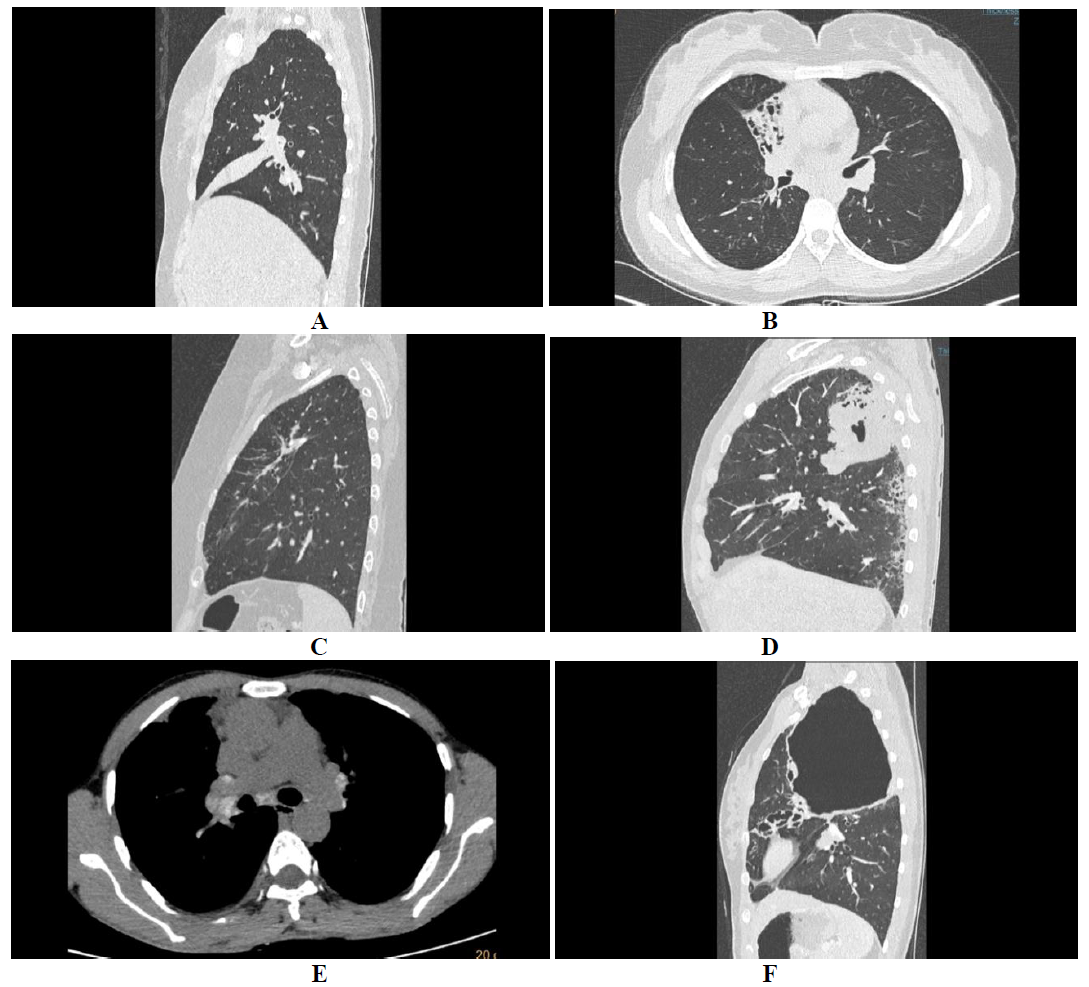 Figure 4: HAM and centri-acinar nodules. HRCT axial average algorithm showing central and peripheral bronchiectasis with high attenuation mucous (HAM) in bronchus of lingual (A), and MIP reformats of the same showing multiple centri-acinar nodules with tree in bud appearance (B).

Serological ABPA is a stage of the disease with normal HRCT chest [5], whereas, bronchiectasis (Figure 1-3) and HAM (Figure 3A) stages are self-explanatory. Chronic pleuropulmonary fibrosis stage (Figure 3C) of ABPA should atleast have two other findings apart from bronchiectasis and HAM, like pulmonary fibrosis (Figure 4), fibrocavitory lesions, mycetoma and thickened pleura [11]. Chronic stages of the disease may present with atelectasis/collapse of lung (Figure 4A), consolidation (Figure 4B), fibrocalcific changes (Figure 4C), consolidation with central break down (fig 4 D), calcific mediastinal or hilar lymphadenopthay (Figure 4E), fibrotic bands (Figure 4F), cavities and cicatricial emphysema. At this stage, distinguishing ABPA from old pulmonary tuberculosis is difficult [9].

Asthmatics and patients with cystic fibrosis without ABPA may have overlapping CT features with that of patients with ABPA. Asthmatics may have a normal HRCT or may show hyper-inflation, bronchiolar wall thickening with narrowing of the bronchiolar lumen and centrilobular nodules representing peribronchiolar inflammation and mucus stasis in the bronchioles. Asthmatics might also show areas of bronchiolar ectasia, mosaic attenuation and air trapping on expiratory scans [3]. HRCT characteristics of two groups of subjects with underlying (n=44) asthma with ABPA (one group) and (n=38) asthma without ABPA (other group) were compared in a study by Ward et al. Bronchiectasis (95%), centrilobular nodules (93%), and mucoid impaction (67%) were more commonly seen in patients with ABPA, compared to the patients without ABPA who showed these characteristics in 29%, 28% and in 4% individuals respectively [12]. Cystic fibrosis related lung disease without ABPA, has several overlapping features with ABPA, but HAM due to its high specificity suggests that the lung disease is due to superimposed ABPA [5].

Pulmonary aspergillosis has varied manifestations. ABPA is the usual presentation in an immunocompetent individual exposed to the fungus. ABPA presents most commonly with central bronchiectasis. HAM is a specific feature of the disease and also helps in disease prognostication. Chronic fibrocavitory stage of the disease is difficult to differentiate from the sequelae of other chronic pulmonary infections like pulmonary tuberculosis.