Rheumatic Heart Disease in A Patient with Hypocomplementemic Urticarial Vasculitis: A Case Based-Review

Background: Hypocomplementemic urticarial vasculitis syndrome (HUVS) is a rare multisystemic autoimmune disease. The cardiac involvement in HUVS, mainly in the heart valves, can be differentiated from late-onset rheumatic fever sequelae with specific criteria, although similarities are observed among these pathologies.

Review: HUVS is an immune complex-mediated small vessel vasculitis involving prominently the skin vessels, synovial membrane and glomeruli. Case reports showing mitro-aortic valve involvement in patients with HUVS raised the possibility of association with post-rheumatic valve disease, corroborating the hypothesis of a common pathophysiological pathway linking HUVS and RHD. The initial treatment of HUVS include corticosteroids, hydroxychloroquine, colchicine and dapsone, however more potent immunosuppressants, such as mycophenolate or immunobiological therapy are often necessary for complete remission of symptoms and weaning from corticosteroid therapy.

Conclusions: Although rare, it is important to consider the association of RHD in patients with HUVS, due to significative changes in the treatment and preventive measures.

Hypocomplementemic Urticarial Vasculitis Syndrome (HUVS) is a rare autoimmune syndrome with multisystem involvement and leukocytoclastic vasculitis, also known as McDuffie syndrome [1]. Apart from the universal cutaneous manifestation (urticarial vasculitis), HUVS may produce systemic symptoms, such as fever, malaise and weight loss and might also involve specific organs or tissues, such as the joints, kidneys, gastrointestinal tract, eyes and lungs. Occasionally, the heart can be involved [2].

Rheumatic fever (RF), on the other hand, is a pathogen-associated immune dysfunction, related to cellular mimicry between host proteins and group A streptococcus (GAS) antigens [3]. The main chronic manifestation of RF is rheumatic heart disease (RHD), an entity that produces fairly specific echocardiographic features, already summarized in a notorious and worldwide recognized diagnostic criteria [4]. The application of these criteria might help to differentiate patients with HUV and valvar manifestations from those with late-onset RF sequelae. It is presented thereby a case of a patient with HUVS and mitral and aortic valve disease, presumably due to RF, followed by a literature review of both entities.

A brazilian 31-year-old male presented with a subacute onset of symmetrical polyarthritis of hands (distal and proximal interphalangeal and metacarpophalangeal joints), feet (metatarsophalangeal joints) and elbows associated with an intermittent and migratory skin rash, that changed location after 24 to 72 hours, often leaving residual hypo or hyperchromia. Also, the patient occasionally complained of intermittent and self-limited swelling of the upper lip and abdominal pain, accompanied by nausea, vomiting and episodes of diarrhea. Physical exam revealed elevated, erythematous and vesicular lesions, with intense itching, spreading from proximal arms to trunk and proximal thighs, mostly sparing the limbs extremities (Figure 1), as well as mild synovitis in the referred joints. There was prominent subluxation of metacarpophalangeal joints and ulnar deviation (Figure 2), easily reversible, though, as it would be expected in Jaccoud’s arthropathy. 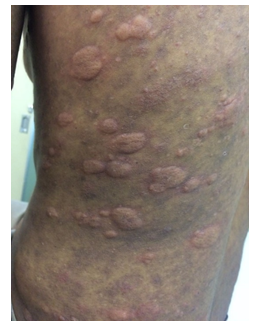 Figure 1: Picture of the trunk of the reported patient with erythematous and elevated plaques. The old lesions had left residual hyperchromic macules. 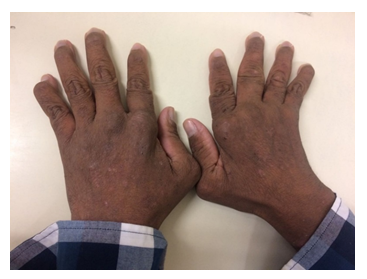 Laboratory analysis showed elevated C-reactive protein and erythrocyte sedimentation rate as well as very low levels of complement fractions C3 and C4. Antinuclear antibodies and rheumatoid factor were repeatedly negative. Radiographs of hands depicted the subluxation observed in physical examination, without erosions. In order to confirm the hypothesis of a vasculitic phenomenon, the patient was submitted to a skin biopsy, revealing dermatitis with subepidermal bubbles containing few neutrophils, associated with dense neutrophil infiltrate in the dermis and leukocytoclastic vasculitis.

After diagnosis, the patient was submitted to multiple treatment regimens, including methotrexate, dapsone and azathioprine, with variable doses of corticosteroids (up to 1 mg/kg/day of prednisone and including intermittent pulse therapies of methylprednisolone), never achieving complete remission. During this 5-year period, the patient evolved with progressive dyspnea on exertion, prompting cardiologic assessment. The echocardiogram showed mitral and aortic abnormalities (further described in Table 1), allowing a secondary diagnosis of RHD. The patient was, then, assigned to antibiotic prophylaxis, diuretics and vasodilators, with plain control of cardiac symptoms.

Finally, the patient was switched to mycophenolate mofetil associated with rituximab. After the first cycle of anti-CD20 therapy, the patient was able to cease glucocorticoids completely and is by the time of this publication in clinical stability, waiting for valve surgery.

2.1 Pathophysiology of HUVS and RF

HUVS is classified as an immune complex-mediated small vessel vasculitis [5]. Therefore, the inciting event that leads to the clinical spectrum seems to be the formation of circulating immune complexes. The targets of humoral autoimmunity are still under investigation, but IgG antibodies targeted against collagen-similar regions of C1q have been already described [6]. These complexes may deposit in small vessel walls and start the complement activation cascade, leading to cell recruitment and tissue damage [7]. Complement fractions may also recruit mast cells, contributing to the vascular permeability that leads to angioedema and urticarial rash [8]. Finally, the presence of urticarial lesions in the IL-1-related autoinflammatory syndromes raised the hypothesis that this interleukin may also contribute to the pathogenesis of HUV. Indeed, an open label study with 10 patients receiving anti-IL-1 therapy highlighted promising results [9].

RF is a pathogen-related immune dysfunction that depends intrinsically on streptococcus exposition. The molecular mimicry between host’s proteins, such as myosin [10] and laminin [11], found in the heart structures, and the streptococcal N-acetyl-beta-D-glucosamine [11] and M proteins [12], plays central role in initiating self-driven immunity. As the destruction of valvar and muscle tissue progresses, the released collagen might also be target of delayed cross-reactivity [3], possibly helping to explain why valve leaflets and tendinous structures can be irreversibly damaged after repetitive GAS infections. Also, chronically affected mitral valves present a disarrangement of structural proteins balance, with elevated levels of vimentin, vitronectin, lumican and apolipoprotein, and reduced levels of collagen VI, haptoglobin­related protein, prolargin, biglycan and cartilage oligomeric matrix protein [13]. These alterations might also contribute to cross-reactivity or long-term valve damage.

HUVS affects more frequently women (ratio 1.5:1) and the peak incidence is seen in the fifth decade of life [14]. HUVS can course with only purely cutaneous manifestation or it can present systemic disease with most commonly involvement of the skin, joints, kidneys and gastrointestinal tract. Occasionally other organ systems are involved [15]. The main manifestation is urticarial vasculitis (UV), characterized by the increased vascular permeability with a leakage of erythrocytes from blood vessels resulting in leukocytoclastic vasculitis. Most often, in opposition to simple urticaria, UV lesions and wheals persist for more than 24 hours and heal leaving brownish residues [16].

The most frequent systemic manifestation is articular, often no more than transient, involving elbows, wrists, knees and ankles. Joint deformities are not common but are possible, especially when cardiac valves are also affected [17], but usually in a Jaccoud’s arthropathy pattern [18]. The kidneys are affected in approximately 50% of patients, being the renal involvement more severe in children [19]. Glomerulonephritis is the main manifestation, presenting with proteinuria, hematuria and cell casts [20]. Histologically it can be seen as membranous, membranoproliferative, or intra and extra capillary glomerulonephritis [20]. Abdominal pain, nausea, vomiting and diarrhea in addition to findings such as ascites, serositis, hepatomegaly and splenomegaly may be found in almost 30% of patients [15]. Pulmonary system may be affected and is the most frequent cause of death among HUVS patients [21], mainly due to obstructive pulmonary disease [21]. Finally, less commonly, ocular involvement, with uveitis, conjunctivitis and episcleritis, as well as cardiac and nervous system manifestations may be observed [15].

As for patients with HUVS and valvar disease, six previous cases were reported in the literature [17,18,22,23], all of them with mitral and aortic involvement. Also, Houser et al. [2] published a histopathological study of three of the previous patients [17,22,23], depicting simultaneous aortic and mitral disease with aortic valve thickening in 2 of the patients. The authors also suggest in the discussion that it was impossible to exclude postrheumatic valvulopathy, despite the lack of rheumatic fever history. The fact that RF, like HUVS, is also associated with Jaccoud arthropathy [24] makes the differentiation between the two syndromes hard – if feasible.

For the diagnosis of HUVS, the typical cutaneous manifestation must be accompanied by decreased complement fractions C3, C4 and also C1q. In addition, anti-C1q antibodies might be observed [6]. Dermal biopsy and cutaneous efflorescence typically evidence leukocytoclastic vasculitis with immunoglobulin and complement deposits in the vessel walls or endothelium involving vessels destruction and deposits of fibrinogen [15].

Although acute rheumatic fever is a disease manly of the childhood and adolescence, RHD most commonly becomes clinical in individuals from 25 to 40 years [25], mostly because the valvar damage is more likely to be caused by repetitive GAS antigen loading to the host. As discussed previously, the mechanisms underlying inflammation and repair in RHD might lead to valvar thickening (especially the anterior leaflet of the mitral valve), reduction of leaflet mobility and chordal dysfunction [4]. These alterations in valve morphology and function may present themselves as a slowly progressive cardiac failure syndrome or may also be asymptomatic for many years. The effective diagnosis of RHD is suspected by heart auscultation and confirmed by heart echocardiography and doppler studies [26]. In addition, it is important to highlight that the main treatment in order to mitigate valvar damage is early antibiotic prophylaxis.

The treatment of HUVS is mainly based in case reports and small retrospective studies and is usually determined by the severity of symptoms and presence of extracutaneous manifestations. In patients with only cutaneous lesions, antihistamines can be used for control of pruritus [27], but are consistently inefficient [28] due to lack of interference with the complement-mediated inflammation and therefore fail to alter the course of the disease. Medications used as a first-line treatment are hydroxychloroquine, colchicine, dapsone or corticosteroids, all with similar efficacy, but less than 50% of patients achieve a complete cutaneous response with these medications alone [28-30]. Immunosuppressive drugs, such as azathioprine, methotrexate, cyclosporine [8] and mycophenolate mofetil [31] can be administered to patients who have not achieved remission of symptoms with the first-line therapy, or to those who have controlled it with a high dose of corticosteroids, in order to avoid it's known side effects. The association of immunosuppressive drugs with corticosteroids appears to be more effective than corticotherapy alone [28].

For those patients who have a severe and/or refractory disease, cyclophosphamide and rituximab have been used with a high response rate [28]. Pulse therapy with dexamethasone [32] or methylprednisolone [33], as well as plasmapheresis [15], were reported to be successful ways to initially control the manifestations of the disease, but with the need of a maintenance therapy such as corticosteroids or immunosuppressives.

We described a case of a patient with presumptive RF, based on the World Heart Federation criteria for RHD, and HUVS. To our knowledge, this is the 7th case of the literature. The importance to consider the diagnosis of rheumatic disease in patients with HUVS and valve manifestations lies in the fact that antibiotic prophylaxis, a relatively simple measure, might prevent further valvar damage.

The study has not received financial support.

Our institutions do not require ethical approval for reporting individual cases or case series.

The patient provided written informed consent for all the data utilized.