Membranous Nephropathy (MN) also known as membranous glomerulonephritis is a slowly progressive kidney disease characterized of subepithelial immune complex deposits and subsequent thickening of glomerular basement membrane. MN is a common cause of proteinuria that may progress to ERDS. The decision to treat MN with immunosuppressive medications is complicated by the well-known natural history of disease and it depends on patient presentation and disease progression. Herein, we present a case of a 48-year-old male patient with weight gain, lower extremity edema, arterial hypertension, and nephrotic range proteinuria (13.5 gr).

The patient was diagnosed with MN 14 years ago with relapses and remission of disease over the years. First immunotherapy was stared with cyclosporine and methylprednisolone, but the patient occurred to have cyclosporine-induced toxicity.

Second immunotherapy was stared with methylprednisolone and cyclophosphamide that resulted in complete remission for 4 years. The disease relapsed again, and the patient was recommended the Rituximab treatment. Two doses of rituximab 1g were administered. In terms of total remission there was no indication for the third dose of rituximab.

Membranous Nephropathy (MN) is one of the main causes of nephrotic syndrome in adults. MN is an antibody-mediated disease, caused by circulating autoantibodies against podocyte antigens [1]. In most cases it is primary.

Phospholipase A2 receptor (PLA2R) is the most important target antigen in membranous nephropathy [2]. Patients with PLA2R negative, might be positive for other antigens target like thrombospondin type-1 domain-containing (7A THSD7A), neural epidermal growth factor-like 1 (NELL-1), semaphorin 3B (Sema 3B) [3].

The clinical course varies from spontaneous remission, persistent nephrotic syndrome, ESRD and post-transplant recurrence. The decision to start immunosuppression therapy relies on the estimated risk of developing progressive kidney disease. Rituximab is the first line treatment in patients with moderate and high risk who have stable renal function.

A 48-year-old male patient came to our attention with weight gain, lower extremity edema, arterial hypertension and nephrotic range proteinuria (13.5 gr). He states that he has been diagnosed with Membranous Nephropathy (MN). His medical history has started in March 2007, when he first presented with nephrotic syndrome. In July 2008 he underwent a renal biopsy that established the diagnosis of membranous nephropathy stage II-III, with presence of Ig G and C3; treatment with chlorambucil and corticosteroids was started and continued for 7 months, with complete remission until November 2011.

The patient was on angiotensin receptor blockers (ARB) therapy at all times, with well controlled blood pressure values below 125/80 mmHg, antilipemic and antiaggregant. In November 2011 the patient relapsed, proteinuria 6 gr was detected. In February 2012 proteinuria increased to 10 gr; therapy with cyclosporine 3mg/kg/d and methylprednisolone 16 gr/day was started. This therapy resulted in remission with proteinuria of 250 mg. After a year he relapsed again and in September 2013, he underwent renal biopsy to re-evaluate the situation, which showed again stage II-III membranous nephropathy and cyclosporine-induced toxicity was identified. In November 2014, he underwent treatment according to the modified Ponticelli scheme with methylprednisolone and cyclophosphamide for 6 months.  Glomerular filtration rate (GFR) in this period was 49 ml/min. Complete remission for 4 years, and then proteinuria begins.

In 2018 the patient relapses again and resumes cyclosporine and methylprednisolone 32 mg. In February 2020 the patient was referred to our department with massive proteinuria, 13.5 gr/24 hours, hypoproteinemia, dyslipidemia and creatinine 1.5 mg/dl, GFR>60 ml/min.  He was tested for PLA2R, which was negative. We recommended the Rituximab treatment. Two doses of rituximab 1g were administered, day 1 and 15. In May 2020, proteinuria 870 mg/24 hours, significant decrease in proteinuria (over 50%). In September 2020, sixth month after starting therapy, the patient shows up for follow-up to decide whether a third dose of rituximab was to be given. In examinations, proteinuria <250 mg/24 h, normal albumin and total protein, creatinine 1.3 mg / dl and GFR 96.7 ml/ min.  In terms of total remission there was no indication for the third dose of rituximab. Last, but not least, our patient was infected with Covid-19, confirmed with RT-PCR of nasopharyngeal swab. Fortunately, he had mild disease treated with support therapy.

Primary MN is an autoimmune disease, organ-specific, mediated by circulating autoantibodies to podocyte antigens. It is classified into primary MN, which comprises 75-80% of cases and into secondary due to autoimmune diseases, hepatitis B, malignancies, thyroiditis, drugs, alloimmune neonatal MN, de novo post-transplant. The natural course of MN patients is variable. About 1/3 of them goes into spontaneous remission, 1/3 remains proteinuric with stable renal function and 1/3 progresses to ESRD, especially those with very high proteinuria [4].  Because a good proportion of patients undergo spontaneous remission it is reasonable to wait 6 months, optimizing anti-proteinuric therapy. MN has been studied quite well the last couple of years and many changes have been made in the KDIGO guidelines in different aspects, starting from its diagnosis, prognosis and treatment. The diagnosis has been revolutionized by the discovery of PLA2R in 2009, published in the New England Journal of Medicine [2].

PLA2 R is a normal protein in podocytes.  In MN the prevalence of finding that anti-PLA2R antibodies is 70-80%. In disease the PLA2R antigen is co-localized with IgG in subepithelial immune deposits. Over the years, renal biopsy has been the gold standard for diagnosis, but remains an invasive method.  Circulating anti-PLA2R antibodies is a very important and specific datum, which has made it possible to diagnose primary MN, when there are clinical clues for it, without the need for renal biopsy, which should be reserved only in special cases such as unusual course of the disease, when anti-PLA2R antibodies levels are declining but nephrotic syndrome persists, or when the patient is receiving immunosuppression but has a rapid decrease in GFR or when antinuclear antibodies are positive [5, 6]. In addition, there is a strong association of anti-PLA2 R with the clinical activity of the disease [7, 8]. Clinicians now can additionally follow a serological marker of disease activity, not only the levels of albumin and proteinuria but also PLA2R which precedes and predicts clinical course of the disease, moreover that changes in its level are detected earlier compared to proteinuria. MN treatment is recently based on strong data following the findings of the MENTOR study, which compared the treatment of MN patients with rituximab and those treated with calcineurin inhibitors, cyclosporine. The study showed, there was a significant difference in the percentage of patients who underwent total remission of the disease for 24 months, compared to patients treated with cyclosporine [8].

In conclusion, our patient had remission in all treatment schemes, but relapsed were rapidly, except after the modified Ponticelli scheme which lasted about 4 years. In our view, taking into consideration patient history and evidence, the best choice in his case was treatment with rituximab. Anti-PLA2R was negative and we were not able to follow its clinical course through antibody levels, but the patient had excellent results after 3 months with significant decrease in proteinuria and total remission after sixth months. Over 60% of patients treated with rituximab have total remission of the disease, a result obtained in the MENTOR study. Recently, The Kidney Disease: Improving Global Outcomes guidelines (KDIGO), recommended rituximab as a drug of choice in relapsed disease. 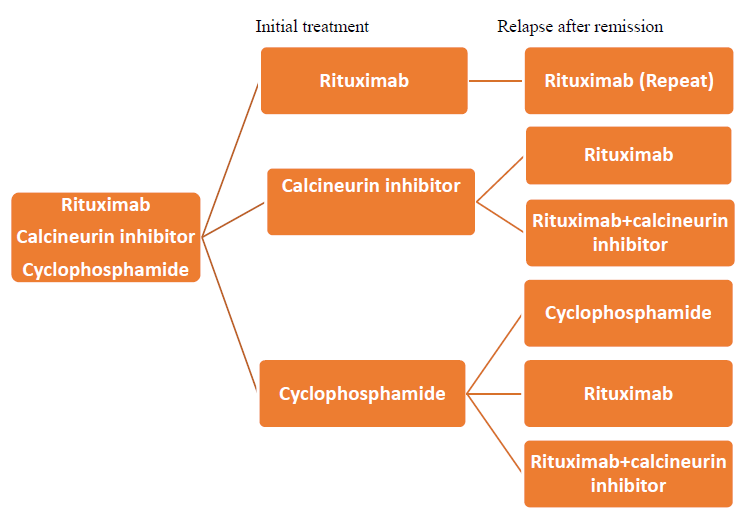 But in the meantime, in October 2020, important information is obtained from the Starmen study regarding the cases of remission under treatment with rituximab + tacrolimus versus those treated with cyclophosphamide + steroids. This study showed cyclophosphamide + steroids to be superior to the rituximab + tacrolimus treatment arm9. Cyclophosphamide has already been proven for years to be an effective treatmet for MN, but its side effects are important, so it should be reserved for high progression risk and resistant cases. It should be avoided if possible in smokers (because of risk for bladder and lung cancer) and patients of child-bearing age. However, the choice of a treatment scheme is made based on evidence, but also by the treating physician, depending on the experience and a good balance between the benefits and the risks of therapy. 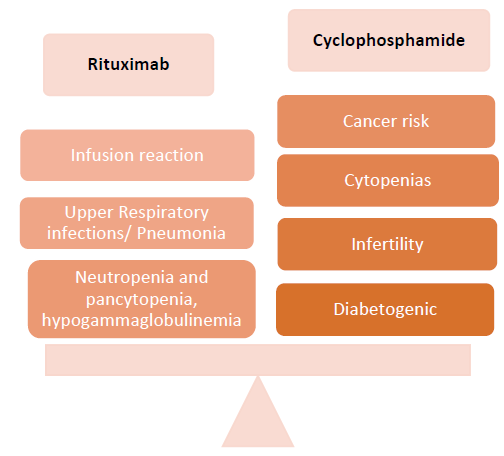 Results from new studies regarding the use of other drugs in MN such as: natural adrenocorticotropic hormone (ACTH), mycophenolate mofetil (MMF), obinutuzumab, plasma exchange are currently pending.

Rituximab (anti B-cell) is a very effective new treatment in the treatment of primary MN. The two studies that support this approach are GEMRITUX and MENTOR. Phospholipase A2 is a serological marker, which not only precedes and predicts the clinical signs, but also shows the activity of the pathology. Nephrologist should be familiar with all therapy options in order to offer patients the treatment with the best risk: benefit ratio, guided by clear algorithms published by KDIGO and Toronto Group.