An otherwise healthy 24-year-old female presented to the Emergency Department referring right iliac Fossa and hypogastrium pain, with anorexia. Her clinical, laboratory and radiologic results indicated the possibility of an inflamed appendix. The patient underwent laboratory and ultrasonographic control. The initial diagnosis was acute appendicitis and therefore she was led to the operating theatre, where a typical appendectomy was performed. The patient was asymptomatic, but a great amount of a milk-like fluid was drained through the drainage tube. CT imaging was decided and revealed a mesenteric cyst, which was resected via a midline incision.

Mesenteric cysts are rare entities, presenting with a variety of clinical manifestations. They were first described by Benevieni in 1507, after performing an autopsy on an eight-year-old male [1]. They are diagnosed in approximately 1 out of 100.000 hospital admissions. Usually, they located in the mesentery or mesocolon, as well as in the omentum and in the retroperitoneal space [2, 3]. The ratio between males and females is 1.4:1 and the mean decade of their diagnosis is the fifth [4]. Several classifications have been proposed, based on the content and the etiology. Metaxas et al. suggested a categorization, based exclusively on histopathological findings, while in 2015, Abdelaal et al. proposed a new modification [5, 6] (Table 1).

Table 1: Categorization of the origin of a mesenteric cyst, based on the modifications proposed by Abdelaal et al. [6].

Their clinical presentation is nonspecific and most patients complain of abdominal pain, nausea and vomiting, constipation or diarrhea and a palpable abdominal mass in the case of large ones [7]. Usually, mesenteric cysts appear as benign lesions, whereas less than 3% are of malignant behavior [8]. Common complications are torsion, rupture, hemorrhage, infection, and intestinal obstruction [9].

Our patient suffered a ruptured chylous mesenteric pseudocyst, while its content contaminated the peritoneal cavity and consequently the appendix, causing appendicitis-like symptomatology. To our knowledge this is the first case of ruptured mesenteric cyst mimicking acute appendicitis. We will analyze the diagnostic and treatment algorithm followed, as well as the follow-up results.

A 24-year-old Caucasian female was admitted to the outpatient Surgical Department due to an increasing abdominal pain, mainly in the right iliac fossa and hypogastrium. She was feeling nauseous and referred loss of appetite for the past day without episodes of vomiting and could not recall any similar incidence in the past. Her medical history was unremarkable and she was on the 19th day of her menstrual cycle. The patient was afebrile and clinical examination revealed tenderness in her lower abdomen and right lower quadrant. McBurney, Rovsing and Blumberg signs were all positive, whereas Lanz and bilateral Giordano signs were negative.

Laboratory results revealed leukocytosis (W.B.C.: 16.100/μL) and C.R.P. was almost normal 0.8 mg/dl (normal< 0.5 m). Ultrasound of the lower abdomen and internal reproductive organs revealed free fluid in the pouch of Douglas, as well as between the intestinal loops (Figure 1). The radiologist mentioned that the patient felt an 8/10 pain, while the U/S probe was pressing the right iliac fossa.

Figure 1: Ultrasound examination of the lower abdomen showed free fluid in the pouch of Douglas.

Taking those results into consideration, a decision to operate the patient was made. The patient was thoroughly informed about her clinical condition. Once the patient gave her written consent, she was led to the operating theatre where a McBurney incision was performed, because laparoscopy was not feasible for technical reasons. After entering the peritoneal cavity, more than 500 milliliters of a clayish fluid came out of the incision plain. A sample was kept for biochemical and bacterial contamination control, so that we could distinguish if the fluid was of lymphatic or purulent origin. A Meckel’s diverticulum or other pathology was not detected at the distal 60cm of the ileum. The peritoneal cavity was thoroughly washed and a conventional appendectomy was safely performed. A corrugated drainage pipe was placed in the Douglas space. The patient retuned to our clinic. Histopathological examination showed serositis of the appendix. Although the patient was asymptomatic, 400 milliliters of the same consistency as intraoperatively, gushed through the drainage pipe in total, during the first 24 hours postoperative hours. Biochemical control of the peritoneal fluid is summarized in Table 2.

Taking those results into consideration, along with the negative bacterial culture, we suspected that the fluid may have a lymphatic origin. An abdominal Computed Tomography (C.T.). was performed 30 hours post-op and showed a 5.5 × 5.1 × 3.2 cm thin-walled cystic lesion containing fluid with a heterogeneous pattern in the left lower abdomen, behind the rectus abdominis muscle (Figure 2). Surgical re-intervention was decided, so the patient underwent a re-laparotomy through a subumbilical incision 40 hours after the first operation. First, complete drainage of the remaining fluid and removal of the pseudomembranes in the pouch of Douglas and among the small intestinal loops was performed. The cystic lesion was identified, inflamed and ruptured between the jejunal mesentery layers, approximately one meter distally from the ligament of Treitz (Figure 3a, 3b). The lesion was excised via ultrasound HARMONIC ACE® within healthy and borders and without the need for a small bowel resection, while the mesenteric vessels remained intact. Histopathological examination of the specimen revealed a cyst wall with signs of chronic inflammation. Its inner border was ischemic, covered with foamy mast cells and fibrous deposits. There were no signs of malignancy. Eventually, the patient was discharged the 3rd postoperative day after the re-laparotomy, afebrile and in a good clinical condition. Follow-up examination was performed six and twelve postoperative months. During the second follow-up, Computed Tomography of the Abdomen showed no abnormal lesion and no signs of recurrence. In the meantime, the patient did not refer any underlying symptomatology. 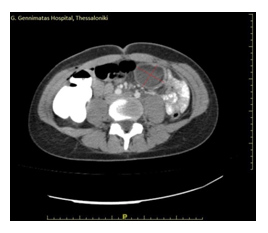 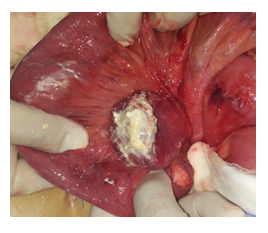 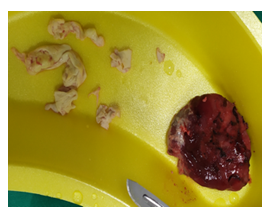 Histologically, as in this case, pseudocysts are usually covered in a thick fibrous wall, whereas no inner epithelial lining can be found. Based on Table 1 and the histopathological examination of the excised specimen, the cyst belongs to two categories simultaneously: Cysts of lymphatic origin and non-pancreatic pseudocysts. Based on this result, we suggest that this categorization could be revised.

To our knowledge, this is the first case study reporting a ruptured mesenteric pseudocyst, imposed an urgent need for immediate surgical treatment, since it mimicked the clinical manifestation of acute appendicitis. Even though the first operation was uneventful, reoperation was decided due to the composition of the fluid coming from the drainage pipe, while the patient was completely stable. The second operation revealed the presence of a ruptured chylous mesenteric pseudocyst. We suspect that, due to the rupture, the free intraperitoneal chylous fluid triggered inflammatory response, leading to sterile peritonitis. This assumption could explain not only the inflammation of the appendix, but also the pseudomembranes found in the peritoneal cavity.

We highlight the importance of diagnostic laparoscopy instead of laparotomy, since it can help us visualize the whole abdominal cavity in case of diagnostic dilemmas, whereas the traditional McBurney incision did not offer such opportunity, especially in women of reproductive with unspecific low-abdominal pain. In this patient, laparoscopy could help us perform appendectomy and cystectomy in one operation.

Although several treatment methods, such as aspiration, marsupialization and surgical excision, have been proposed throughout the years, surgical treatment stills remains the treatment of choice, since the other interventional methods are associated with complications and recurrence [10. More precisely, enucleation of the cyst is the gold standard [11]. In our case, surgical intervention was inevitable, since the cyst was already ruptured. In case of mesenteric vessel involvement, enterectomy or resection of the adjacent tissues may be mandatory [12]. In our patient, a simple cystectomy was enough, since intraoperative diaphanoscopy of the adjacent jejunal mesentery revealed sufficient residual vascularization.

Mesenteric pseudocysts, when ruptured, may mimic the clinical and laboratory findings of acute appendicitis, thus, if free milk-like fluid is detected in the peritoneal cavity, the surgeon has to figure out if it is purulent or lymphatic. An abdominal Computed Tomography may provide useful information regarding the differential diagnosis, if there is high suspicion prior to the operation. In such cases, we suggest that surgical excision is the only effective treatment.

We obtained a written consent from the patient, concerning her treatment, as well as the right to publish this case report and the respective images. Furthermore, we also obtained the approval from the Ethics Committee of the Hospital.