Sclerosing Mesenteritis Presenting with Small Bowel Obstruction in a Patient with Compensated Cirrhosis: A Case Report

Sclerosing Mesenteritis (SM) is a rare fibroinflammatory disease of unknown etiology in which intestinal obstruction results from encasement of variable lengths of bowel by a dense fibrocollagenous membrane that gives the appearance of a cocoon. To our knowledge no cases of SM have been reported in patients with compensated cirrhosis without ascites. We report a case with SM diagnosed at laparotomy due to rapidly worsening small bowel obstruction, in a patient with compensated alcoholic cirrhosis. A 50-yearsold Caucasian male was evaluated because of cramping abdominal pain and discomfort associated with diarrhea, occasional post-prandial vomiting, fatigue and a significant weight loss. Compensated alcoholic cirrhosis had been diagnosed, two months before current presentation. Physical examination revealed abdominal distention with highpitched metallic sounds and bilateral peripheral pedal edema. Computed tomography of the abdomen demonstrated severe dilated small bowel loops as well as fluid into the peritoneal cavity. Based on the imaging findings, a surgical procedure was carried out. During laparotomy, an extra fibrous layer fully surrounding the small intestine was divided and a side-to-side functional ileo-cecum anastomosis was performed. Histopathological examination revealed fibroconnective tissue proliferation and inflammatory infiltration. Combined with the characteristic surgical findings a diagnosis of SM was made in a patient with compensated alcoholic cirrhosis. The patient recovered uneventfully and at 6-month follow-up he had no symptoms or signs of SM recurrence. The insidious onset of bowel obstruction symptoms in patients with even compensated cirrhosis, should include SM in the differential diagnosis.

Sclerosing Mesenteritis (SM) is a rare fibroinflammatory disease of unknown etiology in which intestinal obstruction results from encasement of variable lengths of bowel by a dense fibrocollagenous membrane that gives the appearance of a cocoon. This membrane encases partially or completely predominately the small bowel, but can also extend to involve other intraperitoneal organs including colon, liver, stomach, appendix and ovaries among others. In the majority of cases, SM involves the root of the small bowel mesentery, but occasionally it may also involve the sigmoid mesentery, the mesocolon, the peripancreatic space, parts of the omentum, the retroperitoneum or the pelvic cavity [1, 2]. Depending on the etiopathogenesis and the pathological characteristics of the encasing membrane, SM can be classified as primary (idiopathic), secondary or congenital [3]. Peritoneal dialysis (PD) is the most common cause of secondary SM [4, 5]. Other causes include prior abdominal surgery, beta-blocker treatment, peritoneovenous shunting (PVS) and decompensated cirrhosis complicated by spontaneous bacterial peritonitis (SBP) [3-11]. To our knowledge no cases of SM have been reported in patients with compensated cirrhosis without ascites. We report a case with SM diagnosed at laparotomy due to rapidly worsening small bowel obstruction, in a patient with compensated alcoholic cirrhosis.

A 50-years-old Caucasian male was evaluated in the outpatient clinic because of cramping abdominal pain and discomfort associated with diarrhea, occasional post-prandial vomiting, fatigue and a significant weight loss of 9 kg over the previous two months. Compensated alcoholic cirrhosis had been diagnosed [based on abdominal computed tomography (CT)], two months before current presentation. He had no history of abdominal or pelvic surgery. The patient had a 15-year history of daily alcohol consumption and a 40-pack year smoking history. Medications included magnesium, vitamin tablets, rifaximin and proton pump inhibitor (PPI). He lived with his wife and daughter in an urban area of Greece. Physical examination revealed abdominal distention with high-pitched metallic sounds and bilateral peripheral pedal edema. A large right inguinal hernia was also present. Patient’s vital signs were normal. Laboratory test results are summarized in Table 1. Significantly elevated C-reactive protein, normocytic norm-ochromic anemia, electrolyte disorders and hypoalbum-inemia were the most significant laboratory abnormalities.

A contrast-enhanced CT of the abdomen demonstrated severe dilated small bowel loops as well as fluid into the peritoneal cavity (Figure 2). Magnetic resonance (MR) enterography revealed dilated loops of the small intestine without an obvious obstructive cause. The patient was immediately referred to the Surgery Service and a surgical procedure was carried out. Exploration through a midline incision revealed marked dilatation of the small intestine (Figure 3) and the presence of intra-abdominal fluid. The last 10 cm of the terminal ileum appeared collapsed, but no evident cause of obstruction (such as tumor or adhesions) was identified, according to the CT findings (Figure 4). While inspecting carefully the area, an extra fibrous layer was identified which fully surrounded the small intestine. Initially, it was thought to be the intestinal serosa.

The division of the cocoon was performed with Metzenbaum scissors and electrocautery. The encapsulated intestine follows a tortuous course within the cocoon, with some bowel segments being stenotic while others being dilated. The surgical team decided to resect the collapsed segment of the terminal ileum. On attempting to mobilize the ascending colon, it was noted that it was also encapsulated by a similar fibrous layer (Figure 5). This cocoon-like membrane was divided at its anterior surface and a side-to-side functional ileocecal anastomosis was subsequently performed.

Histopathological examination of the colonic cocoon revealed fibroconnective tissue proliferation and inflammatory infiltration. Although the patient was diagnosed with alcoholic cirrhosis, his postoperative course was uncomplicated. The patient was discharged from the hospital after 7 days. At a 6-month follow-up, he had no symptoms or signs of SM recurrence. 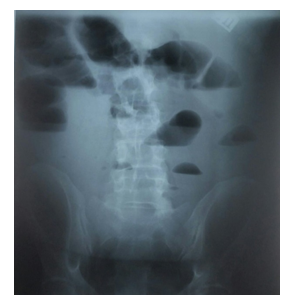 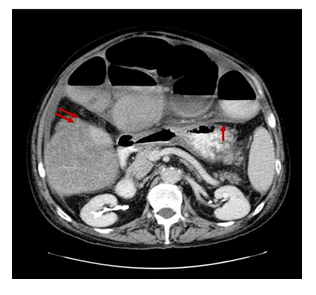 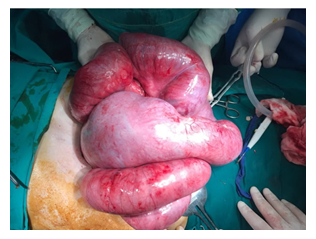 Figure 3: Intraoperative View during Laparotomy: Intraoperative view of the dilated small bowel loops encased by a thick fibrocollagenous membrane with a cocoon-like appearance. At first sight this membrane was thought to be the intestinal serosa of the dilated small bowel loops but after incision it was noted that these loops were actually entrapped by the fibrotic membrane. 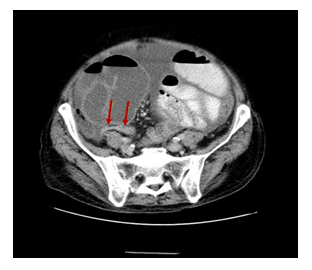 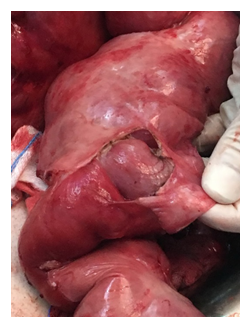 Figure 5: Intraoperative View During Laparotomy After Division of the Membrane: The appearance of the encased dilated small bowel loops and the thick grayish-white fibrotic membrane.

This rare cause of abdominal obstruction was first reported by Owtschinnikow in 1907 and was coined the term “peritonitis chronic fibrosa incapsulata” [12]. The idiopathic form is also known as abdominal cocoon which was first described by Foo et al [13] in 1978. On the basis of the predominant histology and in order to better describe this clinicopathologic entity the following terms have also been used: mesenteric lipodystrophy (predominantly fatty degeneration and necrosis), mesenteric panniculitis (marked chronic inflammation) and retractile mesenteritis (predominant fibrosis). Many authors have proposed the umbrella term sclerosing mesenteritis (SM) which can be used for all sub-categories of this entity [14].

In primary SM, no demonstrable cause is identified; the role of cytokines and fibroblasts in the development of peritoneal fibrosis and neoangiogenesis has been hypothesized [1, 3]. Idiopathic SM classically presents in young adolescent girls in tropical and subtropical countries [1-3], although cases of idiopathic SM in adult males in temperate zones have also been reported [2, 15, 16]. A systematic review of 192 cases of SM conducted by Sharma et al [14] showed that men were more commonly affected than women (70% vs 30%) and the majority of patients were Caucasians (60%). The median age at diagnosis was 61 years. Similar results were reported in a retrospective/ prospective study of 92 patients diagnosed at Mayo Clinic [17] and also in a retrospective study of 65 Chinese patients with abdominal cocoon [18].

In cirrhotic patients SM has been described after PVS and in those treated with beta-blockers [7-10]. It should also be included in the differential diagnosis in cirrhotic patients with recurrent intraabdominal infection, such as SBP, who present with symptoms of intestinal obstruction [11]. Moreover, it is known that SM can occur as a consequence of persistent low-grade peritonitis and may complicate the postoperative course after liver transplantation [20, 21]. However our patient was diagnosed with compensated alcoholic cirrhosis (Child-Pugh A score) and had neither of these conditions. The early clinical features of SM are non-specific and often not recognized. Clinically it presents with recurrent episodes of acute, subacute or chronic gastrointestinal obstruction (complete or incomplete), nausea, vomiting, fever, anorexia, appetite loss, weight loss and malnutrition [1-3, 14, 17, 18, 22, 23]. These symptoms were also present in our patient. A painless and soft abdominal mass can also be palpated in some patients, while others (10%) may be asymptomatic [1-3, 14, 25, 26]. In some cases, abdominal distension was secondary to ascites [17, 27]. Gastrointestinal perforation is quite rare in patients with SM [27]. However, a few case reports describe patients with protein losing enteropathy [28, 29] and also with IgG4-related disease suggesting that SM [30, 31] may have severe clinical manifestations.

Additionally, in a case series of patients with SM, the authors described a possible relationship between SM and disturbance of glucose metabolism [32]. Notably, our patient experienced symptoms of partial bowel obstruction for a relatively short period of time (approximatelly 2 months). Retrospective assessment of the abdominal CT showed that the cocoon was already present at the time of diagnosis of cirrhosis (Figure 6). However pre-operative diagnosis of SM is a real diagnostic challenge even for experienced clinicians. During laparotomy, it is difficult to distinguish the fibrotic membrane from the intestinal serosa, as in our case (Figure 3 and 5). 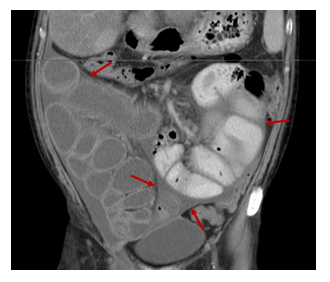 Diagnosis of SM is a diagnostic challenge and requires a high index of clinical suspicion. It can be facilitated by the patient’s history, existing predisposing factors, various biochemical parameters and radiological imaging. A better awareness of this rare clinical entity and the imaging findings may facilitate pre-operative diagnosis, which is critical for selecting the appropriate surgical intervention or even avoid the need for surgery and instead apply immunosuppressive drug therapy. There are case reports in the literature in which treatment with corticosteroids led to alleviation of the obstruction symptoms and improvement of the disease course. Our case suggests that the insidious onset of bowel obstruction symptoms in a cirrhotic patient, even if cirrhosis is compensated and uncomplicated, should include SM in the differential diagnosis.

No potential conflict of interest