Self-Strangulation by Vehicle-Assisted Ligature Without Decapitation: A Case Report and A Review of the Literature

Background: Self-strangulation with a vehicle-assisted ligature is reported to be very uncommon suicidal method. Related cases are rarely published, and many of them report massive injuries to neck organs, and even complete decapitation.

Case presentation: We report an unusual case of self-strangulation where a body was found dead inside a car with a rope around his neck and tied to an electric pole behind the car. The rope didn’t break while the car moved away, and no decapitation was associated. The manner of death was determined as suicide based on a complete criminal investigation supported by a detailed crime scene investigation and autopsy.

Conclusion: This case is reported for its originality due to the unusual method of suicide employed by the victim, and because it was not related to decapitation.

Cases of self-strangulation by vehicle assisted ligature are clearly exceptional and continue to attract attention of the scientific community for the intellectual insights that these cases provide to literature [1, 2].Moreover, the wide prevalent belief that it is very difficult to carry out self-strangulation as a mean of suicide, makes every case of self-strangulation suspicious and challenging for the forensic pathologist, more specifically when it occurs in a vehicle. Evaluation of the manner of death in such cases of ligature strangulation can be an extremely complex objective [3], and the eventuality of suicide masquerading a homicide must be constantly present in mind. Examination of the vehicle and the crime scene must be carried out carefully. The autopsy can be relevant for the diagnosis mainly when it shows vital massive injuries to neck organs.

Here we present an unusual case of self-strangulation by a vehicle-assisted ligature. This case has a double originality. In addition to the rarity of the suicidal method employed, the lack of decapitation, frequently observed in such cases, makes this case interesting. We discuss here the mechanism of death, and explain the absence of decapitation, reviewing related literature.

A 53 year old male was found dead in his automobile near his house by a neighbor. He was a married daily worker, with a history of asthma, open heart surgery for unspecified cardiac disease, and depression. No previous suicidal attempt was reported by the relatives. At death scene investigation, the victim was seated in the driver seat. The body was slightly elevated from seat, with the head leaning back, and the feet on the floor of the car near the driving pedals. He was not wearing the seat belt. A blue nylon rope, measuring 15 mm in diameter, surrounded the victim’s neck, and exited the vehicle through the rear passenger's open door. The opposite end of the ligature was fastened to the base of an electric pole located behind the car, at its left side. The distance between the vehicle and the pole was about 5 meters. The rope was tight but not broken (Figure 1-3). The car engine had stopped with the ignition still on. There were tire marks on ground, which were compatible with tires of the victim’s car. Death scene investigation did not reveal findings related to struggling or existence of a second person at the scene. No suicide note was founding the victim’s belongings. The external inspection showed an asphyxial syndrome, associated with a unique horizontal cervical mark, corresponding to the used rope, discontinuous in the area of the knot which was located on the right back of the neck. It was brownish-red in color and its consistency was hard and parchment-like (Figure 4). No other injuries like defense wounds were found on the body and no needle puncture sites or tracks were identified.

Internal examination revealed an ecchymotic fracture on the left thyroid horn. The hyoid bone and the trachea were intact.The lungs and the brain was edematous and congested (Figure 5). No traces of alcohol or drugs were detected in toxicological analyses. Death was attributed to vehicle assisted ligature strangulation. The manner of death was determined as suicidal. 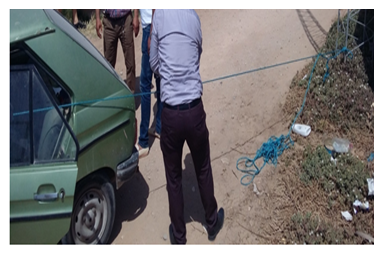 Figure 1: Scene of death: The free end of the rope ligature exited the vehicle through the rear passenger's open door and tied to the base of an electric pole. 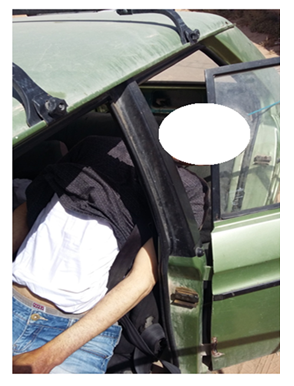 Figure 2: Position of the victim in the driver seat, slightly elevated from seat, head leaning back. 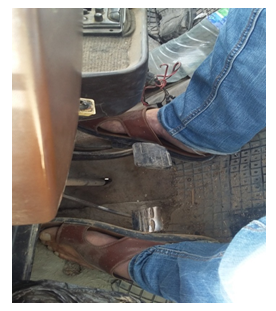 Figure 3: Position of the victim: the feet on the floor near the driving pedals. 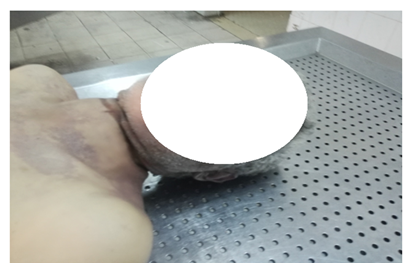 Figure 4:Ligature mark: a unique horizontal cervical mark, discontinuous in the area of the knot (the right back of the neck). 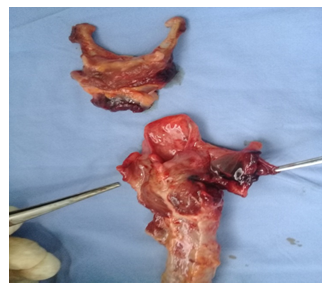 Our case concerned a man who was found dead in his car, a rope around his neck. The rope free end was fixed to the base of an electric pole. The main difficulty for forensic pathologists when managing ligature strangulation is to establish the manner of death, and the mechanism of death. It's based on the fact that ligature strangulation is a very well-known method of homicide, and a very uncommon method of suicide [4-5].This suicidal method supposes the use of a specific montage to exercise on the neck a constrictive force to cause death. In fact, a victim committing suicide by ligature strangulation often proves to be very resourceful in finding or devising the lethal ligature [6].

The assessment of a self-strangulation, with regard to the manner of death, is based on an analysis of the scene investigation and the injury pattern [1]. Concerning the crime scene findings, ligature strangulation cases discovered in a secured area, with presence of suicide note, previous suicide ideation and attempts, history of mental illnesses, and catastrophic events in the victim’s recent life, might be indicative of suicide. Similarly, in our case, the deceased was found dead in his automobile near his house, with no evidences of struggle and no findings indicating the body was moved after death. At external examination, cervical marks and injuries (among them decapitation), are highly suggestive. For the internal examination data, haemorrhages and lacerations of sternocleidomastoid muscle, hyoid bone fractures, tracheal and/or esophageal ruptures/lacerations, carotid artery lacerations/ruptures, thyroid cartilage fractures, soft tissue hemorrhages of neck, cervical vertebrae fractures, lung edema and other signs of asphyxia are among reported findings seen in vehicle-assisted ligature strangulation cases [9-11, 16]. Although rare, the previously published references of vehicle assisted ligature reported decapitation as the most massive cervical injury observed in vehicle-assisted ligature strangulation cases[7-9].

In our case, the sternocleidomastoid muscle hemorrhage and the ecchymotic fractures on the left thyroid horn attest the vital origin of the injuries. To sum up, all the collected data strongly supported the hypothesis of a suicidal death by vehicle-assisted ligature.

In our case, the downward rolling automobile exerted traction on the rope causing constriction on the neck organs leading to asphyxia. The horizontal cervical mark proove strangulation (and not hanging) as the mechanism of asphyxia. Vehicle-assisted ligature strangulation cases are rarely reported in literature [1, 9-14]. Some authors have reported decapitation as the mechanism of death [7, 8, 15-17], unlike our case. At the best of our knowledge, only 7 cases of vehicle-assisted ligature strangulation without decapitation have been reported so far in the literature.

The occurrence of decapitation in vehicle-assisted ligature strangulation cases is in relation to many factors such as width and strength of the ligature material, running engine and slope of the road [1]. Two main conditions can lead to complete decapitation. First of all, during free fall (uniformly accelerated motion), the body acquires kinetic energy (determined by body weight and the squared velocity of the fall), which results in separating the head from the body [16, 18]. A high driving speed by maintaining a fixed support in the accelerator can lead to a high kinetic energy of the body. Second, the strength of the human neck tissue, and the duration of the so-called impact are also crucial factors for decapitation. The impact duration time can be determined relatively accurately from the mechanical properties of the rope used. The more elastic the rope, the more it stretches during the dynamic shock, thus resulting in longer impact time, and vice versa: the less elastic the rope, the conditions for decapitation are more favorable, since the impact time is shorter and thus the impact force is greater [16]. Generally, post strangulation decapitation is typically associated with a relatively thin ligature of poor stretchability (e.g., nylon rope, electric cable, wire).

In our case, apart from the characteristics of the ligature, the absence of decapitation can be explained by the low kinetic energy of the vehicle in the absence of a device maintaining a fixed support in the accelerator, the rough nature of the ground, and the absence of a slope in the road.

Presented here is a case of suicidal vehicle assisted ligature strangulation, some autopsy findings and a review of previous reports. In such cases, the manner of death should be determined based on a complete criminal scene investigation supported by anamnesis and autopsy in order to not miss a camouflaged crime.