Strongyloides Presenting as an Ulcerated Gastrointestinal Mass and Pulmonary Nodules in a Chronic Alcoholic: A Case Report

Strongyloidiasis is a parasitic infection of various clinical manifestations by the helminth Strongyloides stercoralis, with immunocompromised patients at higher risk for more severe cases. It is uncommonly seen in the United States, with a majority of patients without symptoms. In immigrant patients of immunocompromised state that initially present with nonspecific clinical manifestations, the inclusion of parasitic infections on the differential is crucial to initiate appropriate treatment as early as possible. We report a case of hyperinfection of Strongyloidiasis, which unusually presented with a gastrointestinal ulcerated mass and pulmonary nodules.

Strongyloidiasis is a soil-transmitted disease by the helminth Strongyloides stercoralis, or sometimes by S. fuelleborni fuelleborni and S. fuelleborni kelleyi [1]. Infections in humans manifest in a wide range of presentations, from asymptomatic to fatal, disseminated cases. Initial infection and transmission occur transcutaneously: eggs from contaminated soil hatch and mature into filariform larvae that penetrate human skin and migrate to the intestines, most classic migratory mechanism being via bloodstream and respiratory tracts [2]. However, S. stercoralis has the survival advantage to cause asexual autoinfection within the human host intestine, allowing for chronic infections without a need for contact with another infective larvae [3]. Thus, patients can present with pulmonary, gastrointestinal or cutaneous symptoms depending on organ involvement that may persist for decades, especially in immunocompromised hosts that lack a robust immune system to prevent autoinfection [4].

The disease is currently estimated to have infected 30-100 million people worldwide [5]. The precise prevalence rate is unknown due to asymptomatic infections as well as low sensitivity of screening tests [6]. Infections occur in endemic or non-endemic regions, including pockets of United States that are concentrated with immigrant or veteran populations. High prevalence has been observed in Latin America and sub-Saharan Africa, with infection rates of up to 60% seen in such resource-poor countries [7]. Populations that are at higher risk of Strongyloidiasis include men, patients with HIV and HTLV-1 infections, as well as alcoholics [8, 9].

Clinical manifestations of infected individuals vary widely, with acute infections within a week commonly presenting with cough, tracheal irritation, and gastrointestinal symptoms including watery diarrhea, nausea and vomiting, bleeding, and diffuse abdominal tenderness [1]. Some cases of cardiopulmonary symptoms such as chest pain, palpitations, and dyspnea have also been observed [10-12]. Hyperinfection of S. stercoralis and disseminated Strongyloidiasis differ in whether manifestations remain within the gastrointestinal and pulmonary systems or not, respectively, although both require intensive medical care and have high rates of mortality if untreated. Currently in medical literature, approximately 244 case reports of hyperinfection and disseminated Strongyloidiasis exist [13]. Among those cases, endoscopic findings revealed duodenal mucosal edema, erythema, ulcerations, and obstructions etc [14]. No cases of duodenojejunal mass with pulmonary nodules have yet to be reported, despite increasing numbers of unusual manifestations in S. stercoralis hyperinfection syndromes. Here, we report a 43 year-old male from Guatemala diagnosed with hyperinfection of Strongyloidiasis that presented with a duodenojejunal mass and pulmonary micronodules on imaging.

A 43 year-old man from Guatemala with a history of chronic alcohol use and gastritis presented with 2 days of melena. The patient had no constitutional symptoms. He had a similar episode of melena 6 years prior in Guatemala, where he underwent an endoscopy and was told he had gastritis and anemia. The patient denied any other medical history or medication use, except for occasional over-the-counter pain medicine of name he was unable to recall. Prior to immigrating to the United States in 2019, he reported to have worked on a banana farm for several years. Upon arrival to the emergency department, the patient was hypotensive and tachycardic. His abdomen was soft but had generalized tenderness to palpation without any clinical manifestations of cirrhosis. Laboratory analysis revealed WBC 15.9 103/mL, absolute eosinophils 270 cells/mL, hemoglobin 7.3 g/dL, BUN 39.0 mg/dL, and positive fecal occult blood. The patient was given multiple units of packed red blood cells to stabilize the acute blood loss anemia. CT chest, abdomen, and pelvis showed a 3 cm heterogeneously enhancing mass in the intestinal tract (Figure 1A) and small, scattered pulmonary nodules (Figure 1B). An EGD revealed an ulcerated, bleeding submucosal mass at the duodenojejunal junction (Figure 2). Histopathology of the biopsied mass was remarkable for parasitic strongyloides worms (Figure 3). The patient was diagnosed with hyperinfection syndrome of Strongyloidiasis, and was started on an extended course of ivermectin 200 mcg/kg/day.

Figure 1: CT scan of the chest, abdomen, and pelvis showing (A) the jejunal mass and (B) pulmonary micronodules. 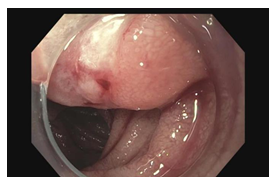 Figure 2: Endoscopic image of ulcerated mass in the jejunum. 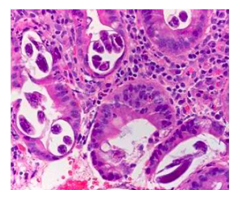 Strongyloidiasis generally presents with gastrointestinal, pulmonary and cutaneous symptoms; most common symptoms observed have been abdominal pain, diarrhea and weight loss [15]. However, there have been numerous reports of unusual presentations, including gastrointestinal obstructions. Prior obstructions have been secondary to either severe edema or inflammation-induced fibrosis causing narrowing of the intestinal lumen. Majority of obstructive findings have occurred in the duodenum or colon [14, 16-18], both phenomena are rare in clinical presentation. Our patient presented with an ulcerated mass that was initially concerning for malignancy, such as GIST (gastrointestinal stromal tumor) or neuroendocrine tumor. The mass seen on endoscopy was the source of the gastrointestinal bleed that led to multiple blood transfusions, which demonstrates the severity of the helminth infestation. Ulcerations throughout the intestinal tract have been reported [1], however no cases of an ulcerated, bleeding mass currently exist in medical literature.

In regards to pulmonary involvement in hyperinfection syndrome or disseminated strongyloidiasis, observational studies have found that chest imaging frequently reveals fine miliary nodules or diffuse reticular infiltrates, especially in the initial phase of the infection [19, 20]. Meanwhile, patchy, diffuse lobar infiltrates are seen with infection progression, as well as alveolar or mucosal hemorrhage of the pulmonary lining [1]. In this patient, the chest CT showed small, scattered pulmonary nodules, suggesting either an initial phase or an unusual presentation of a chronic, persistent infection. Another possible explanation is autoinfection by S. stercoralis in high-risk individuals--recurrent infections can result in cyclical findings of initial infection, depending on time of diagnosis.

Our patient had an initial absolute eosinophil count of only 270 cells/mL (with greater than 500 generally indicating eosinophilia in adults), however, studies have discovered that eosinophil count has a low sensitivity, although commonly used as a screening method [21]. Moreover, in comparison to stool and serological testing combined, eosinophil count did not significantly improve diagnostic accuracy [22]. Interestingly, serological IgG antibody testing was also negative in our patient. This can be attributed to several factors: antibody levels decreasing with chronicity or immunocompromised status [6], or alcoholic patients producing different immunoglobulins in response to the helminth infection [23].

As mentioned above, severe cases occur more often in patients in immunocompromised states such as those with HIV and HTLV-1 infections. We hypothesize that our patient’s chronic alcohol use promoted a relatively immunocompromised state. A meta-analysis of prior case-control and cross-sectional studies have found that alcoholics have a significantly higher rate of infection, with a pooled OR of 6.69 (95% CI 1.47-33.8) [8]. Chronic alcohol use is associated with poor hygiene in some patients as well as malnutrition that contribute to breakdown of immune defenses to eliminate the parasite. Several studies have shown that the level of immune system impairment in alcoholics can occur at multiple levels: reduced number of macrophages in the duodenal mucosa, loss of T-cell lymphocyte function and cytokine production, and most importantly, decreased activity of the complement system which has been proposed to be the first-line defense against the helminth [24]. Another study finding suggests chronic alcohol use can lead to alteration of corticosteroid metabolites that can increase infectivity of the S. stercoralis larvae and accelerate autoinfection [25]. We believe the patient’s environmental exposure on a banana farm in Guatemala as well as long-term alcohol use led to chronic Strongyloidiasis.

Hyperinfection syndromes, like in our patient, are fatal without prompt treatment; mortality rate has been calculated as high as 86% [15]. Thus, it is highly recommended to initiate treatment early. Parasitological cure has been shown to be higher with ivermectin than albendazole (RR 1.79, 95% CI 1.55 to 2.08) [26]. In immunocompetent patients, a single-dose or two-dose regimen of 200 mcg/kg per day is recommended; alternatively, immunocompromised patients will need a four-dose regimen of 200 mcg/kg daily for two days, repeated at two weeks, which is the time period of an autoinfection cycle. Our patient was started on the extended course of ivermectin, given his hyperinfection diagnosis and immunocompromised state due to chronic alcohol use.

This case of Strongyloides hyperinfection syndrome in a patient with a history of chronic alcohol use manifested in an unusual pattern of a bleeding, ulcerated duodenojejunal mass and scattered pulmonary micronodules. Presentations of either findings are rare, and this specific case highlights the wide range of clinical manifestations of Strongyloidiasis. It is also important to note that Strongyloidiasis infection rate has been shown to be positively associated with chronic alcohol use, immunocompromised status, and immigrants, particularly from endemic regions. With the rise in unusual presentations of these infections, it may be appropriate to consider parasitic involvement in patients with risk factors, especially those with findings of gastrointestinal and pulmonary abnormalities.

Data are available at the Cedars Sinai Medical Center.

The authors have no competing interests or conflicts to declare.

No funding was obtained for this report.

Both authors made substantial contributions to conception, drafting, revising and approving the manuscript for publication.