Serous cystadenomas of the pancreas are a common entity in patients with von Hippel-Lindau (vHL) disease. However, to date, only thirteen cases of pancreatic cystic lesions causing obstructive jaundice in vHL patients have been reported in the literature, and these were the result of distal CBD stricture. In this study, we present a rare first case report of multiple large pancreatic serous cystadenomas causing obstructive jaundice via extrinsic compression of the mid CBD in a 27-year-old female with vHL. Biliary decompression has been successfully achieved with ERCP and stent placement, with serial stent exchanges every 2 months. Given the patient’s young age and the morbidity associated with total pancreatectomy, we have elected to pursue a more conservative approach to her biliary obstruction via serial stent exchanges until they are no longer successful at achieving decompression, at which point we will proceed with surgical intervention such as biliary bypass or total pancreatectomy.

Von Hippel Lindau (vHL) disease is an autosomal dominant inherited disorder characterized by the mutation in the VHL gene, which results in the formation of multiple tumors and cysts throughout the body, notably the brain, kidneys, and pancreas. The range of manifestations of vHL disease is extensive. About 40 different lesions in 14 different organs have been described. These include retinal and central nervous system (CNS) hemangioblastomas, endolymphatic sac tumors, renal cysts and tumors, pancreatic cysts and tumors, pheochromocytomas, and epididymal cystadenomas [1]. Over 70% of patients with vHL have a propensity to develop multiple pancreatic cysts2. Obstructive jaundice has been reported in association with vHL as a result of either extrinsic compression of the distal CBD or inflammatory stricture. Attempting conservative management for these cysts via biliary decompression with stents has been described as the standard of care, as these lesions have no malignant potential, and biliary bypass and total pancreatectomy carry considerable degrees of morbidity and mortality. Thus, here we present a case report of the conservative management of a mid CBD stricture due to extrinsic compression from large pancreatic serous cystadenomas in a patient with vHL.

A 27-year-old female was referred to the HPB (Hepato- Pancreatico-Biliary) surgery service at our tertiary referral hospital, Community Regional Medical Center (CRMC) in Fresno, CA, for evaluation of symptomatic cholelithiasis. Subsequently, she was admitted with nausea, vomiting and oral intake intolerance. Detailed history and physical examination revealed, history of diabetes, obesity, depression and intermittent post-prandial nausea and vomiting, worse with greasy foods. On laboratory workup, she had a mild elevation in transaminases and mild leukocytosis, and normal total bilirubin and lipase. On US abdomen imaging, she had possible small gallstones, normal gallbladder wall, and CBD dilation to 12.9 mm. On HIDA imaging, she had decreased gallbladder ejection fraction of 15%, consistent with biliary dyskinesia. 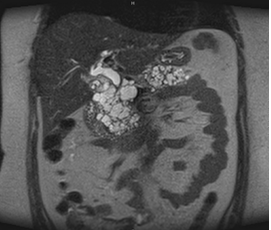 Based on her significant symptomatology, she underwent laparoscopic cholecystectomy with intraoperative ultrasound, revealing near-complete replacement of the pancreatic parenchyma with cysts. She tolerated the procedure well and was discharge home post-operatively. She is also status post robotic partial nephrectomy to address her RCCs. 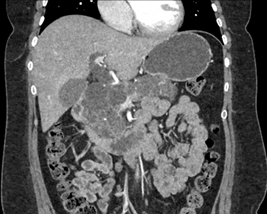 Four months later, she re-presented to CRMC for evaluation of obstructive jaundice. She complained of severe epigastric abdominal pain radiating to her back, as well as acholic stools. On laboratory workup, she had elevated transaminases and a total bilirubin of 2.4 (direct 1.7), with a normal lipase. On CT imaging, she was found to have a dilated proximal CBD to 16 mm likely due to extrinsic compression of a short-segment mid CBD by innumerable large pancreatic cysts (Figure 2). She underwent endoscopic retrograde cholangiopancreatography (ERCP) with sphincterotomy and 6-French plastic stent placement by GI. She tolerated the procedure well and was discharge home after normalization of her LFTs and resolution of symptoms (Figure 3). 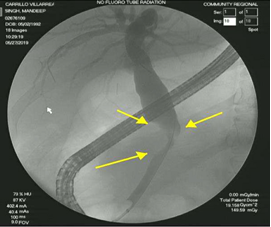 Since that time, the patient has undergone serial ERCPs every 2 months, with removal and replacement of the temporary biliary stents. Her symptoms of biliary obstruction have resolved with this conservative management. However, the mid CBD stricture has persisted despite repeated stent placements (Figure 4). 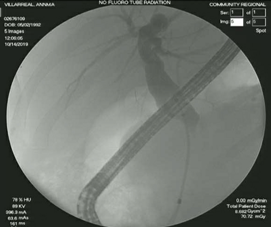 Figure 4: 6-month follow up of ERCP with stent exchange.

Cystic lesions of the pancreas carry no malignant potential in vHL, and as a result, these patients do not require operative resection unless they develop biliary obstructive symptoms that cannot be managed via endoscopic stent placement [2, 3]. While there have only been thirteen cases of obstructive jaundice developing in vHL patients as a result of extrinsic distal biliary compression by pancreatic cysts, to date, this is the first report of mid biliary compression by pancreatic cysts [4-10].

This patient serves as a successful example of management of biliary obstruction in vHL disease by endoscopic decompression, sphincterotomy and stent placement with serial stent exchanges. This approach is especially beneficial in younger patients, as the morbidity and mortality associated with surgical biliary bypass or total pancreatectomy have the potential to severely limit the longevity and quality of life in these populations [11]. Furthermore, given the advances in endoscopic interventions as well as surveillance modalities for potential malignancy, conservative management in these cases constitutes a safe and effective plan of care. Thus, we present a rare case report of multiple serous cystadenomas of the pancreas causing mid CBD obstruction with jaundice in a vHL patient, which has been successfully managed with endoscopic decompression with stenting.

Authors do not have any conflict of interest “None Declared” in this research.