Background: Vaping-related lung injuries are of great concern, particularly among those who vape tetrahydrocannabinol (THC). Research also indicates that THC use increases the risk of developing psychotic disorders, particularly with use of high potency THC.

Case Presentation: The case of a 20-year-old female with a history of depression and daily vaping of THC is presented. She was medically hospitalized and treated for a vaping-related lung injury, followed by a psychiatric hospitalization for treatment of depression and suicidal ideation. The patient endorsed new-onset psychotic symptoms which required targeted treatment. A second psychiatric hospitalization ensued after an intervening suicide attempt.

Conclusions: Vaping of THC poses clear risks to the physical health of its users, including vaping-related lung injury. Although the patient presented in this case recovered from her lung injury, her subsequent need for psychiatric treatment also highlights the detrimental effects from vaping THC on mental health, ranging from depression to psychotic symptoms and even to suicidality.

E-cigarette vaping associated lung injury (EVALI) was first recognized by the Centers for Disease Control (CDC) in August 2019 after receiving reports from state and local health departments of a novel respiratory disease associated with the use of e-cigarettes [1]. In September 2019, the incidence of the disease peaked, with 116 emergency department (ED) visits/million and 215 hospital admissions/week due to EVALI [1].

As of February 18, 2020, there have been 2,807 EVALI hospitalizations reported to the CDC with 68 deaths [2]. While EVALI pathophysiology is subject to debate, the majority of cases occur in patients reporting vaping tetrahydrocannabinol(THC) [1,3]. THC consumption in adolescence and young adulthood is strongly associated with the development of psychotic disorders, including schizophrenia, and is an established preventable risk factor for psychiatric illness [4,5]. This report presents a case of a previously healthy 20-year-old female with new onset psychosis and suicidality, requiring prolonged inpatient psychiatric treatment following a hospitalization for EVALI. To our knowledge this report is the first known case of psychosis and suicidality reported following EVALI. Patient provided consent and authorization for Pine Rest psychiatrists and researchers to access their health information for this case report. 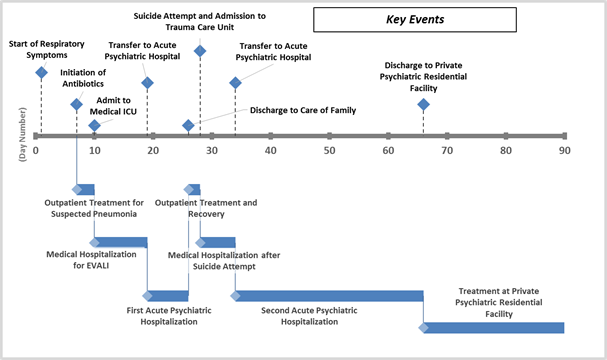 Figure 1: Key events in the patient’s disease progression, treatment and recovery spanning her multiple hospitalizations. The timeline starts at the onset of respiratory symptoms (Day 1). In-text references are made to this timeline throughout the patient case description. 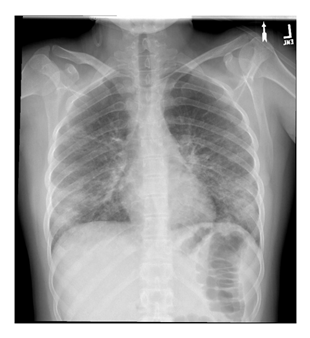 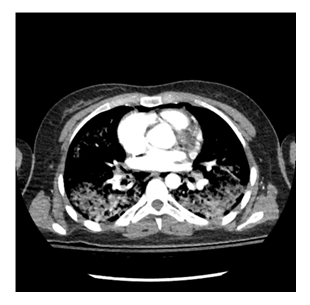 On psychiatric hospital admission (day 19), patient described a long history of depression with the current episode precipitated by her mother’s death from opiate overdose four months prior and recent separation from her boyfriend. She endorsed self-medicating her depression over this time with daily THC use. She described suicidal thoughts, history of self-harm by cutting and one previous suicide attempt. She presented with flat affect, disorganized thought patterns and appeared internally preoccupied, although she denied auditory or visual hallucinations. Her primary diagnosis was major depressive disorder, recurrent, severe, with psychotic features, with additional diagnosis of cannabis use disorder, severe. Prednisone taper was continued. Sertraline 25 mg daily was started (day 20) for depression but was discontinued due to facial rash. Due to increasing concern for psychosis, patient was started on olanzapine 2.5 mg nightly (day 24) which resulted in improvement in both psychotic and depressive symptoms. She reported a significant decrease in suicidal thoughts and her father felt that she had markedly improved in her mental state. Given the patient’s apparent improvement, she was determined safe to return home with a plan to follow up with an established outpatient psychiatric provider (day 26).

Upon re-admission to the medical hospital (day 28) following a suicide attempt by stabbing, electrocution, and poisoning two days following discharge from the psychiatric facility, patient reported minimizing her symptoms of depression during the previous psychiatric hospitalization and that she experienced suicidal thoughts throughout that hospitalization. Patient waited for her father to leave for work and then stabbed herself several times in her left breast, abdomen, left wrist and neck. She reported drinking one half bottle of PineSolTM (The Clorox Company, Oakland, CA), and filled a bathtub with water and attempted to electrocute herself by placing cords from electrical appliances in the water. She was found by her father upon returning home and transported to the ED. On presentation, she was somnolent but arousable, tachycardic and hypotensive with blood pressure in the range of 90’s systolic over 50’s diastolic. She was otherwise hemodynamically stable. Exploratory trauma surgery demonstrated a small tracheal laceration and imaging showed a small left pneumothorax. Labs were consistent with anion gap metabolic acidosis, leukocytosis, and hypokalemia. Urine toxicology was positive for cannabinoids, but she denied THC use since before her first medical hospitalization for EVALI. Patient was intubated and monitored in the trauma care unit where she stabilized, and lab abnormalities were corrected. Olanzapine 2.5 mg nightly and the prednisone taper were continued. Following medical stabilization, the patient was again discharged to the inpatient psychiatric facility (day 34).

On the second psychiatric admission, the patient noted worsening suicidal thoughts and demonstrated thought disorganization, paranoia and delusional beliefs. She denied auditory or visual hallucinations. The diagnosis of major depressive disorder, recurrent, severe, with psychotic features was maintained. Olanzapine was discontinued and replaced with quetiapine (day 35) for mood and psychotic symptoms which was titrated to 600 mg nightly. Gabapentin 100 mg was started as needed for anxiety (day 39). Fluoxetine was added for depression (day 48) and titrated to 60 mg daily. Patient demonstrated significant improvement in mood and psychotic symptoms once medications were titrated to effective dosages. Some ongoing passive suicidal thoughts were noted, but the patient’s presentation and affect were significantly improved. She was stable for discharge to continue treatment at a private, long-term residential psychiatric facility (day 66).

We present the case of a 20-year-old female with a history of daily THC vaping and depression who developed EVALI requiring ICU treatment, with subsequent psychiatric inpatient treatment for suicidal ideation expressed during medical hospitalization. Psychiatrically, the patient was noted to demonstrate new-onset psychotic symptoms in the context of acutely worsening depression and recent lung injury. Patient minimized her symptoms during her first psychiatric hospitalization and attempted suicide by several methods following discharge, resulting in rapid readmission following medical treatment. This onset of psychosis and suicidality is unique, as we are not aware of any previously reported such cases associated with EVALI.

Despite a recent decreasing incidence of acute cases, EVALI continues to be of immense clinical concern as the pathophysiology of the disease remains poorly understood [6]. Theories include lung injury facilitated by acute inflammation, atypical pneumonitis and lipoid or eosinophilic pneumonia [7]. Vitamin E acetate is an additive compound found in e-cigarette solutions that is strongly linked to EVALI, as it has been found in bronchoalveolar lavage fluid in 94% of cases [7]. A related concern is that vaping rates among adolescents and young adults have been increasing. Monitoring the Future Study January 2019 found 41% of high school seniors endorsed vaping of any kind in the past year, compared to 34% in 2016 [8]. In 2019, 21% of high school seniors reported vaping marijuana within the past year as opposed to 10% in 2017 [9]. Considering the increased popularity of vaping THC among adolescents and young adults, there should be continued concern for EVALI as the majority of cases are associated with vaping THC [1,3].

Additionally, there is a well-known link between THC use and the development of psychotic disorders such as schizophrenia, with high potency THC increasing this risk substantially [4,5]. Evidence suggests that those who consume THC are three times as likely as those who do not to develop psychosis, while high potency THC increases this risk sixfold [10]. Drug Enforcement Administration estimates average THC content of vaping solutions at 52% compared to the 13% of cannabis flower [11]. The association between THC use and chronic psychosis is also stronger with heavy or frequent use during adolescence, earlier use, and use of high potency THC [5]. With 9% of 8th grade students reporting ever vaping THC and 4% of seniors reporting near daily use, this population is clearly vulnerable to the development of psychotic disorders secondary to vaping THC [9].

This case highlights concerns associated with vaping high potency THC, and the potential risks vaping poses to both the physical and mental well-being of adolescents and young adults. It serves to further support the literature and understanding of EVALI and its sequelae. The patient’s presentation with significant psychotic symptoms and suicidality in the context of EVALI is novel, warranting further research into the frequency and possible etiology of this phenomenon.