Thoracic outlet syndrome (TOS) is a rare disease that presents with neurogenic and vascular symptoms and is caused by compression of the brachial plexus and/or subclavian vessels as they pass through the cervico thoraco brachial region. However, making the diagnosis of TOS can be challenging due to a lack of standardized objective confirmatory tests. We present three cases of neurovascular TOS where electrophysiological exploration was conducted to develop the diagnose.

The thoracic outlet includes three confined spaces extending from the cervical spine and mediastinum to the lower border of the pectoralis minor muscle. The three compartments are the interscalene triangle, the costoclavicular space, and the retropectoralis minor space. The subclavian artery and the brachial plexus pass through these spaces. The subclavian vein does not cross the interscalene triangle, but runs beneath the anterior scalene before joining the internal jugular vein to form the brachiocephalic vein [1]. TOS classifications are based on the pathophysiology of symptoms with subgroups consisting of neurogenic (nTOS), venous (vTOS), and arterial (aTOS) etiologies. nTOS is by far the most common, representing about 95% of cases [2]. Numerous mechanisms elicit the characteristic pathology of TOS, including trauma, repetitive motions, and anatomic variations [3].

Patients with NTOS often present with pain, paresthesia, weakness, or numbness in the upper limbs. Symptoms of VTOS include acute pain, arm swelling, and blue discoloration. ATOS accounts for less than 5% of all TOS cases. Affected patients often experience arm pain, weakness, coolness, pallor, and paresthesia [4-6]. Making the diagnosis of TOS can be challenging, as criteria are controversial, and currently, there are no confirmatory tests, which commonly lead to delayed diagnosis in clinical practice [7]. A meticulous physical examination of potential TOS patients is a basic step in establishing a TOS diagnosis, followed by the collection of evidence related to history and clinical manifestations. Maneuvers such as the Adson, Wright, and Roos tests, as well as hyperabduction, can support the diagnosis. Imaging can also be helpful in confirming suspected cases of TOS. Anatomical abnormalities are demonstrated in radiographs. For suspected vascular TOS, ultrasound maintains high sensitivity and specificity, is noninvasive and inexpensive, and should be the initial imaging test of choice. CT or MR angiography can differentiate equivocal cases or provide additional anatomic detail required for surgical planning [8]. This case reports shows the importance of a meticulous examination and the use of imaging in the diagnosis of TOS. 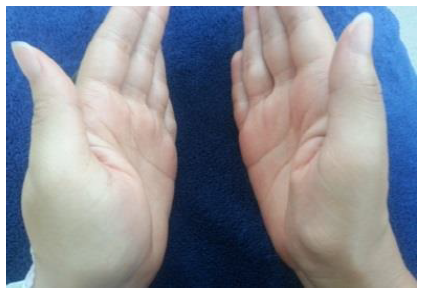 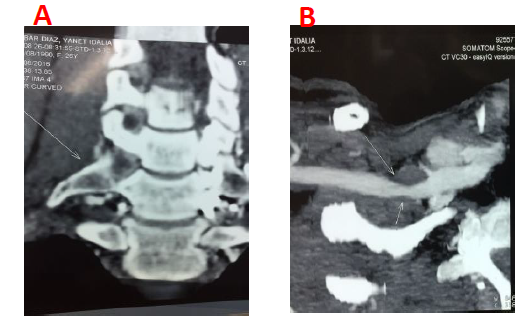 Figure 3: Accessory right cervical rib (A). Compression of the right subclavian artery by the scalene muscle (B). 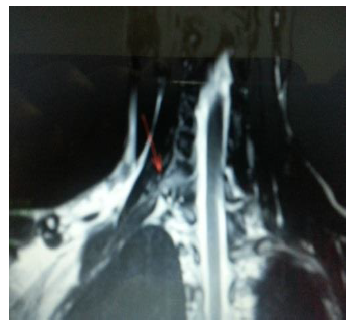 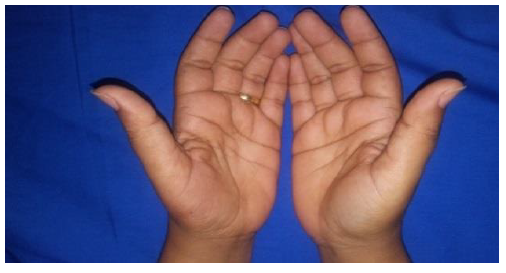 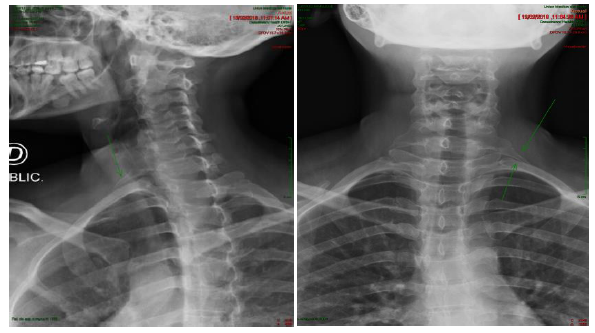 The third case is a 22-year-old female presented with episodes of conscience alteration and paresthesia in C8- T1 territory of the left upper limb. No involuntary movements or sphincter relaxation. Adson and Ross tests were positive on the left side. No ptosis, miosis, anhidrosis or atrophy of the hands was observed. EMG of the upper limbs revealed no abnormalities. Suspicion for thoracic outlet syndrome prompted Angio MRI study, which revealed impingement of the left subclavian artery due to an extrinsic compression of the scalene muscle. 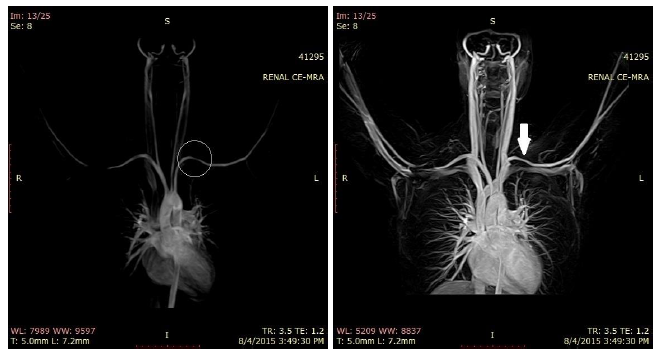 The initial presentation depends on structure primarily compressed, neurogenic, vascular, or a combination of both. Symptomatic patterns can be purely vascular, neurogenic, or nonspecific-type thoracic outlet syndrome. The vascular variant is rare and occurs due to the subclavian artery or vein compression and tends to occur in young individuals who perform heavily overhead arm activity. Upper extremity swelling, diffuse pain and venous distention are usual presentations in case of venous obstruction Whereas, patients with predominantly arterial obstruction frequently report upper extremity claudication, color changes, or constant dull pain. However, due to the presence of collateral circulation, most of the patient does not seek medical attention until the advanced stage of the disease, such as ulceration and gangrene. Chronic ischemia may result in generalized upper limb wasting. Nevertheless, as in one our cases, specific thenar atrophy is an infrequent and unusual presentation of the mixed variant of thoracic outlet syndrome. Neurogenic thoracic outlet syndrome involves the brachial plexus compression. A pure neurogenic variety is also unusual, and overhead arm activity is the contributing factor regardless. Most of the patients with nerve compression report difficulty grasping objects or hand weakness due to intrinsic muscle weakness. Moreover, pain, paraesthesia, and sensory loss are also reported frequently. However, isolated thenar atrophy is rarely seen, and may lead to a missed diagnosis. The nonspecific variant of thoracic outlet syndrome denotes a large group of patients with unexplained arm, shoulder, and neck pain.

Thoracic outlet syndrome is diagnosed by a combination of history, physical examination findings, and imaging. Physical examination findings are primarily related to the structure affected, thus the type of thoracic outlet syndrome. Depending on the variant suspected, patients are assessed with a variety of physical examinations that aid in confirming the diagnosis. Standard tests for neurogenic variants include Adson’s maneuver or the elevated arm stress test, and Elvey’s test, also known as the upper extremity tension test. In the Adson’s maneuver, the radial pulse is felt following the complete arm abduction and holding above the head. Elvey’s test is also performed similarly to provoke the symptoms. Dermatomal sensory test is also performed to demonstrate sensory disturbances as nerve compression in the thoracic outlet is considered to be exacerbated during this upper extremity tension test.

The vascular-thoracic outlet syndrome has distinct physical findings depending on whether the vein or artery is affected. Patients with predominant venous compression show edema and cyanosis of the upper extremity. Dilated superficial veins in the forearm, arm, shoulder, or chest also frequently demonstrated. Predominant arterial compression is characteristically presented with pallor, a diminished or absent pulse, and cold upper extremity. Blood pressure drop greater than 20 mm Hg in the affected side is also a reliable indicator of arterial involvement. In rare instances, small ischemic ulcers are noted in the hands and fingers. The classic physical examination finding in patients with neurogenic thoracic outlet syndrome includes atrophy of thenar, interosseous and hypothenar muscles along with reduced sensation along the ulnar nerve distribution as the lower trunk involve more frequently than the upper trunk.

Electrodiagnostic studies are helpful when neurogenic thoracic outlet syndrome is highly suspect and useful when the results are positive. However, a negative test does not rule out the diagnosis. The most important findings on electroneuromyography evaluation of neurogenic outlet thoracic are signs brachial plexus lower primary trunk lesion as: medial brachial cutaneous and ulnar sensitive’s branches alterations, and neurogenic atrophy signs on the C8-T1 muscular territories. Nerve conduction velocity less than 85 m/s of either the ulnar or median nerves while crossing the thoracic outlet and has found to correlate the clinical diagnosis. Whereas, the conduction velocity of lower than 60 m/s is considered an indication for intervention. The somatosensory evoked potential is also considered as a useful diagnostic test, although controversial.

Conservative treatment with rest, NSAIDs, cervicoscapular strengthening exercises is effective in most patients. Additional modalities of conservative care can be installed as transcutaneous nerve stimulation and biofeedback. In general, surgical intervention and decompression should be considered for the patient’s refractory to conservative care, presented with acute vascular complications or progressive neurologic dysfunction. However, surgical decompression is indicated in patients with atrophy of hand muscles primarily due to thoracic outlet syndrome regardless of the neurovascular exam finding, as done in our cases. The thoracic outlet can be accessed by a trans-axillary or supraclavicular approach depending on the surgeon's preference. Either of these approaches sufficiently allow supraclavicular decompression.

The diagnosis of TOS remains challenging due to its varied clinical manifestations and lack of confirmatory testing and generally accepted diagnostic criteria. Based on this case reports and the reviewed literature, to optimize the diagnosis and treatment of the Thoracic outlet syndrome clinicians may suspect it when patients present episodes of altered consciousness and thenar atrophy and also be aware of the use of imaging techniques such as cervical spine or chest radiograph, CT angiography (CTA) and magnetic resonance angiography (MRA) as important tools in order to help to elucidate the diagnosis.